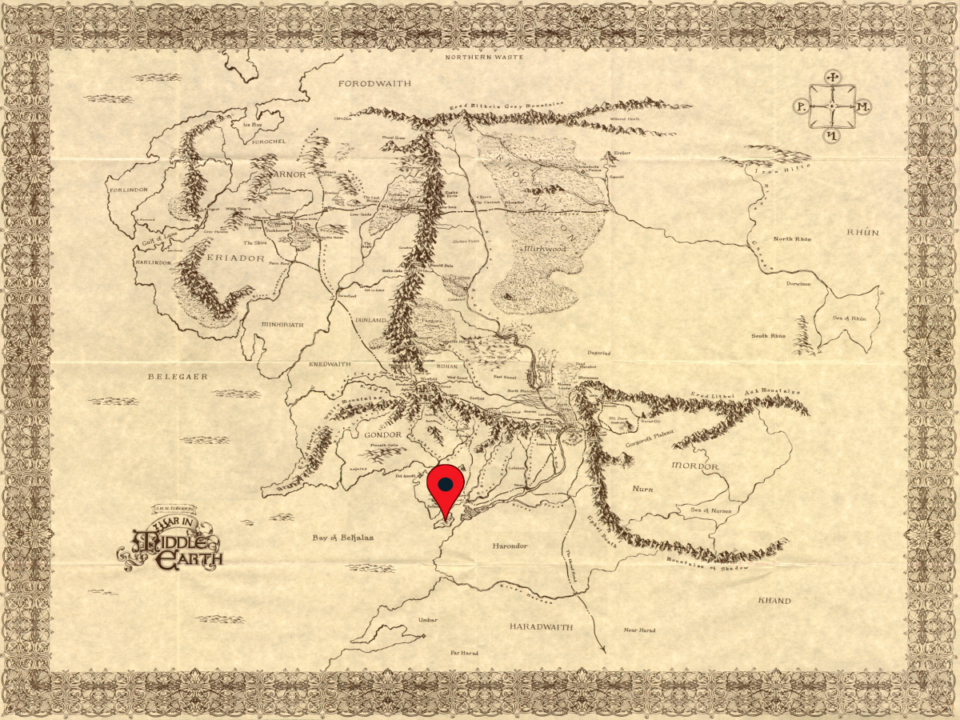 This month I’ll be discussing the solitary Isle of Tolfalas in the Bay of Belfalas.

These were much changed in the tumult of the winds and seas that followed the Downfall; for in some places the sea rode in upon the land, and in others it piled up new coasts. Thus while Lindon suffered great loss, the Bay of Belfalas was much filled at the east and south, so that Pelargir which had been only a few miles from the sea was left far inland, and Anduin carved a new path by many mouths to the Bay. But the Isle of Tolfalas was almost destroyed, and was left at last like a barren and lonely mountain in the water not far from the issue of the River.

Aside from the lost isle of Meneltarma (the last remnant of the storied land of Numenor) there were few islands thought to be in the great sea to the West of Middle Earth.  In the north there were the Western Isles of Himling, Tol Fuin and Tol Morwen.  And in the South there was only Tolfalas.

Tolfalas (Sindarin for “coastal island”) was a rather large island, fifty miles long and 25 miles wide.  It lay only forty miles from the mouth of the mighty Anduin, between the Cape of Belfalas to the North and Harandor to the South before the waters opened into the Bay of Belfalas proper.  Its sides, formed from a mountainous island capsized in the aftermath of the Downfall of Numenor, were steep and jutted out of the waters to only increase in elevation at the peaked interior of the island.  It was a rocky place, and yet the mountaintops had crumbled through the centuries and new vegetation dotted its rocky slopes by the time of the end of the third age.

Tolfalas was also the last line of defense against seaborn invaders before they could reach the mouths of the Anduin delta just south of the lands of Lebennin.  As one of the southernmost reaches of the great kingdom of Gondor, a watch was long kept high upon Tolfalas’ steep rocky shores.  From this position a small force of men could repel any attempted invasion of the island and warn the kingdom of any approaching seaborn danger that threatened the mouth of the Anduin.

However, in the year 3019 TA, during the height of the War of the Ring, Tolfalas fell to the black ships of the Corsairs of Umbar.  Through sheer overwhelming numbers, the Corsairs overran the garrison, though they undoubtedly paid a high cost in life to the stalwart Gondorian defenders.  The time bought by the defenders of Tolfalas at least allowed a brief, hastily scrawled message to be sent from the island, and it read thus:

The fierce dark men of the South, the Haradwaith (Harwan Silharrows, Men of Sunharrowland, [and] Men of Harrowland) have come in many ships and fill the Bay of Belfalas, and [have] taken the isle of Tolfalas.

A grim message for grim times.  However, a wind from the west was coming, as was a king without a crown.  Tolfalas may have fallen, but the fate of the Corsairs and their black ships was no less doomed.

Heh, the MEM version of “First!”

Have you done the Sea of Rhun yet? I’d like to read about that. Also, what’s up with the inland sea/lake in Mordor? I bet the real estate prices there are quite affordable.

Apparently you did not read that one: https://www.isleyunruh.com/?p=3000

Heh, but yeah, I’d definitely like to do the Sea of Nurnen soon. I’ve been trying to focus on stuff that is off the path of the fellowship for the most part, so that fits.

What’s the MEM version of tl;dr?

Ah, I see your motive. Cirith Ungol then… is that right? I don’t know my LotR stuff so well anymore.

I think that’s what the other 50 comments you don’t see on here wrote.

That’s just the pass to Minas Morgul (aka, Shelob’s Lair). I might do Dol Guldor soon though.

I should also clarify that a large portion of this post is conjecture based on notes that Tolkien had written in the margins of some of his earlier drafts (as seen in The History of Middle Earth Volume’s VII and XII). So no, Tolkien does not actually mention “Tolfalas” in any of his official manuscripts.