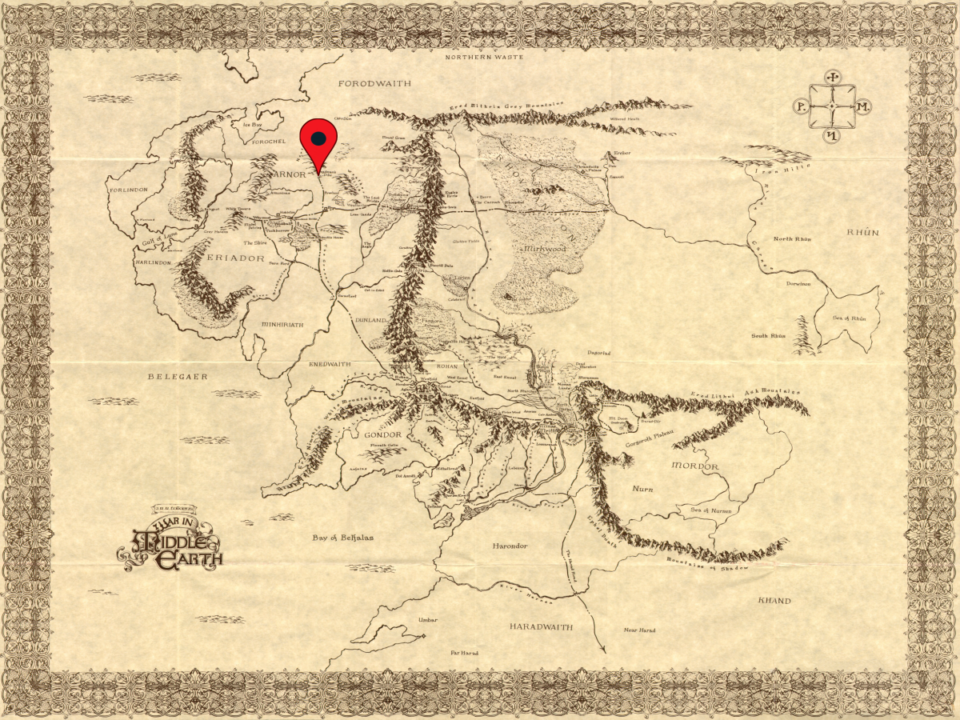 Welcome back to everyone’s favorite www.isleyunruh.com monday feature!  Middle-earth being the place of enchantment and wonder that it is, each month I will use my love of fictional cartography to transport you to another time and place.  So why not take a moment to fill you head full of knowledge that will have no bearing  at all on the real world?

This month I’ll be looking at the ruined city of Fornost Erain.

At the time of The Lord of the Rings, Fornost (known as Norbury to the Hobbits) was a crumbling ruin of ill reputation frequented only by the Dúnadain rangers.  As Elrond explained it at his council:

‘In the North after the war and the slaughter of the Gladden Fields the Men of Westernesse were diminished, and their city of Annúminas beside Lake Evendim fell into ruin; and the heirs of Valandil removed and dwelt at Fornost on the high North Downs, and that now too is desolate. Men call it Deadmen’s Dike, and they fear to tread there. For the folk of Arnor dwindled, and their foes devoured them, and their lordship passed, leaving only green mounds in the grassy hills.

The city of Fornost, Elvish for “north” (forn) “fortress” (ost), was built during the founding of the Northern realm of Arnor by Elendil at the end of the second age.  It was a little over a hundred miles North of Bree, and was the northernmost point of the great “Royal Road” that started at Minas Tirith to the far South.

Fornost was not always the abode of the Kings of Arnor, as mentioned above, this honor initially lay with the city of Annúminas some 100 miles to the West until the time of the death of Eärendur, tenth king of Arnor in 861 T.A.  Then, because of a dispute over the throne between Eärendur’s sons, the Northern realm was split into Arthedain (to the West), Cardolan (to the South) and Rhudaur (to the east).  Eärendur’s eldest son (and thus the true heir), Amlaith, ruled the Western realm of Arthedain and moved his king seat to Fornost.

Thus it was that for over a thousand years Fornost was the dwelling of the true heirs to Elendil in Arthedain.  During this time there were were many deeds great and bold, too many to list in one place, but I have taken the liberty to highlight a few (by year):

Thus, in the aftermath of the destruction of the North Kingdom, the once great city of Fornost was abandoned and slowly fell to ruin for the next thousand years.  Who knows what wonders might have still lain forgotten in its abandoned halls at the end of the Third Age.  If anyone knew what secrets and lore still lay within the crumbling ruins of Fornost Erain, it would have been Aragorn.  Of course he had more pressing matters to attend to as the Third Age drew to a close!

That’s it for Middle Earth Monday this month!  Join me the 4th Monday of next month as I take a look at The Withered Heath!

Thank goodness this finally posted! I thought I was going to DIE from all the waiting!

You and at least 5 other people who wrote letters to that effect!

By Aule, that was nerdy.

That’s what she said.

Nothing wrong with Aule…if you’re a dwarf.