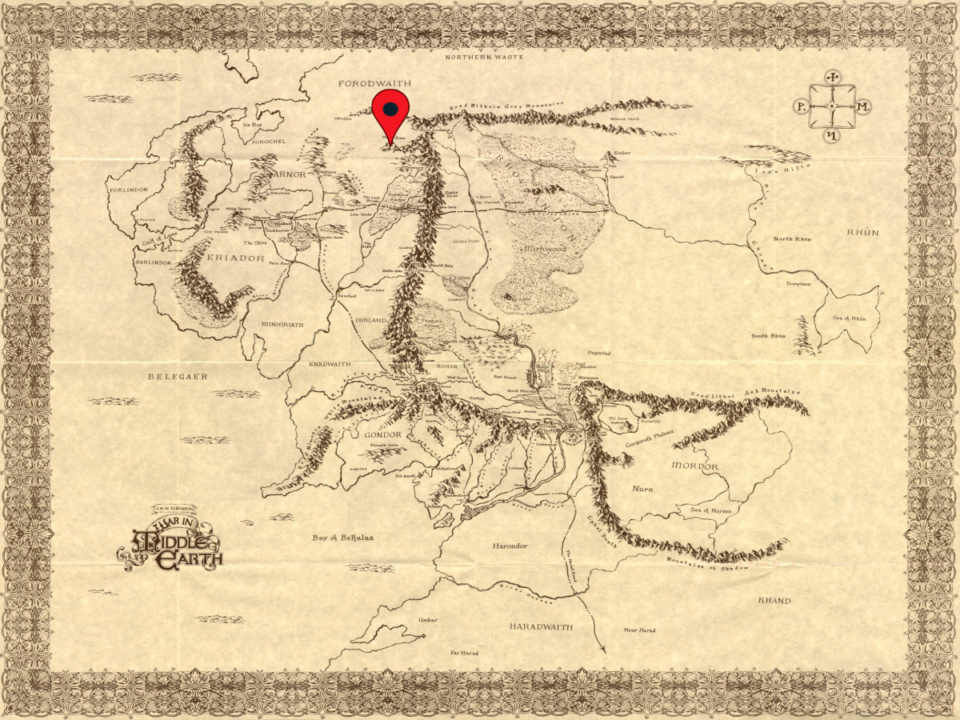 This month I discuss Mount Gram, one of the largest goblin warrens in the Ered Mithrim.

If you have ever seen a dragon in a pinch, you will realize that this was only poetical exaggeration applied to any hobbit, even to Old Took’s great-granduncle Bullroarer, who was so huge (for a hobbit) that he could ride a horse. He charged the ranks of the goblins of Mount Gram in the Battle of the Green Fields, and knocked their king Gol-firnbul’s head clean off with a wooden club. It sailed a hundred yards through the air and went down a rabbit hole, and in this way the battle was won and the game of Golf invented at the same moment.

While the exact location of Mount Gram was never given in any of the surviving histories of Middle Earth, I have used my best judgement to deduce its whereabouts in today’s post.  It is known that the orcs that attacked the Shire’s Northfarthing in TA 2747 came from Mount Gram.  In this battle (The Battle of the Green Fields as it came to be known), the hobbit Bandobras “Bullroarer” Took led the hobbits to victory from the back of his warhorse from which he personally slew the orc king Gol-firnbul.  It was (most likely apocryphally) reported that the orc kings head was knocked from his body by a single mighty swing of Bullroarer’s club, causing it to fly through the air and land in a rabbit hole.  Many hobbits claimed that this act was the origin of the game golf, though others suspect the tale was perhaps embellished through one too many retellings at the Green Dragon Inn.

As for the location of Mount Gram, if the orcs attacked into the Northfarthing then we must put the location of Mount Gram north of the origin of the river Hoarwell (obviously an army would find the crossing of the Ettenmoors problematic at best without using the East Road).  However, in the region there are only two peaks, the named peak of Mount Gundabad, and an unidentified peak on a western outcropping of the Misty Mountains.  It is here that Mount Gram must have been located, for it would have afforded the perfect staging ground for an invasion of Eriador.

Though the orcs were defeated in The Battle of Green Fields, the hobbits obviously did not pursue them to their mountain home and thus they were allowed to retreat and rebuild their numbers in the honeycombed caves of Mount Gram.  There they lurked without venturing forth throughout the War of the Ring.  For, while all orcs were thralls to the dark lord, the dark places of Middle Earth were many and scattered and Sauron’s northern minions that still dwelt in Mount Gram were forgotten.  Perhaps with their help (bolstered but what evils still lurked in Carn Dûm and Mount Gundabad) Rivendell itself could have been besieged.