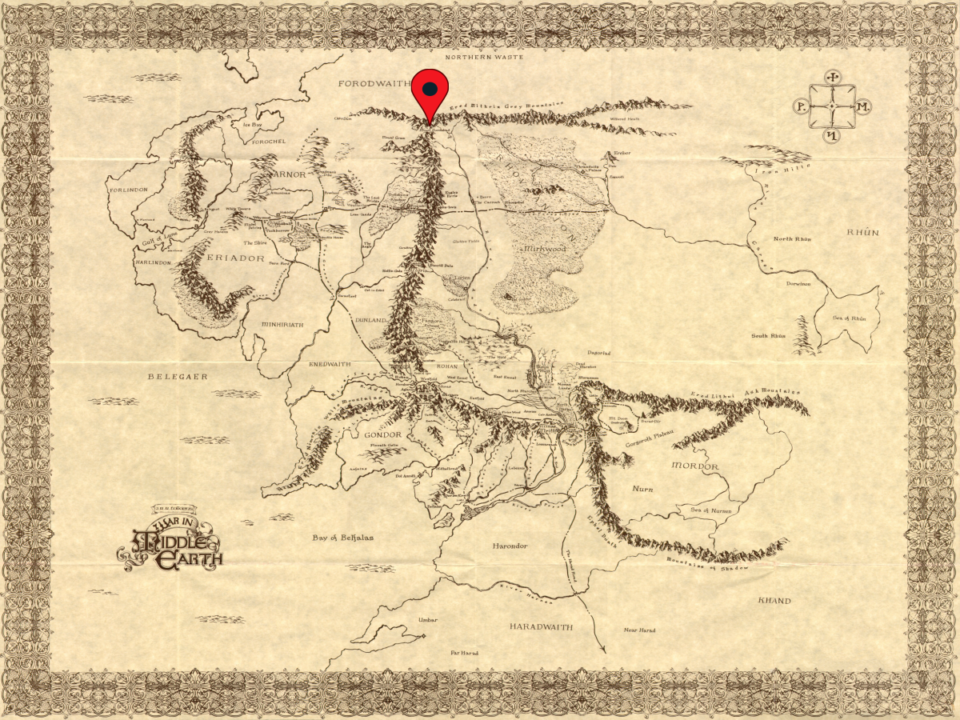 Tidings they had gathered in secret ways; and in all the mountains there was a forging and an arming. Then they marched and gathered by hill and valley, going ever by tunnel or under dark, until around and beneath the great mountain Gundabad of the North, where was their capital, a vast host was assembled ready to sweep down in time of storm unawares upon the South.

Long ago in the ages of darkness, before Arda knew the warmth of the sun, the Vala Aule gave life to the seven fathers of the dwarves.  However, when Ilúvatar, father of the Valar and creator of Eä, found Aule’s creations he forbade Aule from awakening the dwarves before the elves (which were to be the “firstborn”).  Thus, the dwarves slumbered in their halls of stone until after the elves awakened at Cuiviénen.  It was Durin the deathless, first created and oldest of all the dwarves who awakened first, and Mount Gundabad was the site of his awakening.

Though the world was quite different in that time before the sun, Mount Gundabad even then was a great solitary peak where the Ered Mithrun met the Misty Mountains.  Tall and cold it stood, and though Durin left it to found the deep halls of Khazad Dum, it remained a sacred place for the dwarves where they would often hold great gatherings and enclaves where delegates from the 7 scattered dwarf tribes would meet at the site of the awakening of their most honored member.

However, as the millinea passed and dark forces grew in the Ered Mirthrun, the dwarven influence in the region was diminished.  Finally, around 1700 S.A., The Witch King of Angmar destroying the elven realm of Eregion, which caused the dwarves to retreat inward to their cavernous city of Khazad-Dûm.  Because of the decreased dwarven presence in the north, Mount Gundabad eventually became a haven for dark forces.  Though it was retaken by the dwarves at the end of the War of Orcs and Dwarves in 2799 T.A., the dwarves were too weak to hold the mountain for more than a few centuries before it was reclaimed by the orcs of the Misty Mountains.

Thus, during the time of The Hobbit, Mount Gundabad was the capital of the northern orcs, and the site from which they launched their attack on the Lonely Mountain on the other side of Mirkwood.  It has often been speculated that had the orcs not been so soundly defeated in The Battle of Five Armies the north might have been unable to withstand the orcish threat from Mount Gundabad during The War of the Ring.

Which should serve as a lesson to all of us: never exhaust your army for the prequel.