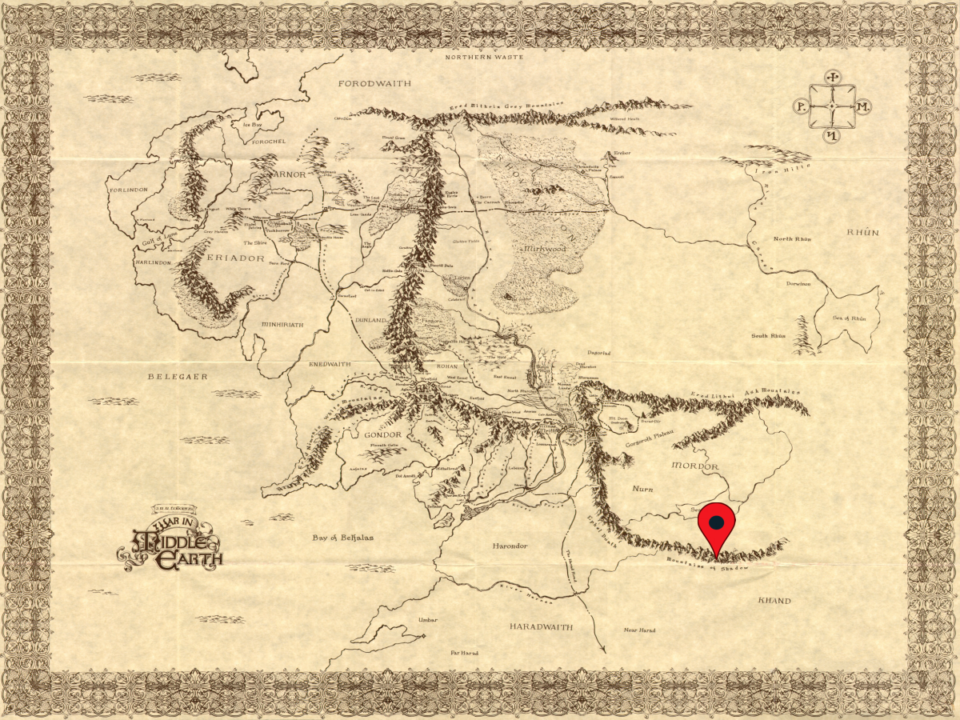 This month I discuss the little known fourth entrance into Mordor.

Gandalf put his hand on Pippin’s head. ‘There never was much hope,’ he answered. ‘Just a fool’s hope, as I have been told. And when I heard of Cirith Ungol–––’ He broke off and strode to the window as if his eyes could pierce the night in the East. ‘Cirith Ungol!’ he muttered. ‘Why that way, I wonder?’ He turned. ‘Just now, Pippin, my heart almost failed me, hearing that name. And yet in truth I believe that the news that Faramir brings has some hope in it. For it seems clear that our Enemy has opened his war at last and made the first move while Frodo was still free. So now for many days he will have his eye turned this way and that, away from his own land. And yet, Pippin, I feel from afar his haste and fear. He has begun sooner than he would. Something has happened to stir him.’

There are not many ways into the dreaded realm of Mordor.  The first, and most obvious, would be to simply knock on the Black Gate  that guarded the narrow gap where the Ered Lithui (Ash Mountains) met the Ephel Duath (Mountains of Shadow) to form the Cirith Gorgor (Haunted Pass).  Of course, that way would only be acceptable for someone with an invitation, a thing which the dark Lord gave out sparingly.  The second (and the way in which Frodo, Sam and Gollum entered Mordor in the book) was the Morgul pass.  Of course, being guarded by Minas Morgul in the West, and Cirith Ungol in the East (to say nothing of Shelob’s lair in the middle) made it such a fearful proposition that even Gandalf’s stout heart quailed at the suggestion.  The third way into Mordor was far to the East, where the Ephel Duath and Ered Lithui faded into the great plains of Khand.  A traveler entering Mordor through the 200 mile gap between the two ranges would be able to simply walk into Mordor.  Of course it would be almost 1000 miles to travel from the Morannon to Mount Doom by this route, and thus it would not be the fastest method for someone seeking entrance into the dark land of Mordor.

The fourth way into Mordor (and the subject of today’s post) was the little known Nargil (“torn cleft”) Pass.  It was located at the source of the river Nargil (the southernmost river that fed into the Sea of Nurnen) in the southeastern reaches of the Ephel Duath.  Its exact location was known only to the most trusted lietenants of Sauron, for it was only to be used as an emergency supply point or as a tactical means of sending a flanking force out to engage an enemy attempting to enter Mordor through Khand (all normal trade with Mordor and its allies in Harad and the east either went through the Black Gate or through the wide Eastern entry into Mordor).  The wild mountains that grew into the Ephel Duath proper along its southern arm hid the pass quite well from the sight of any who dared travel through the Desert of Lostladen beneath the shadow of the dark mountains.

Could the Fellowship have used the Nargil pass instead of the far more perilous Morgul pass?  Probably not.  It would have also been another 1000 mile trip (as the hobbit walks) to journey from the Morannon to Mount Doom by way of the Nargil pass, a journey that would have added almost 6 weeks to Frodo’s journey to destroy the ring (to say nothing of the perils of discovery during a trip across the slave fields of Nurn).  During that time Sauron would have crushed the free people’s armies in the Battle of the Morannon.  Consequently, Minas Tirith would have eventually fallen while the siege of men and dwarves in the Lonely Mountain would never have broken and Lorien and the Woodland Realm would have been attacked with renewed strength.  Thus, despite its many dangers, the Morgul pass seems to have been the Ringbearer’s best choice in his quest to save Middle earth from the destruction of the dark lord Sauron.

I know that for many, this post won’t quite match the excitement of “The Sea of Nurnen” entry, which sparked those legendarily heated debates so many months ago. Still, this one didn’t make me want to kill myself, so that’s a plus. Also, metal band names and the evil shit that inspires them are always winners in my book.

Yeah, anytime you get close to Mordor, the frequency of metal band names really goes through the roof.