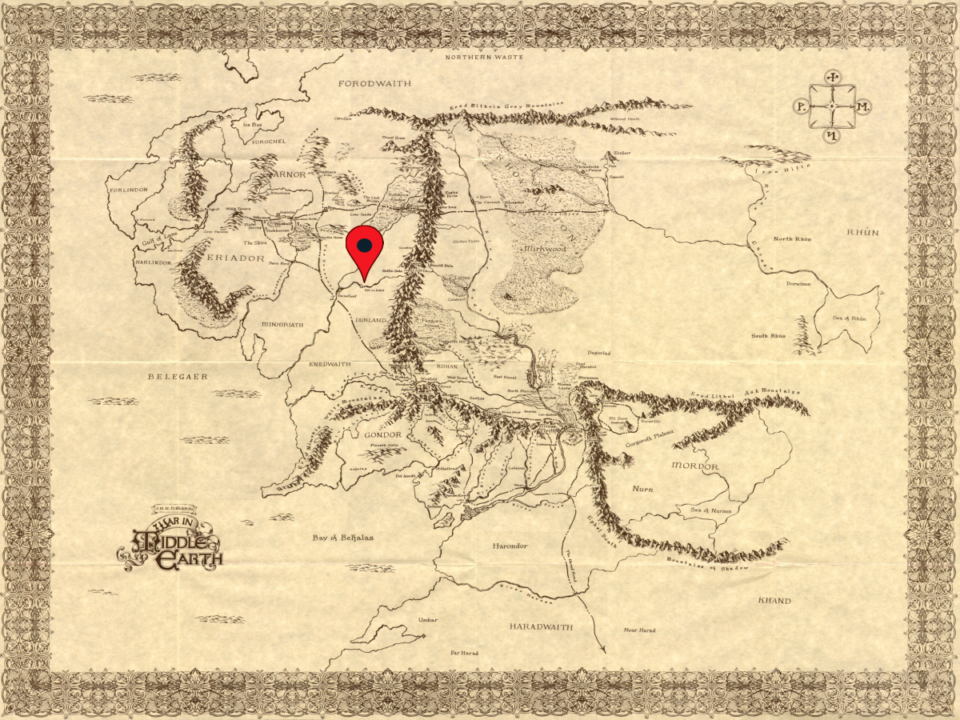 This month I’ll be discussing Ost-in-Edhil, the ruined city of the elven smiths of Eregion.

Gandalf stood at Frodo’s side and looked out under his hand. `We have done well,’ he said. `We have reached the borders of the country that Men call Hollin; many Elves lived here in happier days, when Eregion was its name. Five-and-forty leagues as the crow flies we have come, though many long miles further our feet have walked. The land and the weather will be milder now, but perhaps all the more dangerous.’

Ost-in Edhil (literally, “city of the elves”) was founded in the year 750 of the Second Age by the Gwaith-i-Mírdain (“people of the jewel-smiths”). It was the chief city of the new Elven realm of Eregion at the base of the Misty Mountains and was located at the confluence of the frost-cold rivers Sirannon and Glanduin. It was only 100 miles from the great dwarven city of Khazad-dûm (Hadhodrond as the elves knew it) and a peace was forged between the two contrary peoples which caused a great road to be built from Ost-in-Edhil to its doors. Though Eregion was initially ruled by Celeborn and Galadriel, Celebrimbor, “silver fist”, grandson of Feanor and greatest of all elven smiths, was its most important inhabitant and eventual ruler. For it was he who forged the rings of power from with the city’s white walls.

Having heard tales of the Mithril in the Misty Mountains, Celebrimbor had crossed the Ered Luin into Eriador with the Gwaith-i-Mírdain, enthralled by visions of the great works that might be wrought with the magical metal. Thus, for many years prosperity reigned and elvish smith-craft grew. However, in the year 1200, Sauron came to Ost-in-Edhil under the guise of a Valar called Annatar (gift giver).  Gil-Galad and Galadriel mistrusted him (perhaps the reason for her decision to leave Eregion around 1350), but he slowly and with infinite patience worked to gain the trust of the Gwaith-i-Mírdain over the next couple of centuries. Around the year 1500 he began to help Celebrimbor craft the rings of power.  However, perhaps with some subconscious suspicion of Annatar’s true form, Celebrimbor also crafted three rings for the elf lords without Annatar’s help.  They were called Narya, Vilya and Nenya and they were untouched by the dark lord’s taint (it has long been rumored that Durin III’s dwarven ring of earth was similarly taint-free though the other 6 dwarven rings were assuredly affected by an evil taint).  Well it was that Celebrimbor did so, for in 1600 Annatar returned to Mordor and crafted the one ring to rule them all from the darkest depths of Mordor in the fires of Orodruin.

The elves’ pure rings imediately revealed Annatar’s true purpose and they quickly removed them and withheld the rest of the rings of power from Annatar/Sauron. Unfortunately, in the year 1697, Sauron finally attacked Eregion and tortured the location of the 9 rings for mortal men doomed to die and the remaining 6 rings for the dwarf lords in their halls of stone from Celebrimbor. And though Sauron was eventually defeated and forced to flee to Mordor with the rings of power in his possession in 1701, Ost-in-Edhil was completely destroyed by his wrath.

So great was the destruction wrought by the dark lord that by the time of The Lord of the Rings almost 5000 years later, naught remained of the once great city but the dark green holly forest that gave the land its mannish name “Hollin”. Only the elves could still sense its presence, and thus I shall leave you with the words the stones spoke to Legolas as he walked the lands of his ancestors from long ago:

Deep they delved us,
Fair they wrought us,
High they builded us,
But they are gone.

Yay! Ost-in-Edhil! Oh, if I had known this was going to be the MEM I probably couldn’t have slept last night. Some serious shit went down there. I like to think that if Celebrimbor hadn’t been in love with Galadriel, he would have used better judgment.

I actually didn’t get around to rereading ALL of the pertinent sections from the Silmarillion and Unfinished Tales this time around and painted some of the elf stuff in broad strokes. I realized I was doing more research for middle earth monday than I was for grad school…which is probably frowned on… 😉

Yeah, well, elves are complicated. I mean, you’ve got to cover 10,000 years of history, so if you know the LotR and not the Silmarillion, that is like asking a WWII historian about the Babylonians. Celebrimbor is an interesting character though. He spoke against his own father in Nargothrond and didn’t get tied up in that Silmaril nonsense.

Maybe you can answer this one…I couldn’t find it in the primary sources. Who officially ruled Ost-in-Edhil prior to Celebrimbor in 1350? It seems Galadrial showed up after its 750 founding…was it another Celeborn Galadriel tag team? Just Celeborn? Just Galadriel? The early rulership and the terms of Galadriel and Celeborn leaving were unclear.

You know what? This week’s MEM was actually pretty damn cool. Shit gets real when we start talking about dark lords and rings.

Wait, I don’t think I did that right…

You know, I don’t really know. I’m not sure if Tolkien sketched out the Second Age that fully, especially where the elves were concerned. One of the History of Middle Earth books may say, but if the Tolkien Gateway doesn’t cite it, Tolkien may never have expanded on Ost-in-Edhil. It is clear if Celebrimbor stayed with Gil-galad, or went to O-i-E early, though I suspect the latter as he wanted to be in Galadriel’s company, and Gil-Galad didn’t trust Annatar, so that would also have estranged them.