Middle-earth Monday 19: The Sea of Nurnen 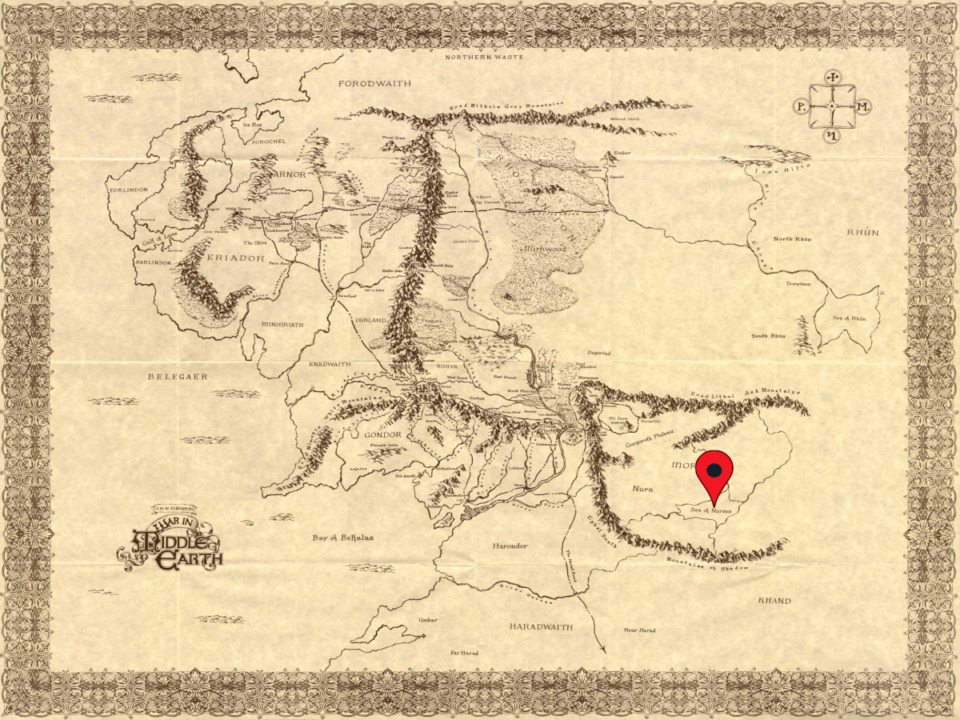 This month I’ll finally settle the salinity issue of the “bitter” “sea” of Nurnen.

Neither he nor Frodo knew anything of the great slave-worked fields away south in this wide realm, beyond the fumes of the Mountain by the dark sad waters of Lake Núrnen; nor of the great roads that ran away east and south to tributary lands, from which the soldiers of the Tower brought long wagon-trains of goods and booty and fresh slaves.

While Mordor was a cruel land of rock, ash and fire, its lands were not completely without vegetation.  South of Gorgoroth and the wasted ash covered plain of Lithlad was the land of Nurn and there the land was still fertile.  Protected by the confines of  the southern arm of the Ephel Dúath (roughly translated as “fence of shadow,” though, the fabled Nargil Pass broke the “fence” somewhere in this southern arm of the Ash Mountains) the land of Nurn was a vast flat area, larger than the mountain bounded plateau of Gorgoroth and the plain of Lithlad combined.

Centrally located in the region was the “Sea” of Nurnen, an inland lake over 10,000 square miles in area.  All around the lake were vast fields of grain worked by the slaves of Sauron year-round in the warm climate of Southern Mordor.  The high mountains that surrounded Mordor kept most precipitation out and thus most of the crops were watered by an extensive irrigation network that spread throughout the land.  Whether this water came from the four unnamed rivers that supplied the Sea of Nurnen, or from the sea itself is the subject of some debate.

As an endorheic body of water (that is, a body of water without a natural outlet to the sea), The Sea of Nurnen’s only option for watershed was evaporation or seepage into the ground.  And, as with most endorheic bodies of water, it has long been assumed that the Sea of Nurnen was a salt lake.  While this is probably true to some extent, the issue is actually quite complex. Today I will attempt to use my very basic understanding of fictional hydrology to clear things up as to the Sea of Nurnen’s salinity.

First, as a remnant of the great inland salt sea Helcar (formed in the destruction of the Northern Lamp Illuin) one could claim a relatively high salinity level in the Sea of Nurnen.  However, after millennia of being supplied by the freshwater streams that flowed out of the surrounding mountains into it, I would guess that the quality of water of its original source should have little impact.

Of course, unless there was significant ground seepage, the freshwater streams that supply the lake would not have been enough to conteract the effects of evaporation (which leaves behind minerals and salts in all endorheic lakes that affect their salinity).

However, not every endorheic lake will have the hypersalinic water of a lake like the present day earth’s Dead Sea.  Indeed, many fall within the “brackish water” range (0.5-30 salt parts per thousand).  For example, Lake Van in Turkey (close to the assumed present day location of Mordor) maintains a relatively low salinity level for an endorheic body of water, though its high ph (9.7-9.8) make it strongly alkaline and thus quiet bitter to the taste (which makes it an appropriate parallel for the waters of the Nurnen, which have so often been called “bitter,” but never “salty”).

Even the once Sea of Rhûn sized Aral Sea in the former Soviet Union (the present day location of the endless grasslands of Rhûn) had even kept its waters at acceptable levels of salinity for human consumption due to the supply of its inflow rivers Amu Darya and Syr Darya.

Perhaps the most Nurnen like example in our present day earth can be found by examining Lake Turkana in Kenya (present day location of Far Harad).  It is only a quarter of the size of the Sea of Nurnen, but it has roughly the same amount of inflow streams and even has an active volcano as a central island!  It is also in a hot desert environment which would speed evaporation (and thus salt concentration) even more than in Mordor.  And yet the water of Lake Turkana amazingly remains potable for livestock and even humans to some extent.

Bottom line, all endorheic lakes will be more salinic than lakes with an outflow pathway to the sea.  Yet this salinity level will be affected by many factors, from the evaporation rate of the environment, the amount and chemical composition of the waters that supply it, even the interactions of the minerals deposited by evaporation which can sometimes cause the salt to deionize and deposit along the bottom of the lake.

Thus, while I do not think that it would be wrong to say that the Sea of Nurnen (or even the Sea of Rhûn) is a salt lake, the level of its salinity can not be determined to the degree with which its waters could accurately be described as “salty” rather than just “bitter” as their high level of alkalinity would attest.  Thus, after the War of the Ring, the lands that King Elessar Telcontar gave the thralls of Mordor as their own did not actually contain a poison lake. Only a partly poisoned lake!

I’m mostly posting a comment to say that I read this. And it was *not* worth it. And I can’t imagine how long it took you to write this. You nerd.

Also, I can’t believe you read all that.

Everything followed relatively correctly. Although I’m not sure if a body of water that has ground seepage into an aquifer (or elsewhere)can really be considered endorheic. To reiterate, it is indeed the quality of the water that flows into the lake (and therefore the type of land/rock the water flows through to get to the lake) that would indeed determine the composition/salinity/alkalinity/potability of the waters.

Hmm, good points. And since the streams that flow into the Sea of Nurn flow through blasted volcanic ash plains, I’d imagine they were fairly high in concentrated volcanic chemicals.

Also, I was unable to find a present day example of an endorheic lake whose lake bed was permeable enough to conteract evaporation, so maybe that isn’t really a possibility.

Severe necro-comment here, but thank you. This helped pour water on a (terrible) theory about magical desalination stations in the 4th age. Thanks for looking up those parallels in our world!

Ummmm, the hyperlink for ‘Nargil Pass’ links to a WWE video on YouTube: “Fenix almost breaks his Neck” 😆

I don’t even know what AEW is. I thought WWE had the monopoly on such things?
Nb. I’m not American so these things are pretty alien for me.

P.s. I’d leave the link as it is. It’s a nice little surprise for future readers 😝

AEW is the new (as of last year) plucky underdog company with progressive policies that has actually established a beachhead against WWE’s monopoly (the first to do so in a long time). As such they’ve got a ton of fan goodwill since WWE has been on a real tear with fan-alienating policies (from being in bed wtih the Saudi’s to treating their “independent contractors” like shit, to their nonsensical storylines) in recent (and past) years. It’s all just fake wrestling though, so unless that’s in your particular wheelhouse, AEW isn’t going to win over many non-fans 🙂

I have heard about WWE getting in bed with the Saudi’s, and it’s negative response, but I also now feel fully apprised of the situation in general.
Thanks!