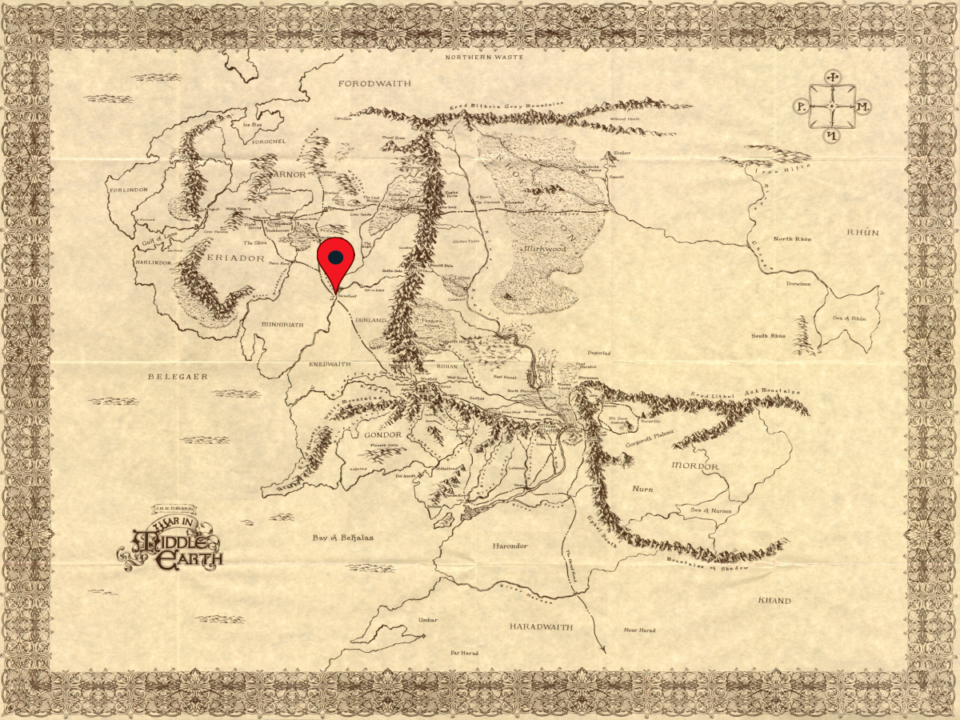 This month I discuss the ruined city of Tharbad.

The hobbits had been nearly two months in the House of Elrond, and November had gone by with the last shreds of autumn, and December was passing, when the scouts began to return. Some had gone north beyond the springs of the Hoarwell into the Ettenmoors; and others had gone west, and with the help of Aragorn and the Rangers had searched the lands far down the Greyflood, as far as Tharbad, where the old North Road crossed the river by a ruined town.

Though but a ruined town by the end of the third age, at one point Tharbad had been a thriving city.  Founded around the year 500 of the second age, Tharbad was originally a river port for the Númenórean lumber industry before being shipped off at the southern port of Lond Daer.  It was located on the river Gwathló (Greyflood) just below the marshy fens (known as the Swanfleet) that marked the confluence of the Glanduin and the Gwathló.  At the time of its founding by Númenórean explorers (the first to travel to the site of Tharbad was the famous Tar-Aldarion the Mariner) the waters of the river Gwathló were shrouded in shadow by the great trees on either side of the river (trees that would soon be decimated in the deforestation that the Númenórean lust for timber would bring) and thus the river was originally called the Gwathir (River of Shadow).  However, upon coming to the fenlands that the elves called Nin-in-Eilph, (the Waterlands of the Swans), Tar-Aldarion mistakenly took the marshes for the source of the River which gave it its present name “Gwathló” (shadowy river from the fens), or, as it was more commonly known at the end of the third age, the Greyflood.  In Adûnaic (the language of the Númenóreans) its name was the Agathurush.

By whatever name one wishes to call it, the Gwathló is of extreme importance to the rise and fall of Tharbad.  Though it started as a small river port, its central location in the Númenórean lumber industry caused Tharbad to quickly grow in both size and importance.  Great earthworks were raised on either side of the river to deepen the naturally shallow waters about Tharbad for seagoing vessels while a mighty fortress was raised upon its banks to protect the city.  Across the river the famed Bridge of Tharbad was raised to insure the trade along the great North-South road.

However, during the War of the Elves and Sauron Tharbad was overrun by Sauron’s minions.  And in the year 1700 Tharbad was the site of the Battle of the Gwathló, the decisive defeat of Sauron’s armies.

After the region surrounding Tharbad was finally reduced to a barren plain through deforestation, Tharbad eventually began to dwindle from the height of its prominence in the second age.  The Great Plague of 1636 (third age) dealt a serious blow to the once great city, but it was the aftermath of the Fell Winter of 2911, when the feral white wolves of the North crossed the Brandywine and brought their frozen terror with them that Tharbad finally fell.  For, in the spring that broke the frozen suffering of the terrible winter, the city was completely destroyed by the flooding of the snow swollen Gwathló.

Thus, by the time of the War of the Ring, Tharbad was known only as the point of a dangerously erratic fording of the Greyflood.  The ruined town that sat in crumbling decay beside the river gave little evidence of the importance it once held in the region.  Only the massive broken supports of the Bridge of Tharbad that jutted from the once again shallow waters of the river hinted at the magnificence the city had held.