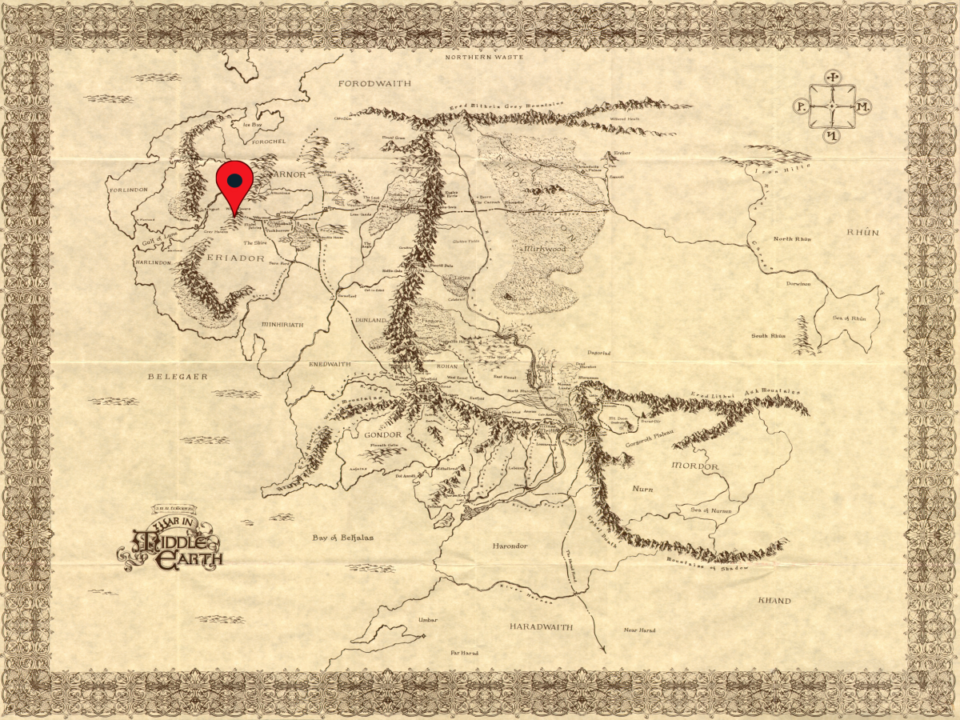 This month I take a look at the white Noldorin towers on the edge of the Shire.

Then he heard a noise in the distance. At first he thought it was a great wind coming over the leaves of the forest. Then he knew that it was not leaves, but the sound of the Sea far-off; a sound he had never heard in waking life, though it had often troubled his dreams. Suddenly he found he was out in the open. There were no trees after all. He was on a dark heath, and there was a strange salt smell in the air. Looking up he saw before him a tall white tower, standing alone on a high ridge. A great desire came over him to climb the tower and see the Sea. He started to struggle up the ridge towards the tower: but suddenly a light came in the sky, and there was a noise of thunder.

The Tower Hills (Emyn Beraid) were a series of low lying hills about a hundred miles due West of Hobbiton.  Because of their proximity to the Blue Mountains, they were most likely folded rock rather than eroded sedimentary hill formations.  In any case, they must have been fairly steep (due to the fact that, in the section from Frodo’s dream at Crickhollow that I quoted above, he had to struggle up the ridge to reach the base of one of the towers ) in many places.  It was on these hills that the men of Númenor and Eriador first met and forged a friendship in the year 600 of the second age.

The hills covered about 40 miles by 70 miles in area and in the middle of their Northern section were three ancient white towers spaced 5 miles apart in a triangle.  The towers were built by the Noldorian elf Gil-Galad for his friend Elendil.  They were constructed around 3320 of the Second Age, and were the last Noldorin structures to be built upon Middle Earth.

The tallest of the three (the tower visible at the top of the ridge in Frodo’s dream) was called Elostirion (in elvish, roughly, the fortified star watch tower–which suggested it may have had a defensive wall about it), and it held the Elendil Stone, the last of the palantíri of the north.  The Hobbits said that one could see the sea (or at least the Gulf of Lune) some 50 miles away from the top of Elostirion, though no Hobbit had ever been there.  For, even during the time of the War of the Ring, the elves occupied the white towers and guarded the Elendil Stone closely.  It was said that the palantir was tuned to a matching stone in Tol Eressëa, Isle of Valinor in the lost West.  It is known that Gildor Inglorion spent a great deal of time with the Elendil stone, perhaps he was in contact with the Undying Lands through the palantir of Elostirion.  It also seems plausible that the elves would have shared with their friend Elendil news of the fate of Ar-Pharazôn, last king of Númenor, after his fateful attack on Valinor.  How else could Elendil have received the information he chronicled in the Akallabêth (the story of the destruction of Númenor)?

It was not until after The War of the Ring in the year 3021 of the third age that Elrond took the Elendil stone out of the white tower and back to the Undying Lands.  The tower hills were not deserted however.  On their Eastern slopes grew the settlement of the Undertowers, capital of the lands between the Tower Hills and the Far Downs (which came to be known as The Westmarch) which were gifted to the hobbits by King Elessar in the year 30 of the IVth age (1452 Shire Reckoning).  Elanor, daughter of Samwise Gamgee, dwelt at the Undertowers with her husband Fastred (Warden of the Westmarch), and so too did many future generations of their family.

Which leads to the most important facet of the Tower Hills: the fact that they held the Red Book of Westmarch, the tome, written by Samwise Gamgee, that held all the history collected during his travels upon middle earth.  And so the Red Book and the information within it was passed, from generation to generation of the hobbits of the Undertowers of the Tower Hills, until the passing years became a blur and even the great white tower of Elostirion crumbled.  Yet the Red Book survived to this day and came to us as a story known as The Lord of the Rings.