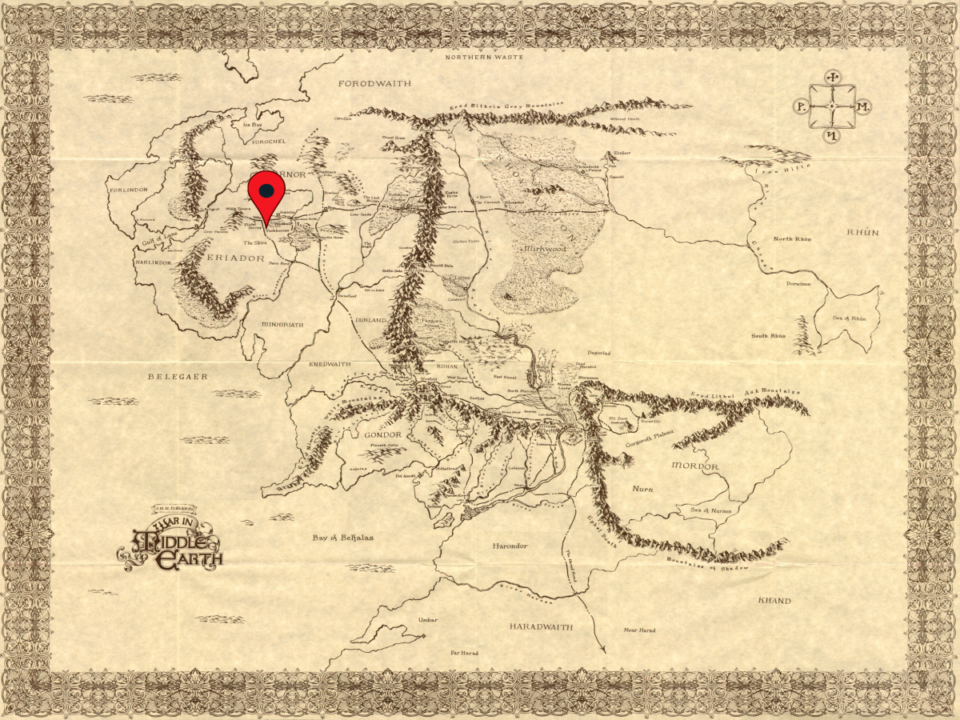 This month I discuss one of the oldest villages in the Shire:

‘Yes, it is all very dim, and stuffy, in here,’ said Pippin. ‘It reminds me, somehow, of the old room in the Great Place of the Tooks away back in the Smials at Tuckborough: a huge place, where the furniture has never been moved or changed for generations. They say the Old Took lived in it year after year, while he and the room got older and shabbier together-and it has never changed since he died, a century ago. And Old Gerontius was my great-great-grandfather: that puts it back a bit. But that is nothing to the old feeling of this wood. Look at all those weeping, trailing, beards and whiskers of lichen! And most of the trees seem to be half covered with ragged dry leaves that have never fallen. Untidy. I can’t imagine what spring would look like here, if it ever comes; still less a spring-cleaning.’

Located in the Westfarthing some five leagues south of Hobbiton and two leagues east of Tookbank, Tuckborough was situated right in the midst of the western slopes of Green Hill Country.  Tuckborough was an old village (by Shire standards).  Despite being located over 15 league from the Brandywine, its founding dates back at least to the year 2100 T.A. (500 Shire Reckoning) and probably a fair bit earlier.

Though not as large as Michel Delving to the west, it was still a sizable town, with the many of its structures built above ground (much like Hobbiton to the north) despite the hilly country within which the borough was tucked away.  Within these buildings lived a stout folk, learned of both bow and axe.   Five score of these Tooklanders played a vital role in scouring the Shire of Saruman’s corruption in the aftermath of The War of the Ring.

The largest dwelling in Tuckborough was the Great Smials, a massive complex of tunnels and above ground structures that housed the majority of the Took clan within its musty halls. Within the Great Smials was located the most extensive library in the Shire.  In addition to housing many ancient volumes of Shire history (including the Yellowbook, a chronicle of Tuckborough itself), in the years following the War of the Ring Peregrin and his successors collected many texts on the history of Gondor and the South.  Nowhere else in the Shire might a young hobbit be able to read of the sunken land of Númenor or the treachery of Sauron.  And such was the case for long years after the departure of the last elf for the undying lands.