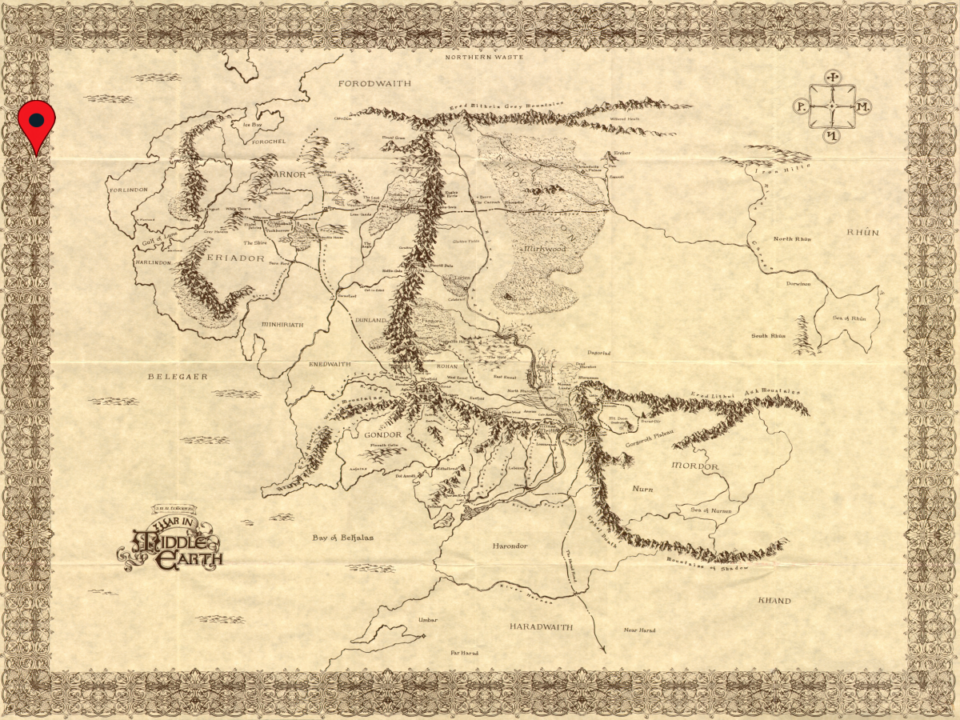 This month I’ll be discuss The Western Isles (Himling, Tol Fuin and Tol Morwen), the last remnants of the land of Beleriand.

Thus an end was made of the power of Angband in the North, and’ the evil realm was brought to naught; and out of the deep prisons a multitude of slaves came forth beyond all hope into the light of day, and they looked upon a world that was changed. For so great was the fury of those adversaries that the northern regions of the western world were rent asunder, and the sea roared in through many chasms, and there was confusion and great noise; and rivers perished or found new paths, and the valleys were upheaved and the hills trod down; and Sirion was no more.

While this monthly feature is called “Middle-earth Monday”, not “Beleriand Monday”, I thought I’d go ahead and talk about the parts  of Beleriand that survived the destruction of that opening quote to become part of the Middle-earth of the Third Age.

First, a quick note on the drowning of Beleriand.  Beleriand, as we all know, was the land West of the Ered Luin (Blue Mountains) where many of the events of the Silmarillion during the First Age took place.  However, when the Valar finally came to Beleriand in all their divine fury and destroyed the fell throne of Morgoth, the lands were destroyed as well.  I am not aware of any specific maps of the Middle Earth of the Second Age, but I often wonder if the complete ruin of Beleriand wasn’t fully achieved until the downfall of Numenor at the end of the Second Age (especially based on how that opening quote is worded).  Still, that is theory that will have to be explored another time!  For now, all that matters is that during the Third Age there were only three known islands that remained (along with Lindon of course) of the once great land mass.

The chief citadel of Maedhros was upon the Hill of Himring, the Ever-cold; and that was wide-shouldered, bare of trees, and flat upon its summit, surrounded by many lesser hills.

The tiny island of Himling was located about 150 miles West of the Blue mountains (and only about 50 miles from the coast of Lindon).  It is the first dashed circle to the West of the Blue Mountains on the Middle Earth Monday picture this week.  While there is no mention of the isle of Himling in any of Tolkien’s published text, it does still show up on many of the published maps of Middle Earth and thus must be considered cannon (even though some maps omit its presence).  Based on its location it must be what is left of the Hill of Himring (though there is no explanation of the name change to Himling).  Thus, it was undoubtedly a small island (probably smaller than its size on most of the published maps would suggest), bare except for the ruins of the once great citadel of Maedhros.

Then Morgoth pursued [Barahir’s] people to the death, until few remained; and all the forest of the northward slopes of that land was turned little by little into a region of such dread and dark enchantment that even the Orcs would not enter it unless need drove them, and it was called Deldúwath, and Taur-nu-Fuin, The Forest under Nightshade. The trees that grew there after the burning were black and grim, and their roots were tangled, groping in the dark like claws; and those who strayed among them became lost and blind, and were strangled or pursued to madness by phantoms of terror.

Tol Fuin (The Island of Night), all that remained of the forested highlands of Dorthonian, was a large island (almost a hundred miles in length) to the West (and slightly North) of Himling (the large dashed circle on the Middle Earth Monday picture this week).  As the quoted text from the Silmarillion suggests, Tol Fuin was in all likelihood still a dark haunted place since the dark enchantments of Morgoth were not easily or quickly gotten rid of.

Tol Fuin is perhaps the Western Island whose existence is most in doubt.  Tolkien only ever made one map that showed its existence (found in the First Map chapter of Volume VII of the History of Middle Earth–which you can see HERE), all subsequent maps omitted it (though many still showed the isle of Himling).  Still, its existence must still be considered because of its inclusion on this early map (even though the map does differ from the final maps in many details, most notably the exclusion of Lake Evendim).  Perhaps no seafarer had ever returned after landing on the dark shores of Tol Fuin and thus its existence was one of the many mysteries lost to the years by the time of the Third Age.

It is told that a seer and harp-player of Brethil named Glirhuin made a song, saying that the Stone of the Hapless should not be defiled by Morgoth nor ever thrown down, not though the sea should drown all the land; as after indeed befell, and still Tol Morwen stands alone in the water beyond the new coasts that were made in the days of the wrath of the Valar.

Tol Morwen is the only of the Western Isles specifically mentioned in the published texts, and thus its existence can not be doubted (though it has never appeared on one of Tolkien’s maps (published or unpublished).  Tol Morwen has a sorrowful history.  It was once the top of the the great gorge Cabed-en-Aras upon the River Taeglin (located just north of the tributary Celebros).  It was here that Túrin Turambar slew the dragon Glaurung in 499 F.A., who, with his dying words undid the spell that kept Níniel from realizing that her husband Túrin was also her brother.  After she threw herself into the gorge in shame, the grief striken Túrin fell upon his sword in the same spot.  A grave was made there, upon which the elves set a great stone with the words: TÚRIN TURAMBAR DAGNIR GLAURUNG NIENOR NÍNIEL (“Turin, Master of Doom, Glaurung’s Bane. / Nienor Níniel.)

Two years later their mother Morwen came to the stone and learned of the death of her children.  In her sorrow she made the grave site her final resting place as well, and thus the words “Here also lies Morwen Eledhwen” were added to the stone.

Contrary to the claims of many fictional cartographers, its location is not unknown.  The gorge of Cabed-en-Aras can easily be found on many maps of Beleriand.  Then it is a simple matter of overlaying such a map with a map of Middle Earth in the Third Age (with Himling/Himring as the common point of reference) to find the location of Tol Morwen.  This is what I have done to find the location of the West-most dashed circle on today’s picture for Middle Earth Monday.

There you have it, of the once great land of Beleriand, only three islands remained at the end of the Third Age.  Though they appear on few (if any) maps, I do not doubt their presence in the cold waters of the Northern Belegaer.  Who knows what other islands might have still remained of Beleriand.  Perhaps some remnants of Echoriath, the Encircling Mountains about Gondolin.  Or maybe even some part of the mighty Thangorodrim rises out of the deeps, still spewing its poisonous fumes into the sky.  If such an island were to still exist, surely any hapless traveler that might encounter it would fare no better than one who had landed upon the fell shores of Tol Fuin.

The aquatic ruins of Thangorodrim haunted the minds of men even into the latter days whence came the legends of Cthulhu, the last of the mighty Balrogs, and his city of horrors, R’yleh.

Normally, Amy, I’d ask that you not encourage him. But on the other hand, you said “Cthulhu.” \m/

Actually, I sorta love MEM… but anytime I can tie together two of my obsessions, in this case Middle Earth and the Cthulhu Mythos, happy me!

Also, you can’t tell me that Cthulhu isn’t just a squiddily balrog. You’ve got the large size, good muscle tone, wingy-dings (yes, I know the debate)… maybe not all the balrogs were fiery overlords… maybe some of them had it in for the dolphins. Dolphins are sorta like elves… think they’re better than everyone else….

lol @ dolphins thinking they’re better than everyone else.

This quote: “…out of the deep prisons a multitude of slaves came forth beyond all hope into the light of day, and they looked upon a world that was changed.” always made me wonder if maybe those ruins of Thangorodrim weren’t so aquatic…

Well, obviously. They became aquatic after Beleriand itself was destroyed. I thought there was a gap between the War of Wrath and the exodus of Free People into the east. Also, as you mentioned, it could have been sunk after the world was bent. At any rate, it is clearly aquatic now, and that’s where Cthulhu lives.

What about Watcher in the Water? ;)This mysterious creature is more ,,cthulhish” than you can imagine, all those tentacles brrr.;)