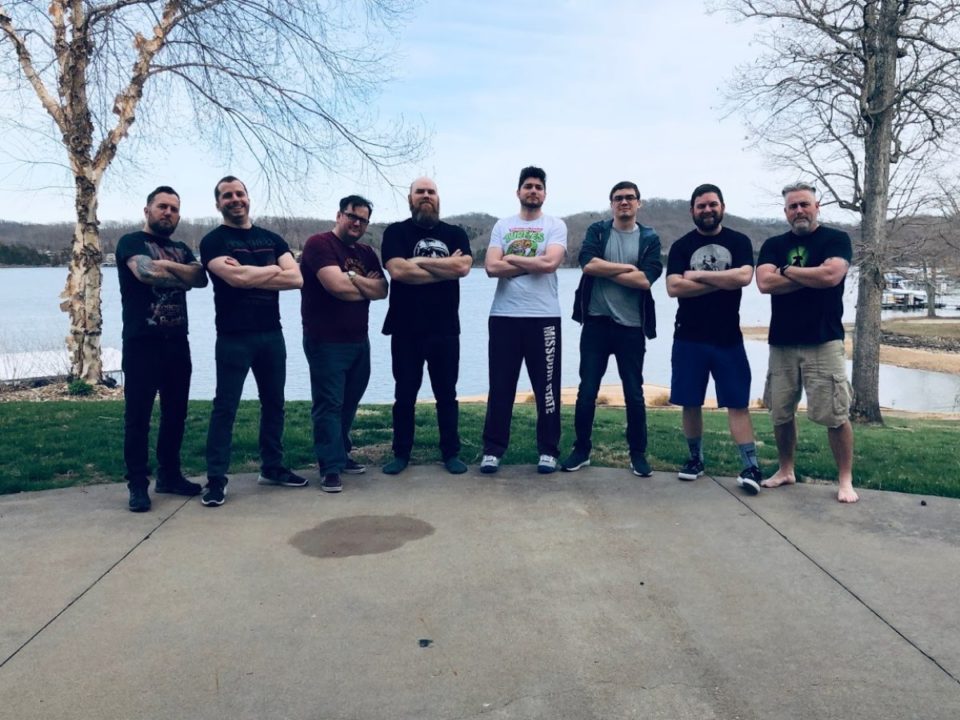 Each Spring, for a while now, I have gotten together with a group of friends at the Lake of the Ozarks…and proceeded to spend the entire weekend indoors in a flatulent-green hazed cloud of sleep-deprived board gaming. This year we stayed at a new, ridiculously huge, airbnb that was right on the water…but we still didn’t quite make it “outside” in any meaningful way.

It does seem like we play fewer and fewer games each year, though a ridiculously huge bar, a lot of online Jackbox gaming, and playing a couple 6 hour games also cut into the my overall plays. Still, I am once again here to talk about what we did play, along with my thoughts on each game.

As usual, I’ve rated the games with the following scale from www.boardgamegeek.com:

With that in mind, here’s what I thought about the games played at this year’s Indoor Survival Summit:

Boufbowl (9) – As a Krosmaster: Arena super-fan, obviously this one was going to be right up my alley–even if I’m not exactly a soccer super-fan. This is basically just a simplified version of Bloodbowl, spiffed up with super cute (and fantastic looking) chibi minis. On your turn you can do three moves and one action (pass/tackle)–a sequence each player repeats until someone scores. The blocking rules are simple but thematic (basically, if you are in the same area as another team member, you can’t move forward until you get a blocker), and everything feels quite evocative. If I have a complaint (aside from Ankama’s usual horrible rulebook), it is that the game can sometimes bog down in a drawn out tackle/stand up/repeat cycle. However, the full game with special power cards doesn’t add much complexity, and helps keep things moving by making powerful stalemate breaking combo plays more likely. Highly recommended.

Citadels (8.5) – This new version of Citadels looks fantastic and even has a few minor rule cleanups that all seemed to be improvements–making it a welcome release of an older game that holds up quite well. Gameplay has some decent bluffing “They know I’m going to take this, so should I take this instead?”, scales very well (and plays very differently) from 2-7, and is nice and short as you all pick roles, trying to get the most cards and gold in order to build 8 buildings before anyone else. A game that will not only stay in my collection, it will also get upgraded to the new, fancy version ASAP.

Condottiere (7.5) – There is a good push your luck/strike while the time is right game here as you go around the table playing cards from your hand, hoping to stay in the lead numerically, but not over-commit (as the other players can usually fuck you over if you do). The artwork is great, and it doesn’t overstay its welcome, but part of it feels like maybe a few too many moving parts hiding the fact that the game is built around the simple decision of “do they have a card in their hand that will fuck me? …or not?”

Just One (7.5) – Decent party game where one person gets a random word (that they can’t see), and the rest of the table writes words that are not that word to get them to guess that word. If two people write the same hint word, they have to turn them face down. There’s not much to it (and most of the rounds were pretty easy to guess), but it was still fun enough.

Memoir ’44 (9) – This early Command and Colours game is still maybe the best version of the system. The emphasis on range helps keep things from bogging down in melee slugfests while the system is nice and lean (chromey magic/etc. rules are not missed). I don’t know that it actually feels like a WAR game (WWII or otherwise) to me, but it’s definitely fun!

Nuttsy Tennis (8) – This old game with trigger paddles and a wire mounted tennis ball actually works very well as a fun 2-player diversion. It’s surprisingly tricky to get a good volley going, but not so much that you can’t get a few good back and forths going before someone fucks up. Definitely worth picking up if you come across this at a Goodwill.

Outdoor Survival (6) – I don’t know how to accurately rate this one, the game (or, at least, the scenario that our group always plays) is a ridiculously random exercise in wandering around at the mercy of bad dice rolls until you die of thirst and starvation in the wilderness. On the other hand, it’s pretty damn evocative, and one of the games I always look forward to playing, so, it must be doing something right–even if I never usually make it very far from the starting cabin.

Push (7) – There is a good push your luck mechanic at play here (you keep drawing cards and putting them in 3 piles, but if you have to put the same number or color in a pile, you bust), but the game as a whole felt a little unfinished for lack of a better word. Banking cards especially seemed to not quite work (or, at least, be worth it) in games with a large number of players–on the other hand, I only played it once, so maybe that’s just sour grapes from me banking cards when I shouldn’t have.

Runebound – 2nd Edition (6) – This does a lot of cool stuff, but at the end of the day it’s just way too fucking long. To make matters worse, the final battle is so punishing that if you try and fail, it can be difficult to remain in the game…and if all players try and fail, they usually just want to give up and stop playing rather than build up and try again. Again, there are some nice thematic things at play here (though most encounters end up getting skimmed over to say “ok, forget the flavor, what do I have to roll?” in order to cut down on time), but I don’t see myself getting too excited to play again without a ton of house rules.

Villainous (5.5) – This looks fantastic, and the mechanics are sound, but I had two big issues with it. First, to play well, you really have to know exactly what your opponents need to do to win, and often what they have to do is really fucking complicated. Then, in addition to constantly scanning the complicated, evolving board positions of your opponents, your only real way to stop them is to draw cards and hope you get a “take that” card that will screw them. I won as Ursula because no one was able to draw my Ariel card to stop me (and because I happened to get a few win condition cards in my opening hand)–all of which is to say that it wasn’t the most satisfying game experience I’d ever had.

Warhammer Underworlds (9) – This game is pretty dicey (probably exacerbated by the fact that you only have 12 activations to do anything before the game is over), but that can definitely be offset by clever positioning (and pre-game deck building, if you are into that kind of thing). Randomness complaints aside, it’s a real blast to play, looks amazing (if you don’t mind a few (or more than a few) hours or so spent assembling and painting up the whole set). If you just can’t get enough tactical miniature games, this is a great one (and I can’t stress enough how appreciated the short playtime is)!

War of the Ring (10) – As far as reenacting the events of The Lord of the Rings, this is THE game to get. The theme practically drips from this game: the thoughtfully written cards, the miniatures, everything. The gameplay will definitely have you on the edge of your seat as Sauron steamrolls the armies of Middle-earth mercilessly while Frodo makes his inevitable way to Mount Doom, hoping to do so before too many cities fall or he takes too much corruption. It’s pretty rules heavy, but, come on, that’s nothing that can’t be overcome after 20 or so plays!

When I Dream (7) – This unique game has players take turns going around the table saying one word to get a blindfolded person to guess what is pictured on the top-most card. The twist is that half the players will be trying to get the blindfolded person to guess incorrectly, making the real game being to figure out who the saboteurs are. I see what it’s trying to do, and it works, but I don’t tend to find it super fun…maybe it’s just the short term memory elements of “wait, which voice was it that I think might be trying to trick me?” that make it feel like too much work. Looks great though.