This month on Minor Key Monday I talk about what, astoundingly, might just be the most embarrassing song featured on MKM yet:

Being a bit of minor key maniac means that my taste in music often veers into the dark seas of ridiculous cheese.  See, it doesn’t really matter how obviously silly a song is, if it has that epic, mournful quality that immediately sends me into a giggling fit of melancholy ecstasy, then, that song is a song for me.

Deine Lakaien is a German Darkwave/pop band formed by two guys, neither of which is named Deine Lakaien.  One, Alexander Veljanov, does the vocals and has totally sweet Gary Oldman Dracula hair, while the other, Ernst Horn, writes all the music and plays all the instruments and has normal hair: 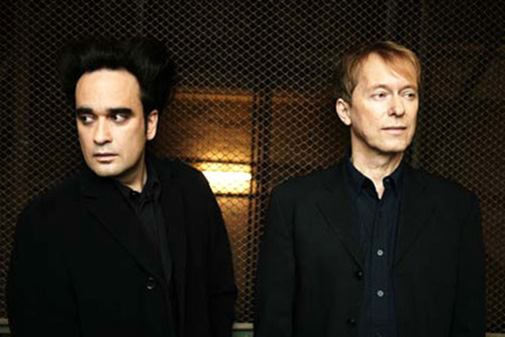 And yes, if you haven’t listened to the song yet, it does indeed sound exactly like what you would expect a song sung by someone with hair like that would sound like.  See, I’m actually pretty new to the whole Deine Lakaien thing, I only heard one of their early famous songs “Love Me to the End” (most likely after some typing in some kind of “I want to listen to a darkwave eurotrashy song about like love or like sorrrow or something” search on youtube) a couple months ago.  It was pretty great, but not quite enough to make the hallowed halls of Minor Key Monday.

Thus, I was pleasantly surprised to find that, after downloading their most recent album, 2010’s Indicator, I liked the opening track even better!  It was less euro-dancey, but it made up for it with some really sweet high pitched synths!  Also some badass acoustic guitars just on the right side of new age elevator music!  Plus the lyrics were all about autumn leaves and like dreams of love and stuff, how badass and/or sweet is that??:

Now, I realize that some of you might be saying: “but Isley, none of those things, especially not that dude’s hair, should be on anyone’s list of badass and/or sweet things, not even at the very bottom!”  Well to that I say “Poppycock!” If liking Diene Lakaien is wrong, than I don’t want to be right.

Though, that being said, I could see a strong argument against broadcasting one’s love of Diene Lakaien to the internets, but we’ll just chalk that one up to poor impulse control.

I played this song and the cats woke from a deep sleep and looked around in confusion. And then they went back to sleep. Interpret however you wish.

I’m sad to report that this feature has jumped the shark.

Maybe they had a dream? …that a wave came floating
like a gleam?

I was actually pretty cool with the hair. Looks like my sophomore yearbook photo.