I always have to stop myself when I say I like “all kinds of music”.  Because, honestly, that just isn’t true, there is really only one kind of music I like.  No, not [just] Black Metal, I’m talking about music in a minor key.  I mean, I’m a pretty happy guy, but there is something about sad, sad songs that just does it for me.  I don’t dislike Vivaldi’s “Spring” and “Fall”, but I far prefer “Summer” and “Winter” (guess which seasons he writes in a minor key).  “Satisfaction” is a fine song, but I’d rather listen to “Paint it Black” any day…you get the idea.  Basically, it don’t mean a thing if it ain’t got that sting [of soul crushing sorrow and sadness].

This month on Minor Key Monday I discuss a synthpop song that is only marginally more complex than one of Von’s one riff masterpieces:

Because I discover the majority of MKM fodder via watching movies, I meant to write this post back when Drive came out.  I’d never really heard any “synthpop” before Drive, but from the first notes of this song in the opening sequence I declared the Drive soundtrack “fucking epic”–an appellation I do not use lightly.  The rest of the songs were maybe even better, but there was something about “Nightcall” that just stuck with me.

It honestly isn’t much of a song, just that minimal three note ascending progression with a couple retro “choruses” to mix things up.  But, like all things I love, it really nails the atmosphere!  That midtempo melancholy riff is exactly the kind of thing one would listen to while somberly driving around a near-future dystopian megalopolis.  Maybe with some badass sunglasses/goggles on, despite the fact that it is night, and even if it were daytime, the sun hasn’t penetrated the smog in decades anyway.  And maybe everything would be lit in neon colored lighting from the omnipresent advertising.  Basically, it would just look like the Nightcall EP cover: 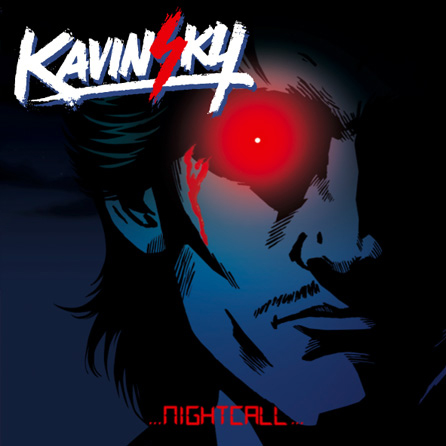 It’s just too bad that Kavinsky only had like 5 songs total until his first full length came out last year!

Getting a file not found when I try to play it.