This month on Minor Key Monday I talk about Sun Ra before he got all experimental:

It’s no secret (based on the occasional snide remark on here) that I’m not a big jazz fan.  I mean, don’t get me wrong, I don’t dislike jazz, it’s just that half the time when I try to listen to it I end up feeling a bit like this: 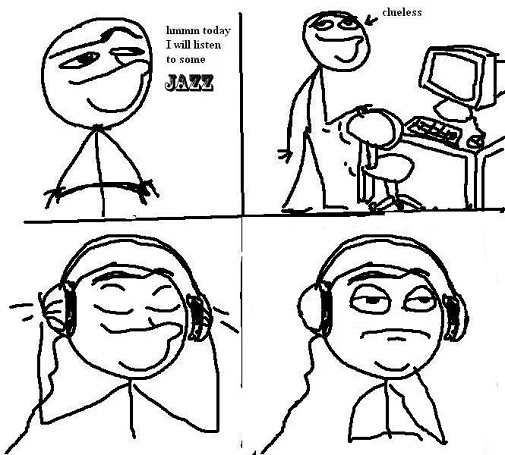 (Sadly, I did not make that picture, but I’ll go ahead and claim it for this website in the name of the internet.)

This is even more problematic when you consider the fact that my dad is himself (despite also being a founding member of the Pagan Necrofolk black metal band Unruh) a jazz musician.  And even though he is technically a “free jazz” musician and thus considers playing anything with a rhythm or melody a waste of his time, he does still like to slum it up with some more traditional jazz.

Thankfully Sun Ra’s 1959 album Jazz in Silhouette was always there to bring the family musically together.  Whether it is hanging out on the deck watching the cows in the pasture, or pulling the couch into the kitchen for a cooking party, I will invariably request “that one Sun Ra album I like” (or, the previously honored on Minor Key Monday, Duke Ellington–whose music was not dissimilar to today’s song) whenever I’m back home listening to music with the family.

Sun Ra went to do some wild and out there music, but Jazz in Silhouette is pretty straight ahead for the most part, especially the opening song “Enlightenment.”  But man, what an opening riff!  Once heard, it is not soon forgotten; my dad always knows exactly which song I’m talking about when I say “hey, what’s that one Sun Ra song I like?”  The next track, “Saturn,” might be more interesting (and features its own classic riff), but “Enlightenment,” with its simple, elegiacally mournful themes is the one that sticks with me the most.

Are there parts that are too jazzy for me?  Well sure, but, hell, what do you expect from a guy who pretends to be indifferent to jazz music?