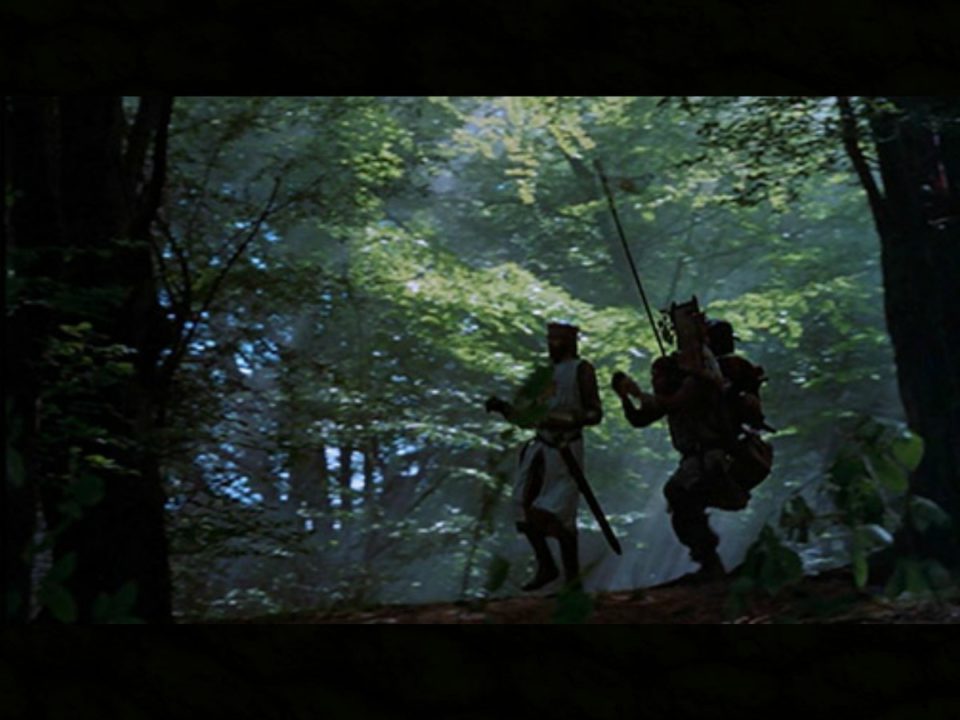 Everybody knows that Monty Python and the Holy Grail is (along with This is Spinal Tap) the funniest movie of all time.  I could go on and on listing all the funny parts, but, bottom line, if Brave Sir Robin soiling his armor, or the guard trolling the king at the Swamp Castle, or the fact that Arthur can’t count to 3 aren’t the most hilarious things you’ve ever seen, there is just something wrong with your sense of humor.  But I’m not here today to tell you why memorizing every single line from this movie is such a legitimately important nerd rite of passage.  No, today I’m here to discuss how such a “silly” movie can, at the same time, be such a total cinematic success.

I love movies set in medieval Europe.  From Perceval le Gallois to A Knight’s Tale, if it has anything to do with a lack of indoor plumbing or jousting, I’m there. I would even go so far as to call many of them some of my favorite movies!  Thus, like This is Spinal Tap, Monty Python and the Holy Grail is already preaching to the choir.  However, what is so surprising about about a silly comedy film with such a minuscule budget is that it somehow ended up being the most authentic cinematic representation of the middle ages that I’ve ever seen.  It’s kind of like those doctors who tell you that Scrubs is actually the most realistic TV show about doctors–it just doesn’t seem like it could be true, right?

And, to be fair, I haven’t physically lived in the middle ages.  However, I’ve lived there in my head for the last 32 years, so when I say “authentic medieval,” I’m of course talking about a land of fairies, dragons, unicorns, and shit.  No, literally shit, the fantasy world in my head is not oblivious to the downside of the aforementioned lack of indoor plumbing of course.  But still, whatever ridiculous picture of medieval times I have in my head, the Pythons freakin’ nailed it with Monty Python and the Holy Grail.  And their budget really was tiny.  The movie was made for around 225,000 pounds (roughly 350,000 dollars, which would be around 1.5 million dollars today after it is adjusted for inflation).  In the hands of lesser creators, this small budget would have turned into a bunch of cheesy jokes about how shitty everything looked.  And sure, they do milk it for a few laughs with the coconut horse gag (since they couldn’t afford actual horses), but overall, this does not appear to be a movie that ended up being a visual disappointment for anyone involved.  Camelot might only be a model, but I thought it was a damn good looking model at that.

And yet, it isn’t the special effects that make the film work, there is something else, something indefinable about the look of Monty Python and the Holy Grail that creates a visual feeling unlike any other movie.  There is a truly bleak atmosphere throughout the film, grey skies, grim forests, crumbling castles, mist and smoke, mud and shit, and everywhere a kind of melancholy sense of doom.  Though I have my issues with most of Gilliam’s movies (telling a tight story has never been his strong point), you can definitely see the dark seeds of the kind of sardonically grandiose production design that would be such an impressive part of his later films.  Even Gilliam’s cartoonish animated bridges between the loosely connected skits of the movie utilize an art style that merges flawlessly with the live action production design.  For as much as I love everything about the production design of Excalibur, I would be hard pressed to say that Monty Python and the Holy Grail was not an equally impressive tour de force of medieval atmosphere.  Quite a feat considering it had less than one twentieth the budget of Excalibur.

Last month I discussed how personally affecting the right musical score can be for a film, and I believe that this is the other half of what makes the medieval atmosphere of Monty Python and the Holy Grail so perfect.  Yes, Excalibur had the epic as balls “O Fortuna” (along with a shit-ton of equally epic Wagner), but I honestly think that the “Brave Sir Robin Song” is the more effective piece of music (really, even as an instrumental, that song would fucking rule!)  Everywhere, from the opening credits to the main repeated theme, the music not only merges with the visuals, but elevates them to a new level of heightened fictional realism.

So yes, it is a silly movie.  But would I really remember the “She turned me into a newt!” line so fondly if I wasn’t at the same time so impressed with the medieval village that John Cleese seemed to inhabit? Well, maybe, that scene is pretty much comic gold, but the fact that Gilliam and Jones took the care to make their movie as atmospheric and visually impressive as it was funny really went above and beyond what anyone could have hoped for from Monty Python’s first cinematic outing.  And, funny as the movie is, I believe that it is this unique medieval atmosphere that is the real reason for the film’s enduring legacy as every nerd ever’s favorite and most quoted movie of all time.