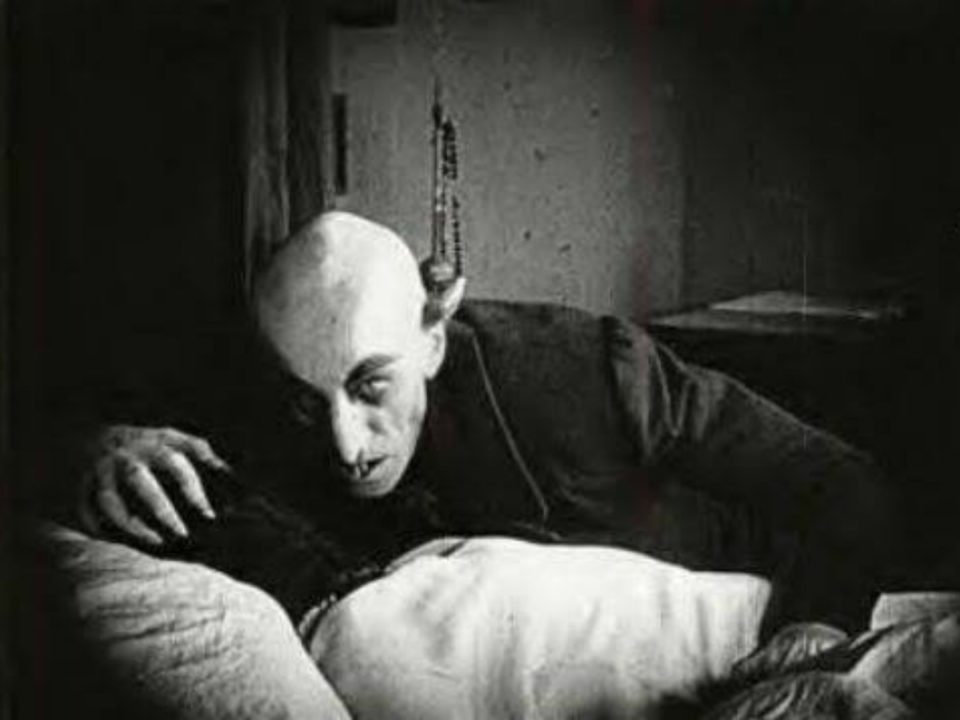 Silent films get a bad rap.  Even among film snobs there is the attitude that “yes, they are important, but come on…wouldn’t you rather watch something a bit more polished?” However, while the acting is not as naturalistic as we are used to (a style developed due to the lack of sound), the silent films from the end of the period (late 1920’s) like Napoleon, The Docks of New York, The Passion of Joan of Arc, Pandora’s Box and many more were not just artistic, but technical marvels that rival anything that has been produced since.  The best silent films were daring and innovative, they took chances that seem ahead of their time even today.  And F. W. Murnau’s Nosferatu: a Symphony of Horror is undoubtedly one of the best of all silent films (and also quite early for one of the “great silent films” as it was made in 1922).

Nosferatu is essentially Brahm Stoker’s Dracula, with minor name and plot changes since Murnau did not have the rights to make Dracula (this lack of rights also led to the destruction of the best prints of the film by the Stoker estate after its release).  The story is familiar: a man is sent to Transylvania to sell a house to Dracula, but upon his arrival Dracula (“Count Orloff” as he is called here) is fascinated by a picture of the man’s wife, traps the man in the castle, a then heads to the man’s house where “shit gets real”.

It is an old story, and utilized more as a loose framework for the imagery rather than as a strong narrative backbone.  The images however, have such an undeniable power that the film becomes something beyond narrative from the start.  How did Dracula get the German real estate agent Renfield under his thrall and why does he want to move to Germany in the first place?  Who was the horseman that delivers the man’s letter if no one would approach Dracula’s castle?  What exactly is this connection between the man and his wife and Dracula’s obsession with her?  How in the world do you get to Germany from Transylvania by sea?

None of these questions actually matter however, for the narrative works within the laws of its own dream logic.  Dracula is portrayed with such an otherworldly, inhuman intensity that to question the narrative becomes a meaningless gesture.  Dracula exists and has always existed, as a force of evil beyond human understanding.  When he is gone the world will return to normal and his castle revert to the ruins it always was.  But while he walks the earth nature itself bends to his will.

This aspect of the film’s horror is probably what appeals to me.  To be sure, Nosferatu is a horror film, a genre that I (shockingly to most people) don’t really care for.  I like cynicism, baseness and nihilism in film, but I don’t enjoy watching “all to human” brutality.  I don’t like films about serial killers, rape, gore for gore’s sake or any other such spectacles of human savagery that most “horror” films are full of.  But while some would claim that Dracula in Nosferatu is no different from any other indestructible killing machine you might find in the usual horror films, I think he (or at least the purpose of the movie) is different.

As opposed to the typical slasher film, Dracula’s evil is not merely to murder, and the terror or watching Nosferatu is not in the visceral fear of death.  The horror felt in watching a young coed being chased by a chainsaw is a cheap, manufactured terror designed to shock all the way up to the splatter of gore upon her demise.  Dracula bringing plague to Germany upon a silent ship of dead sailors is a very different image.  You don’t fear for the sailors, you know their deaths were assured when the coffins were brought aboard.  You don’t fear for Europe, even the plague rats that accompany Dracula upon his journey are guaranteed to spread their death upon arrival.  You fear the very notion of Dracula, the idea of an evil beyond our understanding that will arrive in a storm of destruction.

I think this is why I love Nosferatu but wouldn’t want to sit through a film like Halloween or Friday the Thirteenth.  There is an undeniable terror to every image in the movie (be it it a shot of kittens, landscape or Dracula’s inhuman face), but you aren’t able to exactly put your finger on it.  And yet even in the face of this almost Tolkienesque, Sauron-like evil, humanity does have a chance.  Through self sacrifice, the ultimate irrational rational act, even an otherworldly demon like Dracula could be brought down.

This is not a story grounded in the cheap realm of actual human actions but rather a story that works in the realm of myth and archetype.  Behind every serial killer there is the notion of a far greater evil in the world, and behind every slaughtered victim there is the notion that humanity has the capacity to triumph in the face of it all anyways.  I can’t say that these archetypical ideas are truth, but their existence buried (but not forgotten) within the dark corners of the human mind keeps humanity from the abyss nonetheless; what greater example of their power (and thus the power of the film Nosferatu) could one need?

do you know if and where someone can download this film

Torrents are the easiest place to illegally download most movies: http://torrentfreak.com/how-to-use-bittorrent/

Though it looks like you can get a good copy of Nosferatu here: http://avaxhome.ws/video/nosferatu_by_murnau.html