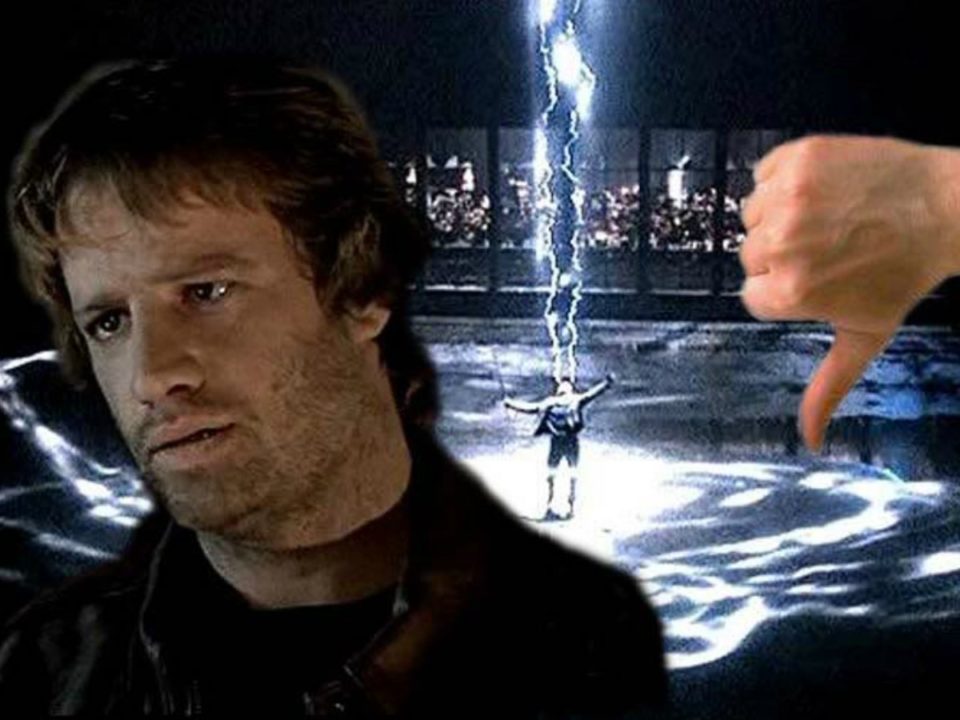 I am a pretty big fan of portraying myself as a PFC (pretentious film cock for those not in the know). I throw out names like Ozu, Bresson, Dreyer as if they are all that is needed to prove I belong to some elite cinematic club. But even someone who consumes such a careful movie diet as I do can not deny the appeal of a bit of good old fashioned “action”. This is also not to say that an action movie (or any movie with the goal of entertainment over enlightenment) can not be high art. Robin Hood (Flynn or Fairbanks), Rio Bravo, hell even something like Die Hard (which I’ll admit I have not seen in years, but I bet it will hold up) are all examples of guilt-free guilty pleasures. But sadly, since the advent of the Hollywood Blockbuster model (thanks a lot Star Wars); true “pure entertainment” classics are few and far between. This was made all too clear as I returned to one of my teenage year’s favorites, Highlander.

Let’s start with the acting. I will not deny that Christopher Lambert has a certain strange appeal. I mean, he is pretty much awful and yet he has a weird unexplainable charisma that somehow works for him. But what the hell was he trying to do with that accent? And the constant painfully wince-inducing pained winces? Overall I’ll admit he somehow “works”. The other performances range from the mildly inept (the “girl”), the out of place (Sean Connery) to the “good yet over the top” (the bad guy “Krugar”). Bottom line, the acting could have been worse.

Next, let’s look at the camerawork. The director got his start in music videos and it shows. The camera seems to have been mounted on a tiny helicopter that dramatically (excuse me, DRAMATICALLY) swoops around the scene for much of the movie. I also can not remember the last time I saw a fisheye lens used so much. I will say that overall the shots do have a certain dark and gritty atmosphere that serves the movie well. There are also many beautiful landscapes–though they are often ruined by the constant and unnecessary helicopter circling (the mountain pinnacle sword fighting “montage” with Connery is particularly laughable). Bottom line, again it could have been worse.

Let’s move on to the pacing and direction. Despite an obviously heavy hand I have to admit the whole mess barrels along at a fairly brisk pace. Aside from a major problem with the flashbacks which will be discussed next, I have to say things were overall passable, though tough to evaluate when so many scenes were ruined by the silly camerawork. Bottom line, the director managed to keep it all together.

Finally we get to the script. First, I’ll say the movie could have done without any of the flashback sequences. They were awkwardly inserted and seriously disrupted the pace of the movie. There were plenty of wince-worthy dialog moments as well, along with some overly flowery Connery lines, and an abundance of cliches (it was 1986…did screenwriters really still have people say things like “tonight you sleep in hell!”) The romance was also unconvincing and lazy.

Now we come to the real problem with the movie, its nonsensical story. Basically you have a movie about some random good and evil people who can’t die that are running around New York City trying to chop each other’s heads off so they can get “the prize”. Now, I really want to like that plot, seriously I do. I mean, it has swords and ass-kicking and everything that is awesome and/or sweet. But why do they have to kill each other (no, “it’s the quickening!” does not explain it), why can there “be only one”? What is this “prize”? (Yes, they do tell you and yes it makes no sense). I get the idea that the extent of the thought put into the script amounted to an “alright, we should swordfight at this point in the script…we’ll use lots of smoke and sparks and it will be awesome!” There was just no effort to raise the movie above the “give the audience what they want” level. And what the audience apparently wanted was swordfights, sex and a lot of Queen blaring on the sound track. I would have liked a little more, namely a coherent story.

So, in the end, we have a movie that is fairly average in most respects that could have risen a lot higher in its genre, especially considering the weak competition. Without any attempt at an intelligent story or coherent narrative, I found myself checking the running time to see how long before it was over far more often than I should have. It’s like reading Atlas Shrugged: you want to like it, but it sure is hard to when it so blatantly insults your intelligence at every turn. My standards are pretty low for these kinds of movies, but Highlander couldn’t quite meet them.

One final note: Don’t have your bad guy move around in a fight by only using handsprings. Yes, it looks kind of cool. But no one believes that is either a quicker or more efficient method of movement. It just makes me sadly shake my head…and giggle a little.

One second final note: I’ve had that goddamn “I am immortal…” song stuck in my head now too. After googling the lyrics, it is probably also a bad sign that the song makes more sense than the movie.