An Open Letter to the New York Times RE: Your woeful lack of fictional fact checking. 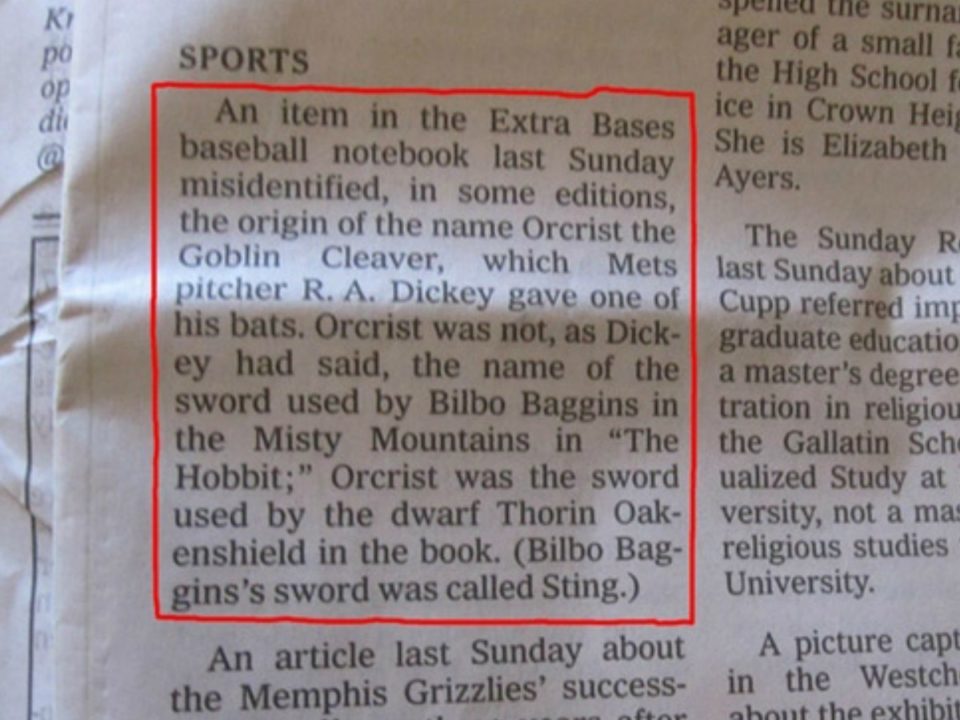 Hello New York Times, I have a skeletal dragon sized bone to pick with you, and I care not for any feelings that may be hurt along the way.  Who am I you ask?  Well, you may not have felt the sting (no, I am not referring to what, at this point, I can only assume you imagine was the name of Gimli’s battleaxe) of my internet raeg before today, I’m afraid I must bring the full brunt of my not inconsiderable weight down upon your newspaper like a sack full of Warhammer dice.  That’s right, you tried to spice up your poorly read sports page with a hot Tolkien injection and failed MISERABLY.  And then, in an ill advised attempt to correct your blunder, you only managed to compound your mistake.  Read on if you think you have to stones.

I’m not here to talk about the original article.  I gather your offices received my many irate voice mail messages (I assume my use of Sindarin was not an issue for your staff members in charge of Elvish translation) about your original error.  You are lucky I even caught the first article I might add.  It would have completely escaped me had I not happened upon the original article while using the sports section for the 1:10 scale papier-mâché AT-AT I am constructing in my mother’s garage.

I am a reasonable humanoid.  Though I did not get the immediate apology I requested in my phone messages last week, your immediate correction seemed to be apology enough.  At least at first.  Then I read it and my head exploded like a bag of holding inside a portable hole.  How in the name of Crom do you print a retraction that is itself more full of factual inaccuracies than the original retracted article?

No, I’m not talking about the way you completely ignored the origin of Orcrist in the hidden elven city of Gondolin, I know the details of its escape from the ruin of Beleriand are hazy.  Let’s just refer to the original text (which is apparently something you did not feel the need to do) to see the magnitude of the error you have reprinted in your “retraction.”

There were lots of clothes, too, hanging on the walls-too small for trolls, I am afraid they belonged to victims-and among them were several swords of various makes, shapes, and sizes. Two caught their eyes particularly, because of their beautiful scabbards and jeweled hilts. Gandalf and Thorin each took one of these; and Bilbo took a knife in a leather sheath.

Therefore, I must demand a correction to your correction (and this time I must also insist on an apology).  I can tell you that, though the fiery fate of the Shuvs and Zuuls during the third reconciliation of the last of the McKetrick supplicants makes Arrakis seem like Hoth by comparison, it is merely a prestidigitated candle flame when set against the Balefire of vengeance that I shall bring down on your questions and complaints inbox if you do not immediately conduct a Pluto sized revocation of Sting’s sword status.

Consider this your last warning.

“I can tell you that the firey fate of the Shuvs and Zuuls during the third reconciliation of the last of the McKetrick supplicants will make Arrakis seem like Hoth when compared to [the?] Baelfire of vengeance that I shall bring down…”

I think this embarrassing episode has pressed home the need for major newspapers to employ full-time Tolkien experts. How much more do we have to suffer before action is taken? I really hope Obama addresses this in his next campaign. I think we should have a LARP-a-thon to raise awareness.

Hah, damnit, I just changed that actually…I think I tried to cram too many metaphors into one sentence. As written it said: “This really hot thing, will make this other really hot thing seem like a really cold thing when compared to this even hotter thing.” Which, I think isn’t quite what I wanted to say?

As long as we have the original quoted…which version works better? I’d hate to lose the Ghostbusters reference!

The funniest thing about the original was how much ridiculously nerdy shit was stuffed into that one sentence. You definitely need to change it back.

Ok, I’ll figure out a way to phrase it…I think with four things being compared I need to just switch it to an analogy.

Heh, ok, why only use 4 nerdy references when you can use 5? It now says what I want it to…at the cost of being even more of a run on sentence. I hope you’re happy Brian.

And now I should probably get on my homework…

THANK GOD YOU FIXED IT.

(I was worried you were actually going to get some homework done! “NOT MY ISLEY,” I said to myself!)

You rock. I totally thought you were going to go off on Orcrist’s origins. To be fair, though, whether Sting is a sword or not, Bilbo’s “sword” was Sting. They just needed some quotes. 🙂

I hate to nitpick (oh, wait, no I don’t) but, although this is an improvement over your first modification, the original is still best, primarily because of the way the comparisons were intertwined.

See, according to the original statement, the fiery fate of the Shuvs and Zuuls, though decidedly hot, will make Arrakis seem like Hoth *if and only if* it is compared to incalculable heat of the forthcoming balefire of vengeance.

The second revision, on the other hand, takes it for granted that the fiery fate of the Shuvs and Zuuls makes Arrakis seem like Hoth, and that the forthcoming balefire of vengeance, when compared to said fate, will be hotter still.

In the second version, then, the comparison between Arrakis and Hoth is superfluous due to the fact that said comparison isn’t contingent upon any other set of circumstances.

In conclusion, me think first one best!

p.s. If you think your education is more important than your blog, you’ve got another thing coming, mister.

Ok, here’s how I see it, I still don’t think the first one really makes sense (though it did flow better). I don’t get why a comparison to something even hotter would change the comparative effect of the belly of a Slor upon Arrakis. Like, why would something making the Shuv/Zuul fate seem LESS fiery therefore make Arrakis colder in comparison? It seems superfluous in both versions to bring up the Shuvs and Zuuls. I think the only way to avoid the superfluity is to make an analogy: “Arrakis is to Hoth as my wrath is to the belly of a slor.” And, while amusing, isn’t quite the same glut of information that all of our versions are…

Though, perhaps the Ghostbusters reference isn’t superfluous in the version I have now. Because, first itestablishes how scorchingly badass the fate of the shuvs and zuuls is through the Hoth/Arrakis comparison, then goes on to say that even THAT is nothing compared to my wrath. Also I work in my favorite D&D spell Prestidigitation (which, as everyone knows produces the weakest of all magical fires), so that’s another point in its favor.

I’m still not convinced that the “if and only if” implication of the first version actually makes any sense when you really think about it.

Heh, to be fair, pretty much everyone except for Jim Bowie and Crocodile Dundee would call Sting a sword too. Heh, I even left out the quote where Tolkien specifically says it was “like a short sword” to someone Bilbo’s size. But hey, I had to nitpic something! 😉

For anyone who doesn’t know a Shuv from a Zuul, I’m referring to this, probably the best scene from Ghostbusters: http://www.youtube.com/watch?v=zjzZhTS_xa0

Yeah, you’re absolutely right. The “if and only if” statement is saying the opposite of what it should.

Geez, Isley, how stupid of you to ever say such a thing in the first place!

I hereby agree that the current version makes the most sense, while staunchly adhering to my opinion that the original was funniest.

Maybe I should add some more nerd references to my current version? 😉

Another vote for “the first one was hilarious-er.”

Dude, like anybody who reads your blog *isn’t* going to know what you’re talking about there…

Well 11 people have clicked on that link since I posted it. Luckily I can’t see who they were or I’d have to write a new open letter to them for not knowing that quote.

So you are saying I should quit doing homework and go back to figuring out how to word that last sentence? Which, come on, the new version is basically the same!

Don’t embarrass yourself by explaining it. If they don’t know a sloar from a sarlacc, they need to GTFO.

Ok, now that was funny, Amy. Not to mention just dripping with irony.

Hahahaha, that was exactly what I was thinking (“Since when is Sting a sword??”), but I didn’t put it nearly so well. Hats off to you!

I clicked on it because I happen to enjoy that scene.

Honestly, the other 10 clicks were probably me.