An open letter to Wizards of the Coast RE: Magic 2010 Rules Changes. 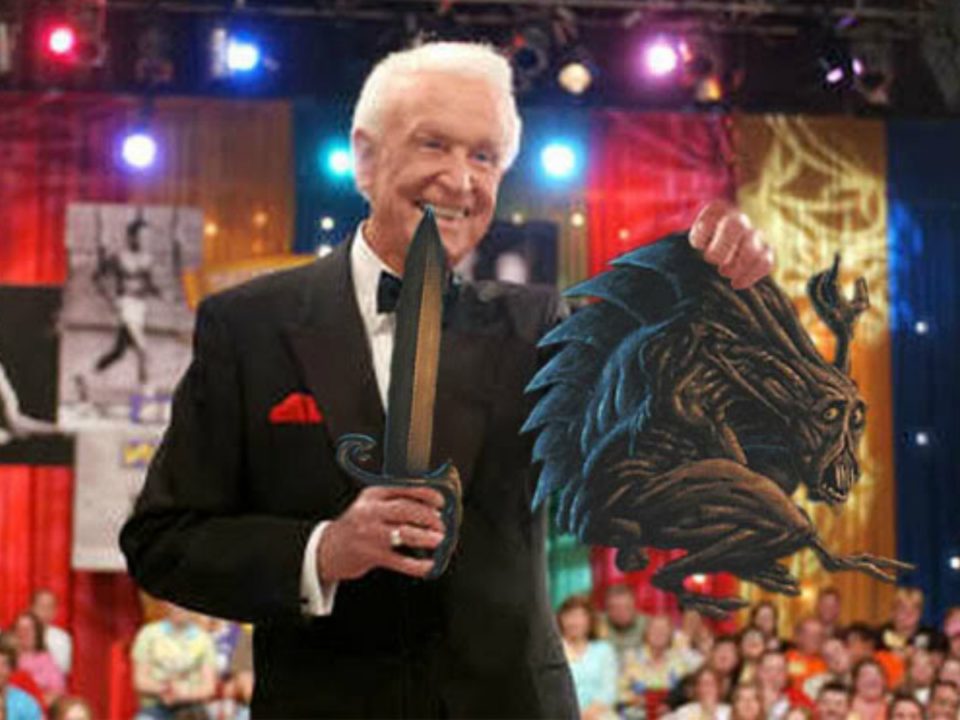 I like to think that I will someday meet the woman of my dreams.  She will be everything I have always sought in the fairer sex, and our coupling will rival the epic fornication of Beren and Luthien.  So imagine my heartbreak if I were to one day wake up next to this paragon paramour to find that she had suddenly lost her softball-sized purple anime eyes, chain mail lingerie collection and third breast (Total Recall style, not Anne Boleyn style) all in one night.

Where now is the “helm and the hauberk and the third breast hanging?” I might say, only to realize they had passed like rain on a mountain.  If you, Wizards of the Coast, can find it in your black hearts to imagine my sorrow at no longer even being able to even recognize something so dear to me, and then multiply that tenfold you will have the barest understanding of the sorrow I felt when I read of what you have so callously taken it upon yourselves to do to the Magic the Gathering rules set.

My accursed “sausage fingers” are trembling  with Internet rage so much that they can barely find the keys to type this.  I thought I had been angry at past rule changes when, for instance, you made my Unnatural Selection, Wall of Stone, About Face deck suddenly NOT WORK AT ALL with the “defender” debacle.  But that wall rule change was more akin to explorer John Kendrik’s accidental claiming of Japan for the United States than it was to the current Hiroshima sized insult you have bollock smacked your devoted gamer base with.

I am not referring to the needlessly baroque changes to the mulligan rule.  I have always and will continue to play with my far superior house rule variant where any hand with all or no lands shall result in an automatic free mulligan (along, of course, with those unplayable hands consisting of 1, 2, 5 or 6 lands).  It is not a perfect system as I have been mana screwed countless times with the dreaded 3 land opening hand, but so sure am I that my system is far superior to the mess you posted that I have not even bothered to read the new version.

I will take a similar stance with regards to the rule changes concerning deathtouch and lifelink.  Since I am not sure what a “state based effect is” I will continue to play as I always have, if you can physically touch your opponent’s card with a deathtouch or lifelink card you automatically kill that creature or gain your life (during the combat phase only of course!)  Which reminds me of an amusing story about how I once tore my Thicket Basilisk into tiny pieces which I used to wipe out my opponent’s entire Thallid horde…but I’m afraid such revelries are ill suited for a diatribe such as this.

Finally, I am not overly concerned about the dubious (at best) terminology changes.  If you now want to call, to name one instance, the “in play” area the “battlefield”, that is your prerogative.  It has no functional impact on gameplay.  I will continue to call the playing area “The Thunderdome” and my draw deck (or as you call it, the “library”) “Bartertown” just as I have always done.

The first change to truly arouse my ire was your announcement that you are doing away with “mana burn”.  That’s like saying you were going to remake Monty Python and the Holy Grail with nary a shrubbery in sight!  Sure that scene can be a bit patience trying, but is there a more iconic joke in that movie than the Knights who say “Ni” (ni!) and their desire for a shrubbery?? (Well, aside from the hilarious running joke of Arthur being unable to count to three of course!)

But I digress again; the crux of the matter is that this one rule change may single handedly drive me from a game I have loved for years.  I am currently undefeated in over 800 games with Christian (the neighbor kid) due to mana burn.  I have always kept one land open for emergencies and simply mana burned myself the last point of damage for the few games that have gone against me due to getting a manaflooded 4 land opening draw.  Thus I have always been able to say that he didn’t “REALLY” kill me himself (since I did the last point of damage) and kept my winning streak alive.  But now you have taken this away from me just as I may now be forced to take my not inconsiderable patronage (and girth) to greener ccgs.

Your change to the token ownership rule is not without its own grievances, most notably the complete negation of my multiplayer Varchild’s War-Rider’s deck.  Many a game have I diabolically let an opponent build up a massive army of tokens only to mana burn myself to death after he could no longer resist the call of hubris and had attacked with everything.  Not only would his massive army suddenly disappear but he would be left wide open to my team mate’s game winning counter attack!  So what you are now telling me is that this deck has suddenly become worse than my perhaps somewhat less than tournament level (as opposed to all my other decks) Elemental Augury, Reef Pirates deck??

Now I must address the one rule change to rule them all, that is to say, the one that has had an effect on my pocketbook.  I speak of course about the decision to no longer have combat damage use the stack.

It all started back in the “salad days” of magic before “the stack” even existed with the most brutally powerful set ever released, Fallen Empires.  As many of my friends were still playing with holdover Alpha rules which set no 4 card limit on repeats, I of course bought 28 cases of Fallen Empires in order to collect over 4000 Armor Thrulls in order to assemble my feared “We are Legion” Thrull deck (17 swamp, 1 plains, 4007 Armor Thrulls, 1 healing salve, 1 Ebon Praetor).  Many an opponent soiled their armor at the mere sight of that deck which stood nearly 5 feet tall fully assembled. Indeed, it was so powerful a deck that most opponents would concede before the shuffling had even finished!

Sadly my friends quickly shied  away from such brutal no holds barred magic games and decided to make the 4/per rule mandatory in all games with myself and thus 4003 Armor Thrulls were left deckless.  This is, of course, was the main reason you did not bear my internet wrath with the institution of the 6th edition rules changes.  By adding “the stack” with the ability to add combat damage to it, my collection of Armor Thrulls increased in value ten-fold over night.  Since I could now block, put damage on the stack, tap, sac and pump another creature all with one Armor Thrull, a once merely overpowered card became as unstoppable as Red Hulk!

I quickly put my entire collection of Armor Thrulls into individual cardsleeves and safely tucked them under my bed with my collection of Wrath of Khan action figures to let their value slowly build until my retirement.

However, by effectively neutering what was perhaps the best creature you have ever released with your invalidation of the 6th edition stack abuses in the new rule set, you have also destroyed the value of my Armor Thrull collection!  I just checked the current Cardshark prices for Armor Thrulls and they are now only selling for 5 cents each!  The mana burn change was bad enough, this combat damage change is truly the Fremen that broke the Sandworm’s invertebral back!

So what are my demands?  They are simple.  Either completely retract the proposed rule changes or buy my entire Armor Thrull collection at 1000% of their current (bottomed out) market price as I will have no more use for them since I will be forced to leave the game due to the lack of a mana burn loss escape route.

If neither of these demands are met?  Well, let’s just hope it doesn’t come to that, because if it does I can safely say that every Wizards of the Coast employee shall drown in lakes of blood and know what it is to be roasted in the depths of a Slor that day I CAN TELL YOU!!  By which I of course mean you will be subject to yet another angry email.  The Quaffle is in the hands of your Chasers so to speak, so choose wisely.

I enjoyed that. Good luck 😛

Isley, everyone knows that Beren and Luthien only did “it” ONCE. For god’s sake, this is Tolkien we are talking about.

What they did with the stump is another matter…

I have edited the post accordingly. I doubt you would deny the epicness of said fornication at least?

I think that goes without saying. I mean, if you’re only going to do it once…

Somehow not everyone I sent this link to realized I was being facetious:

Wait…Anne Boleyn had three boobs? (Yeah…that’s about all I got out of that.)

What would any of us do without wikipedia?

I have to say this is an awesome post, especially your ultimatum for not giving in to your demands…

“I can safely say that every Wizards of the Coast employee shall drown in lakes of blood and know what it is to be roasted in the depths of a Slor that day I CAN TELL YOU!!”

The Wizards forums are down, I wanted to read post you mentioned here, http://forums.gleemax.com/showthread.php?t=1215663.