An Open Letter to Mythical Meats RE: Your Woefully Uninspired Fantasy Meat Sticks 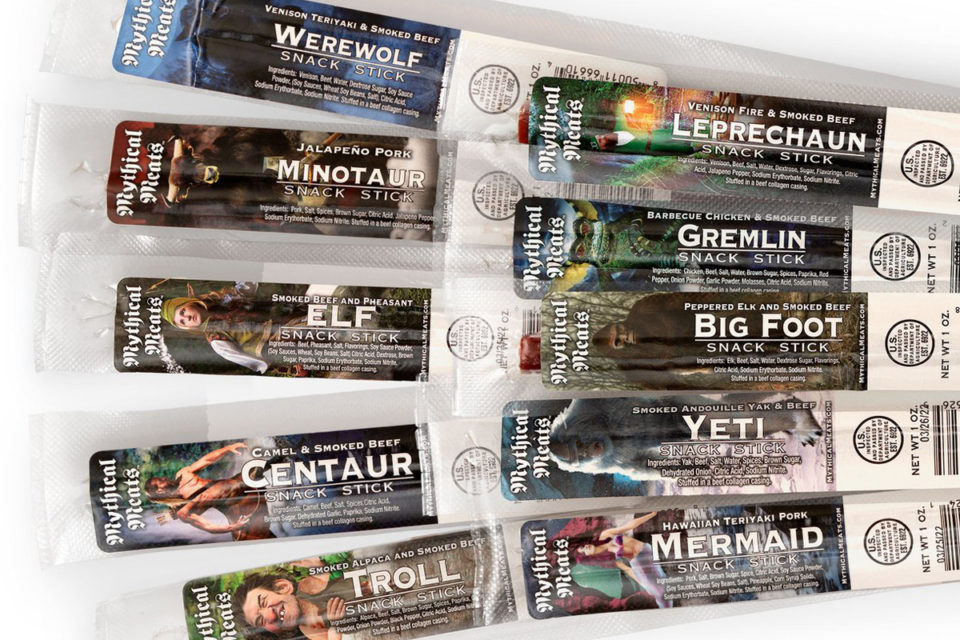 Hello Mythic Meats, Eugene Pendergrass here, you might know me from such pedantic protestations as AN OPEN LETTER TO WWW.ISLEYUNRUH.COM RE: YOUR COMICALLY INEPT ATTEMPTS AT FICTIONAL CARTOGRAPHY, AN OPEN LETTER TO PETER JACKSON RE: RESTRICTING THE HOBBIT TO THREE MOVIES, and AN OPEN LETTER TO THE NEW YORK TIMES RE: YOUR WOEFUL LACK OF FICTIONAL FACT CHECKING to name a few. Imagine my surprise when I checked my mail yesterday to find, not my bootleg Chinese 1:4 scale Megumin, Arch Wizard of the Crimson Magic Clan silicone figurine, but rather a package of your intriguing meat products, sent from my on again, off again friend Stinky Dave. I could only imagine this was his peace offering after having the audacity to claim that Amazon’s new Wheel of Time Series, with the attention span of berserker toddler on a sugar rampage, was an improvement on the pacing of the unassailable books. Meat, in stick form, my second favorite food of all time (after meat, in whimsical dinosaur shaped nugget form), combined with a well-researched hard-fantasy presentation? Win-win-win (Stinky Dave will also win due to regaining my friendship, once more–just as Lancelot and Arthur rejoined for one final arm clasping in the final battle against Mordred’s incestuous legions). Or so I would have forgiven him…had everything from the cryptozoological research to the mouthfeel not been SEVERLY LACKING.

First off, a general word on expectations. I am fully aware that many of these creatures do not (or, at least, no longer) exist. So, let’s not start casting aspersions that I was in any way finally expecting to have my long dreamed-of “mouthful of elf.” If such were the case, I wouldn’t have even tried the Troll (toxic to all forms of life), Werewolf (my shower drain and I have enough issues, and I prefer to remain non-lycanthropic thank you very much) or Mermaid (I don’t eat fish) meats at all. What follows is a meat by meat list of what has amounted to my second biggest meat-based disappointment of the year (after Stinky Dave’s A-1 Gate incident at my mom’s Fourth of July party).

Obviously this must have been your first foray into mixing the fantastical arts with, well, meat, so I suppose I should cut you some slack. On the other hand, if you are going to journey into MY kingdom, you best journey correct. Or, at the very least, journey with a better understanding of the subtle distinctions between various human ungulate hybrids and their proper real world meat analogs.