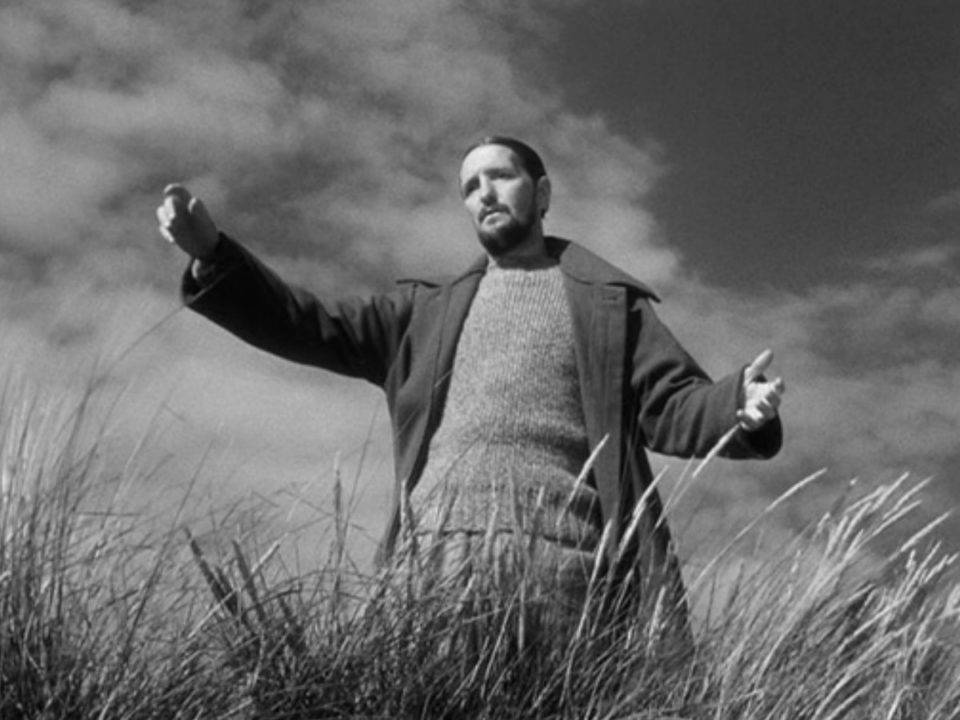 I’ve been having a hard time keeping these posts spoiler free lately, however, this post is a particularly grievous offender.  Because I will be discussing a film, that, perhaps more than any other, one can only see for the first time once, I’d advise anyone who thinks they might want to watch a slow moving Danish drama about faith to stop reading right now.

The alarmingly high percentage of christian themed music on Minor Key Monday notwithstanding, it’s no secret that my views on faith-based belief systems lie somewhere between scorn and loathing.  And yet here I am, not only reviewing one of the most powerful portrays of faith in cinematic history, but also calling it one of my favorite movies.  If I thought I had my work cut out for me when I took the idea of redemption out of Pickpocket last month, it’s really going to take some doing to spin Dreyer’s 1955 masterpiece Ordet in an even remotely faithless light.  I better get started!

I had only seen this film once before, years ago.  Ten minutes into my rewatching of it (for this post) I was already having doubts.  I mean, it was really hitting the christian stuff hard and was pretty slow moving (which, coming from a Rohmer worshiper, is saying something).  Of course, like most slow moving films of worth, it wasn’t log before I was completely drawn in once again.  After my dire spoiler warning above, I’m sure no one is reading this who hasn’t seen the film, but just in case there is someone out there who doesn’t care if they have one of the greatest cinematic revelations of all time ruined for them, the plot basically goes like this.  An old man has three sons, one who has lost his faith, one who, after reading some Kierkegaard, lost his damn mind and believes he is Jesus (seriously) and one who is a nice sensitive kid who has fallen in love with the fundamentalist tailor’s daughter.  The agnostic’s pregnant wife Inger is loved by all, and thus when both her and her baby die in childbirth it is a crushing blow to the entire household.

Then, the insane son regains his sanity and asks god to bring Inger back to life.  As the camera cuts to the dead woman you almost imagine you can see a stir of movement, until, in a move that caught me completely off guard on my first viewing, you realize that she actually did come back to life!  It is hard to put into words how shocking the scene is without experiencing it for oneself.  In a movie that is otherwise played completely straight and naturalistically, Dreyer goes for what should have been the ultimate cop out and somehow makes it one of the most powerful narrative developments in the history of cinema.

So what is he doing here?  The film is preoccupied with the idea of faith (unlike Reygadas’ otherwise brilliant 2007 work of Dreyer-worship, Silent Light, which used the same scene to vastly diminished effect) so was an admirably ballsy move to go ahead and make the prayer for life actually work.  However, as loath as I am to say any reading of a film is a “wrong” reading, I’m fairly confident that Ordet is not trying to show the power of Christian faith through its miraculous resurrection.  Like all great cinematic works, Ordet is not bound to one simple “message.”

By making his miracle such an audaciously taboo shattering act of magic (the atheist doctor even makes fun of the preacher earlier for saying that Jesus was the only exception to the otherwise unavoidable dominion of death) Dreyer challenges any would be believers to ask if this scene is really what they expect to be the by-product of their prayers.  There was no special reason for Inger to return to life other than the fact that she was a nice woman.  It is that familiar twisted christian logic that upholds Inger’s resurrection as a sign of god’s benevolence. The old men take it as a sign of interdenominational (and yet still christian) unity.  The husband uses it to believe again (in a christian god of course).

And yet, Inger’s young daughter, the only one with the faith to actually bring Inger back, only has faith in her insane uncle.  He seems to have the sorcerous powers of a madman, the kind of primeval magic that young children will readily accept as truth (until their parents poison their innocent faith with christian dogma).  For her the resurrection is perhaps closest to what Dreyer may have had in mind: an explainable event upon which we all might attach our own level of mystical significance (to be sure, in no way can it be explained by science).  But this mystical significance has nothing at all to do with a christian god (or even a god of any kind).  It is beyond the games of make believe our societies love to play in the name of religion, it is instead a portrait of humanity confronted with the unexplainable.  Some make up stories about where the moon came from, while others simply revel in its beauty.

Most telling of all is the reaction of Inger when she asks her newly converted husband if their baby lived.  His reply of “yes, he lives in heaven!” does not evoke the same feelings of joy for Inger as it does for him, try as she might.  She has just returned to life, to sensuously kissing her husband’s face, to the joy of human existence.  Her dead son is the one confined to the cold plane of heavenly existence.  Banished to a realm that, if you think about it, is no less false no matter what the method of her return to life.

Dreyer mixes all these elements into his film like a madman with a theological chemistry set.  What we are left with is a film that is equal parts uplifting and unsettling.  Faith is presented both as a force that can move mountains and as the crutch of fools.  The viewer is thrown off kilter and desperately struggles to find something to grasp onto to make sense of the whole brilliant mess.  Hopefully, like Inger, they will find the warmth of life instead of the cold death of heaven.