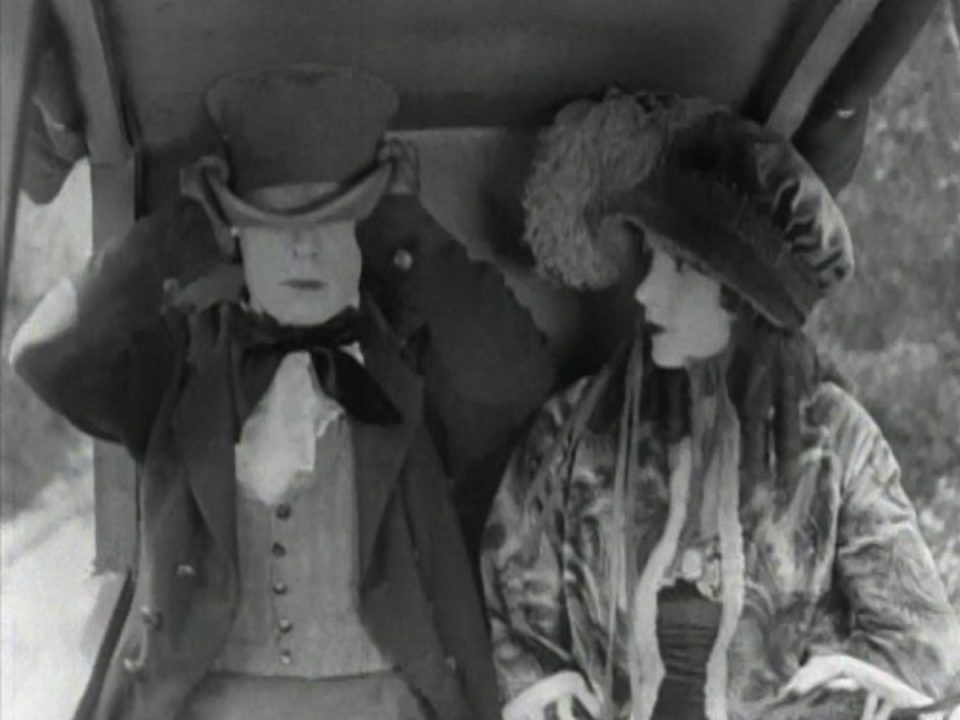 Chaplin or Keaton…that is the question. Actually, not really, they are both great (along with Lloyd, Langdon and the rest of them). Still, I always answer with a resounding “Keaton!” and Our Hospitality is a perfect example of why.

Our Hospitality is the third full length film from Buster Keaton. Buster had little control over his first film The Saphead (notable primarily for a marvelous stock market sequence at the end that must have been all Buster’s doing), and his second film, The Three Ages, did not quite reach the level of his best work (though full of brilliant sequences). Our Hospitality is quite simply one of Buster’s masterpieces. The story, gags and Buster persona were all in peak form; surpassing even the best work by Chaplin, Lloyd and Langdon in their full length films.

Keaton’s films were more than a sequence of loosely strung together gag sequences. This is not to say that there were never any scenes that were only inserted for their gag value. But Keaton often made sure that his stories were fully fleshed out and not just excuses for his jokes.

While its basic plot is fairly simple, every frame of Our Hospitality is evidence of the care that Buster took in making it a series of great jokes and a great movie. Whole sequences go by without a single gag and yet they definitely belong in the movie. Chaplin also invested a great deal of care in his underlying stories, but often ruined them with layers of sappy heavy-handed sentimentality and pathos.

While a great movie in its own right, Our Hospitality is also one of the funniest silent comedies. The sheer inventiveness of the humor and quantity of brilliant gags has never been equaled by anyone else. Harold Lloyd came the closest since he consistently hired the best gag writers. This is no slight on his abilities, Buster also hired writers and only Chaplin worked alone. Still even a film like Lloyd’s The Kid Brother (packed with more funny jokes than probably any other comedy), can not compare to Our Hospitality. The film is full of amazing sequences of expertly timed gags that flow effortlessly into each other without breaking the illusion of the story. The beginning train ride is a perfect example of this.

Finally, the Buster Keaton persona is what personally elevates his movies above those made by others for me. Chaplin was the only other silent film comedian with as much charisma and unique presence as Keaton. And the lack of this is what knocks Harold Lloyd out of the top two for me. His on screen persona is just not as interesting as those of Chaplin and Keaton. Keaton was more than just the guy who didnt make any expressions; he was an indescribable screen presence and one of the most gifted and creative comedians of his time. This and the above qualities are all fully represented in Our Hospitality, one of his finest movies.