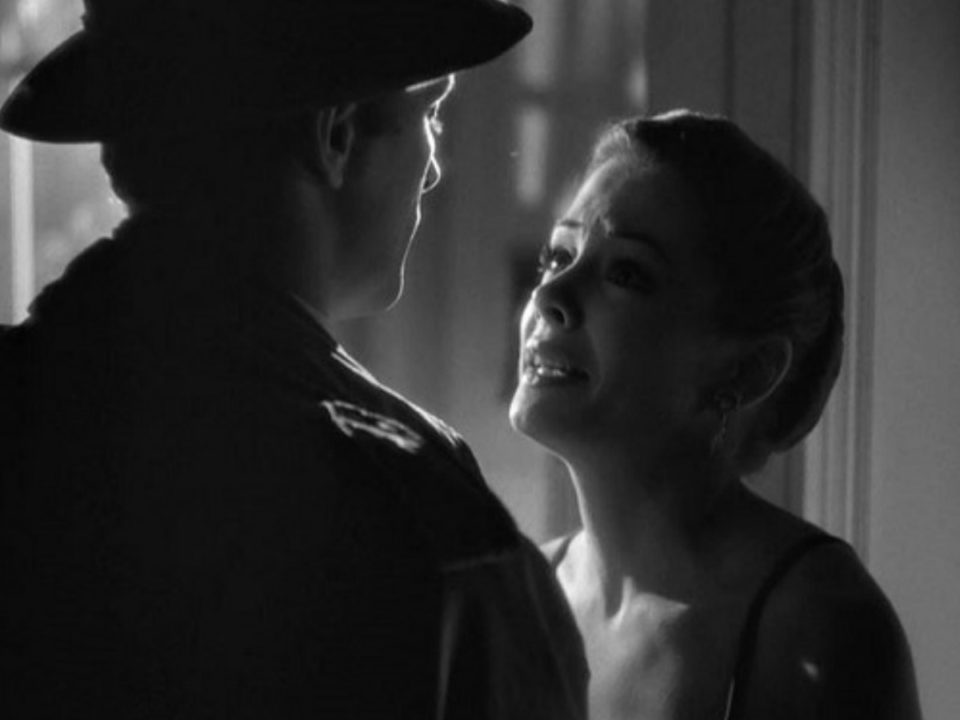 For the uninitiated, film noir can be a disappointing thing.  The colorful dialog often veers dangerously close to camp Calvin and Hobbes “Tracer Bullet” self-parody, while the B-movie visuals sometimes aren’t quite as stylish as modern audiences whose only exposure to the style is from Sin City comic books.  Of course, there are films noir and there are films noir, and today’s movie is, simply put, beyond reproach.

Robert Mitchum plays the doomed antihero Jeff Bailey, a man helplessly caught in the clutches of Jane Greer’s femme fatale Kathie Moffat.  Like the best femme fatales, you get the sense that Kathie might not actually view herself as an evil person, she would most likely claim that it’s not her fault that she happens to be at the center of a whirlwind of fate that seems to suck every man in her life into a maelstrom of destruction that must end in his death.  Feminist readings of film noir are divided, some point to the strength and intelligence of the femme fatale, while others point to the strict boundary of good and evil along gender lines as something less than positive when it comes to representations of women on screen.

Honestly, the correct interpretation probably lies somewhere in the middle.  Maybe Kathie Moffat is just a murdering thief, but she also displays ten times the amount of free agency as any other female character from the 1940s.  And, really, every one of her duplicitous actions could conceivably be written off as mere self preservation.  That’s the interesting thing about film noir.  The femme fatale might seem to be the villain on the surface (sometimes more obviously than others), but the man is always the real reason for his own downfall.

Jeff Bailey was the one who decided to take the job of tracking down someone with such a deadly will to live.  In response to her asking him (regarding her past) “I didn’t know what I was doing. I, I didn’t know anything except how much I hated him. But I didn’t take anything. I didn’t, Jeff. Don’t you believe me?” Jeff Bailey was the one who responded with the deliciously apt “Baby, I don’t care.”  Jeff Bailey might be a tough guy who warns other tough guys not to try anything with him because they are “out of shape,” and responds to questions of when he will die with “if I have to, I’m going to die last,” but for all his macho toughness, he is helpless every time he goes up against Kathie Moffat.

He might know she is evil, the audience might know she is evil, and yet the fact that she makes him (and us) doubt it, if even for a second, is the real source of her power. Sure, she’s “no good,” but, in her brazen acceptance of that fact, perhaps she emerges as the most noble character in the movie after all.  If nothing else, she’s sure a hell of a lot more interesting than that goodie two shoes that Jeff was hanging around with in the town where he was trying to live a respectable life.