Painting in Miniature 2: Up Next, Nurgle 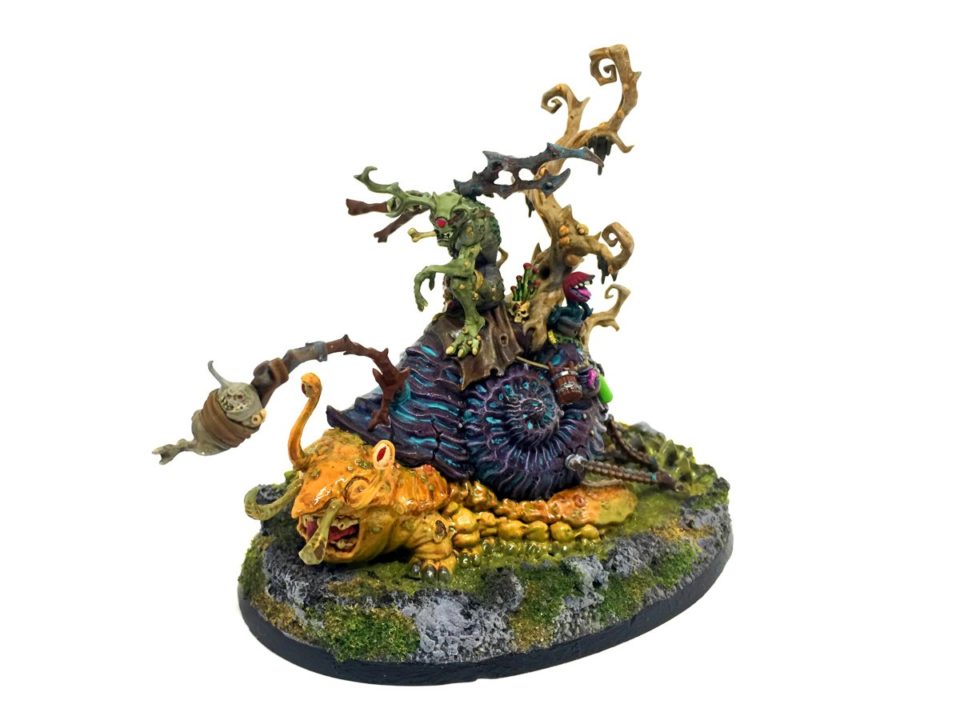 Two years ago (February, 2017 to be exact) I boldly went into one of the final unexplored (for myself) frontiers of nerdy-ass hobbies: I started painting miniatures. This series is an attempt to document the end results of the endless streams of time, effort, and, I suppose, cash that has gone into this hobby to end all hobbies. As I’m still catching up on models, everything in today’s post was painted over the last two years at the same time as all the little Skaven rat-men from the last post.

Nurgle: The Jolly God of Disease

As I always say, I knew I would play the Chaos armies from my first Bolt Thrower album–no knights in shining armor for me, I wanted grim, gruesome, and grotesque if I was going to create a wild fantasy army for a setting as over the top as Warhammer. Thus, despite starting with Skaven (whose crazy inventions also really appeal to me), the completely over the top (seriously, at least 50% of their models, as you will see, are inflicted with grievous gut wounds) Nurgle demons were the models that I really wanted to paint.

I started, as with Skaven, with the Nurgle “start collecting” set. This set was a little boring–no big centerpiece model, and no real opportunities for clever magnetization. Still, no Nurgle army would be complete without their battleline grunts (literally), the Plaguebearers:

I wanted them to tie in to my Skaven army a bit in case I did mixed Chaos (or a Nurgle/Pestilens alliance), so I used Nurgling Green (which all my Skaven have a splash of somewhere) as my base skin color here. These guys actually paint up pretty fast, I start by wet blending the Nurgling Green with Xereus Purple on the stomachs to add some variation to the skin. Then I pick out all the teeth and claws with Screaming Skull, the boils with Ungor flesh, and finish them off with an overall Athonian Camoshade coat. The swords are just Leadbelcher, heavily coated with Typhus Corrosion, Ryza Rust, Nihilakh Oxide, and Nuln Oil, a combination that I use on the majority of my Nurgle metals. Honestly, I coat it on so thick, it really probably doesn’t need that Leadbelcher undercoat. Here are a few models up close:

I really like the variations on the poses that you get with this kit…they are all the same shambling zombie type of creature, but with all the heads, body combinations and arms, you shouldn’t have ANY duplicate models.

I did do a bit of magnetizing on the leaders so I could split this group of 20 into two groups of 10 (mostly due to realizing I won’t be painting up 100 of these any time soon–Plaguebearers suck in groups of 10, but at least groups of 10 will get you a legal army without having to wait years until they are all painted!). Here are my main leaders:

And here are my magnetized Plaguebearers that can be changed into leaders as needed:

As a whole, my Plaguebearers aren’t perfect–my biggest issue with their look being the fact that my “rocky scrub-land” basing technique (which I’ll cover in detail in a future post) is almost the exact same color as their skin. I really like the skin tone, but if I had to do it again I’d probably go with a super pale rotting flesh of some type to get them to stand out against their bases more. I’m only 20 models in, and a REAL Nurgle army probably wants 100+ of these guys, so I guess it’s not too late to change (though I can almost guarantee I won’t). Second, as with all my models, I have WAY too many models waiting to be painted to waste time with highlights. So, as a whole, my army really doesn’t pop much beyond a few drybrushed areas–a problem with everything I paint. Mostly it is just that they still look nice, and painting them this way goes so much faster than painstakingly layering on a bunch of highlights (that and I hate the look of brush strokes up close).

Forgeworld Fattie and a Handful of Flies

I still had more of the start collecting set to do, but, high on my Nurgle painting priority list was the Forge World [Exalted] Great Unclean One. I don’t remember when I first saw this model years ago, but, to this day, I still think it is the single coolest looking model Games Workshop has ever released:

Something about that laid back “diseased Buddha” pose along with that perfectly sculpted evil grin to end all evil grins just sells this model like nothing else in GW’s range (it is definitely far better than the new Saggy Baggy Elephant Great Unclean ones).

This model also gave me a chance to up my basing game by really building up a massive sculpted foil/plaster/rock/clay cat litter base for this beast to sit on. This new basing confidence allowed me to come up with some nice raised rock formation bases for the other big part of the Nurgle Start Collecting Set, the Plague Drones:

The flight stands were a little too short for the way I glued the legs on these models, so the rock formations (that I sculpted out of Polymer clay) actually served a purpose beyond just looking kind of cool.

The leader had the shortest flight stand, so he got the tallest rock:

For the bodies on these I just did a light Carroburg Crimson wash over a Kislev Flesh basecoat:

And for the wings I dry-brushed an Ushabti Bone Gradient from the tips out, with Nihilakh Oxide accents in the recesses:

All in all, I loved how these turned out as the pale pink skin contrasts nicely with the Dryad Bark chitinous bits.

Now, while the Forgeworld Great Unclean One is the quintessential GRIM-DARK™ Warhammer model, Horticulous Slimux is a better representation of the kind of stuff GW is making now (GRIN-dark?) I won’t try to describe a giant zombie with a pair of garden shears riding a huge toothy snail, see for yourself how ridiculous he looks:

I don’t even really mean ridiculous-bad, my first impression might have been “ok, this is just a little silly,” but after spending some time painting him up I definitely ended up loving this detail filled model. After all, like black metal, a game as grim dark as Warhammer IS a little silly, and, as it turns out, leaning in (a bit) actually kind of works (unlike in black metal, which kind of depends on a complete lack of a sense of humor about its own ridiculousness).

This model, like the Plague Drones shows me continuing to add contrast to my paint schemes. You really don’t have to get too complicated, here my main idea was to alternate dark and light sections of the model. So I put a very light Zandri Dust Tree on top of a dark Druchii Violet washed Dryad Bark shell, on top of a nice bright Ungor Flesh body. I dry brushed some highlights on the shell with Lucius Lilac (and added some color with Nihilakh Oxide in the recesses) and then covered most of the ground and the snail body with plenty of Nurgle’s Rot technical slime. The basic idea is to have lots of lighter areas in your color scheme to stand out from your darks.

The rules for Horticulous Slimux boost Beasts of Nurgle, unfortunately, when he was released there were only old metal Beasts of Nurgle models available that didn’t look that great and were super expensive. Thus I grabbed some Reaper Bones Filth Beasts for a couple bucks and heavily modded them to make my own proxies:

Of course, a few weeks after I finished them, GW released brand new Beast of Nurgle models that fit Horticulous Slimux’s “grin-dark” aesthetic perfectly. Since the new Beasts were on a much larger base (and looked really cool, I scrapped my proxies and went ahead and painted up 3 of them):

Here I continue to BOLDLY push my color pallet beyond the greens and browns I’m most comfortable with as I added brightly colored Fulgrim Pink and Xereus Purple tentacles to their Ungor Flesh bodies.

The problem with the new beasts is that they are pretty expensive ($40 each! …assuming you pay full retail for non-bootleg models). However, after looking at all the extra heads, hands and bellies the kit comes with, I busted out my blue stuff (a silicon type material you can make molds with) and made my own molds of the missing body parts:

Thus allowing myself to make 3 models from one kit:

I had to get creative with a few pieces, including making a mold of the top of the Nurgle Tree model in order to create a tentacle mohawk for the 3rd Beast:

The nice thing about Nurgle is that there are so many boils, sores, and other plague-born lacerations that they are perfect models to make molds for. Once painted up you really can’t even tell they are not “real” models. Here’s a fully legit Beast:

Here’s one that is half homemade-molds:

And here’s on that only has a legit belly and face:

It was a bit of extra work, but half the fun of this hobby IS the hobbying, so not only did it save me some money, but it also gave me a cool fun project to work on.

The last thing I needed for Horticulous (and a Nurgle army in general) was the quite yonic Feculant Gnarlmaw, a model I’d been avoiding painting for a bit due to the massive amount of detail for “just” a terrain piece:

I stuck with my Beast of Nurgle colors for most of it as the tentacles matched, and it ended up being a really striking piece. Now I just need to paint up about 4 more of these since Nurgle can make a new one grow out of the battlefield just about every turn. I’ve got a few ideas for using molds to make extras of these without breaking the bank, but that will have to wait for a later post.

Nurgle has always been a little silly I suppose, primarily when it comes to the Nurglings, little miniature demons that, based on their poses, love nothing more than showing their whole asses and vomiting profusely.

The Nurgling horde model is super cool, using three vertical layers of stacked Nurglings to make a giant mound of cute little demons ready to attack with their tiny teeth and claws to underwhelming effect:

They were kind of a hassle to paint, but not as bad as they look since I painted them unglued first. I plan on using my host of extra individual Nurgling Models to make a bunch more of these units, but that’s a project for another day.

The Nurgle Leaders all have a little Nurgling pet as you can see on this Poxbringer’s shoulder:

And as you can see greedily devouring this even sillier Spoilpox Scrivener’s carefully written battle tallies:

These leaders were all painted like Plaguebearers, but I tried to add more accents of color to each successive leader I painted…who knows, some day I might end up doing a model without a single earth-tone or green hue to be seen!

Up Next: An Underworld Undertaking

That’s all the Nurgle for now, but I’m sure I’ll be back with more soon. I’m halfway through painting up a massive Forge World Tamurkhan, I’ve got 10 Blight Kings primed and ready to go, and I still need to kitbash together a bunch more Feculant Gnarlmaws…and those are just the projects immediately on deck…my Nurgle project list is quite extensive to say the least.

But before I share any of those projects, I’ll return with the stuff I’ve painted up for the excellent Warhammer: Underworlds standalone game!