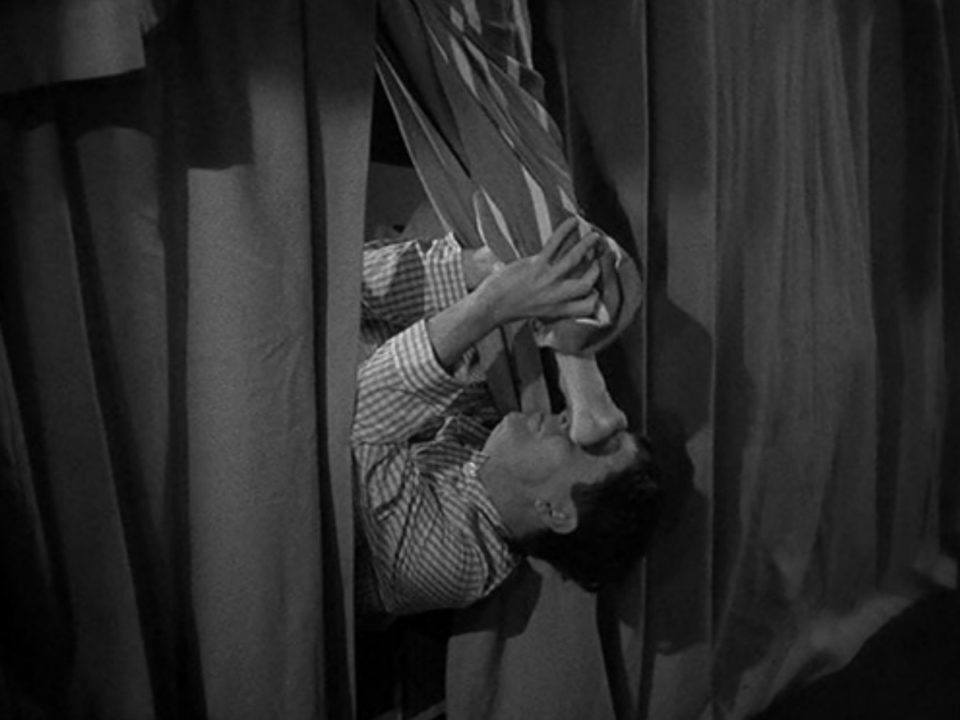 Few directors dominated the early 1940s like Preston Sturges.  While not the first writer-director, Sturges was the most famous early example of a screenwriter who also directed his own films, paving the way for Orson Welles, John Huston and many other.  His impressive run of back to back screwball comedy masterpieces, 5 perfect films from 1941’s The Lady Eve to 1944’s Hail the Conquering Hero marked him as one the most prolific and brilliant talents of wartime Hollywood.  Today’s film, 1942’s The Palm Beach Story is an excellent example of Sturges working at the peak of his viciously witty powers.

It’s illuminating to begin this discussion of The Palm Beach Story with the film’s opening credit sequence.  Sturges was an innovator, always pushing the boundaries of narrative cinema–which is probably why he worked with screwball comedies so often as their madcap narrative structures offered the most opportunities for experimentation.  However, what he created for the credit sequence of The Palm Beach Story goes far beyond experimentation.   Sturges hides an entire film in the opening sequence before the movie even starts!   In a rush of frenetic images, the viewer is assaulted with a jumble of confusing images of a man and his fiance on their way to a wedding while their doubles attempt to switch places with them. It’s easy to write it off as nonsensical wackiness, at least until the end of the film in which a last minute revelation explains the open (or, at least it makes the beginning  slightly less opaque).

What I love about this intro, is the way it serves to recontextualize the entire film with the paradigm shifting revelation of the final scene.  You could easily leave off both the beginning and the end and still have a fine movie, but but keeping them you add many more layers to an already layered film.  It’s an impressive bit of film making, and one that I don’t know that I’ve seen used anywhere else.

Not that all this focusing on the credit sequence should suggest that it is the most interesting part of the movie, far from it.  The Palm Beach Story is the usual tale of hapless men and the barely virtuous women who run them through the wringer until love finally conquers all.  It’s a bit more cynical than your usual screwball comedy fare, but Colbert and McCrea have great chemistry, especially in the second half as they realize that being with each other is vastly preferable to anyone else.

The supporting characters, as you would expect with Sturges, are great too.  From that quintessential Sturges creation, “The Weenie King,” to the appearance of the rest of the Sturges stock crew in the “Ale and Quail” club scenes on the train (which I thought were hilarious despite some feeling they are unnecessary), the supporting cast sparkles.  This is to say nothing of Mary Astor (in a possible career best performance) and her ridiculous boy-toy Toto that steal every scene they show up in.

Bottom line, The Palm Beach Story shows the Hollywood machine firing on all cylinders.  It is a film that is ridiculous, hilarious and full of more witty lines of dialog than Woody Allen’s entire oeuvre.  And somehow, Sturges was able to give it the backbone of a believable love story to tie it all together!  The movie positively sparkles, and no amount of passing years seems to be able to change that.