The Age Old Question: “Who wins, astronauts or cavemen?” 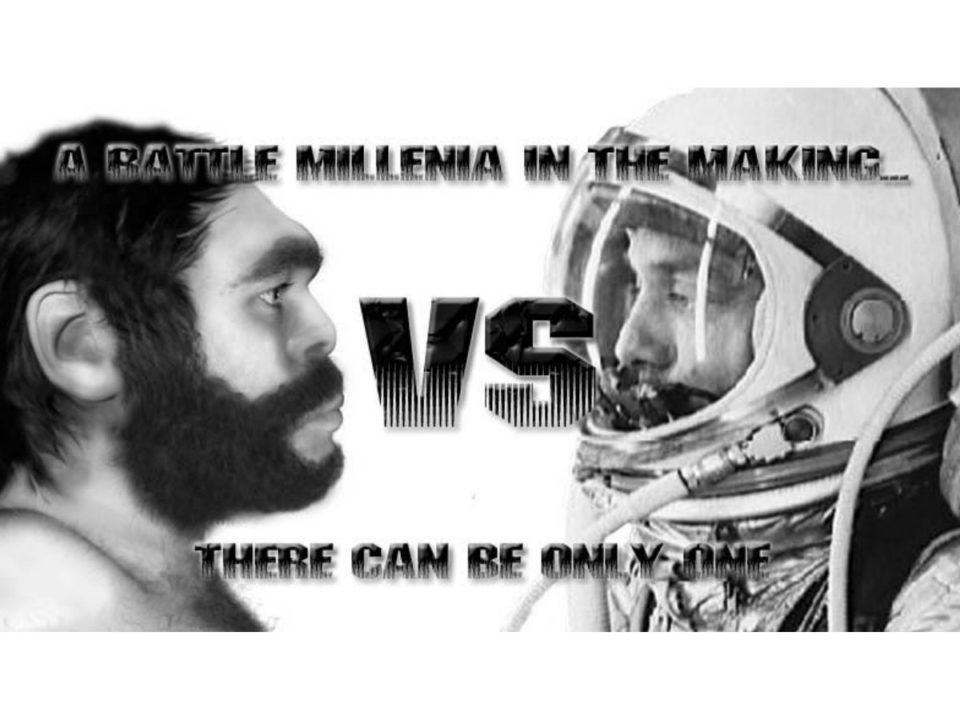 The question of “who wins in a fight, astronauts or cavemen?” has plagued the great minds of the twentieth century since the very first manned spaceflight. And indeed, who hasn’t wondered what would happen should the astronauts encounter some kind of space time rip on reentry only to find themselves stranded on prehistoric earth. All too often however, this age old debate is rife with misunderstandings and poorly documented research. The aim of this humble post is to provide a basic groundwork for further discussion with an emphasis on debunking some of the most common misconceptions that plague so many astronaut vs. caveman arguments.

Let’s begin with a more focused look at “cavemen”. The usual image of a “caveman” is of a knuckle-dragging, fur-wearing, club-carrying, bestial-looking subhuman. Aside from the knuckle dragging (early man had been walking upright since the Australopithecine stage) the most fitting example of this type of pre human would probably be the Neanderthal (Brace, 59, 79-80). Neanderthals could be found in large sections of Eurasia around 30,000-100,000 years ago, and, while it is the subject of some debate, they were most likely ancestors of modern humans (at least early in their species’ timeline)(Clark, 31). I think it would be pretty acceptable to use Neanderthals for our “cavemen” in this thought experiment.

As for the astronauts, I should only clarify that we are talking about human occupants of manned spaceflights from the past 40 years or so. There are no ray guns or transporters just like the cavemen do not have dinosaur steeds or other such fantastic and anachronistic accouterments. So again, it is important to keep in mind that we are talking about ASTRONAUTS, not SPACEMEN.

With those brief starting points in place, let’s discuss the scenario. While such possibilities as the cavemen sneaking onto the astronaut’s landing shuttle to attack while in space are intriguing, I think the spirit of the exercise necessitates the spacemen landing on a prehistoric earth. This way we have a true meeting of two worlds with the cavemen in their natural habitat coming into contact with a space shuttle full of astronauts.

Before we move on to the actual fight itself, let’s take a look at equipment. Neanderthals were known to utilize stone “scrapers, points and knives” (Brace, 87). So in addition to clubs I think we could give the Neanderthals spears, axes and other stone weapons.

As for the astronauts, the space suit issue should not be factored into the equation. The astronaut would not wear their space suit unless they were preparing for a moon or space walk, and any armor benefits would be quickly negated by the immobilizing effect of even a modern 200+ pound space suit (Jones, 84).

Now, when it comes to the actual fight, the Neanderthals have the physical advantage hands down. Due to basic physiological differences and adaptations the Neanderthals were considered to have functioned even beyond the level of top Olympic athletes (Trinkaus, 417). While the astronauts are undoubtedly in good shape, the Neanderthals could probably literally tear their heads off. If you add in the stone weapons it seems like a one sided slaughter in the favor of the Neanderthals.

What must still be factored into the equation is the supposedly “superior” intellect of the astronauts. While the Neanderthal brain was larger than that of the modern man (Silverberg, 53), brain size does not necessarily correspond to mental ability (Clark, 115). So I think it would be fair to assume that most astronauts with over 50,000 years of evolution in the connections in their brains would be smarter than the average Neanderthal. Not to mention, of course, the fact that astronauts are of much higher intelligence than the average modern man (Hansen, 209). I should point out that I don’t think claims of better teamwork can really be applied to the astronauts since I’m guessing it took quite a bit of teamwork taking out a mammoth with a stone spear. And yes, of course cavemen routinely took out mammoths with spears (My Ass, 1).

The astronauts also came from a primarily military background since the main motivators for the space program were political and military in nature (Launius, 7). Indeed, in 1985, at the height of the cold war, there were more astronauts in space than any other year (Verger, 361). If (and this is largely conjecture) the astronauts knew “some shit” (boxing, wrestling) from their military training, it would go a long way to negating the strength difference. Though, while examples of fighting technique beating brute strength are not uncommon (Sudo vs. Butterbean, Minotauro vs. Sapp), realistically speaking the astronauts would probably need much more boxing/wrestling/etc training than they might have picked up in the air force to really take out a caveman.

The ship itself would be a wealth of potential weapons for the resourceful astronauts. Pressurized fire extinguishers, robotic arms, oxygen tanks, etc.  In fact, I believe that having access to all these items in addition to their location in the defendable high ground position of their ship would be enough to edge this fight the astronauts’ way.

Of course if the fight must be without the landing craft, then we could always go with a bail out crash landing scenario. The astronauts were trained with parachutes, ejection seats and desert survival after all (Hansen, 221). In this case I’d have to give the advantage to the cavemen. The astronauts would have no chance to regroup from a foe that is used to hunting much quicker animals over periods of days. And once the cavemen caught up to them it would quickly be curtains for the much weaker astronauts.

Oh, and as a final thing to think over, I would have to say that this kind of “determination” puts a few points on the astronaut’s side: diaper psycho.

heh, I strongly disagree. The fact of the matter is: most astronauts are old colonels or generals in the Air force, Navy or Marine Corps. At that rank, they have received extensive hand to hand combat training; they know how to fight. Not to mention being an astronaut requires you to be in incredible shape!