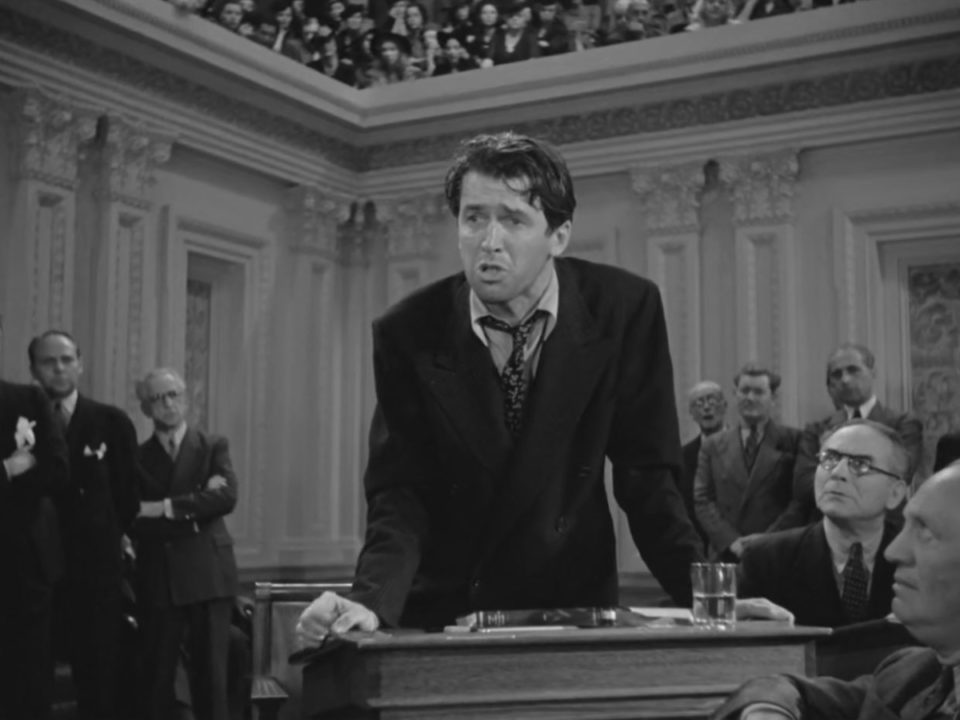 Frank Capra, for all his talents, is a problematic director.  He has directed some of my all-time favorite films, and yet he has also some of my all-time most hated films–and often the differences between the two are shockingly minimal.  Today’s film pushes his sentimental sermonizing about as far as it can go, and yet, against all odds, emerges a genuinely affecting, inspiring, and all around phenomenal work of cinema.  Much of the credit should go to James Stewart’s (a far better actor than the wooden Gary Cooper who almost got the role) powerhouse performance, but, I think the real secret of this film’s success is that it touches upon something almost mythic with its American Way™ fervor.

Mr. Smith Goes to Washington‘s story of an honest man who fights the system…and wins…is pure fantasy.  The portrait of America as a festering hotbed of corrupt politicians hawking the American dream to line the pockets of the oligarchs they serve is undoubtedly true, but the idea that any one man could stand against that much wealth and power–and win–is, frankly, ridiculous.  The titular Mr. Smith faces down the same insurmountable odds that have stared back at every fantasy hero from Frodo Baggins to Perseus.  However, it is because of these legendary stakes that Capra’s penchant for “laying it on thick” actually works remarkably well in Mr. Smith Goes to Washington.

When you view the film as the same kind of allegory as the classical Hollywood western, a different message emerges.  The film is no longer a simplistic parable cramming a message down your throat: “what’s that, being honest, pure of heart, and strong of will is…good?”  Instead it puts the entire pantheon of American myth and legend upon the shoulders of Mr. Smith.  He is the legendary Wyatt Earp (as opposed to the real man who bears little resemblance to his mythic counterpart) taking up arms against the Clanton gang of the senate.  He is Louis and Clark, forging ahead into the dangerous wilderness of Washington, taming the new land by pure force of will.  When telling stories such as this, dramatic montages of children getting clubbed down in the streets and dramatic gestures like “the filibuster” get a pass.

That is one of the delights of the realm of myth and legend–there are no grey areas, only good and evil.  It is a simple, naive realm to be sure, but it is one that taps into something deep within the human spirit.  The viewer of Mr. Smith Goes to Washington is witness to that same primeval clash of good and evil that is the basis for all successful mythologies.  And, as I’ve discussed before, for such a young country, America has a shockingly well-developed mythological foundation.  So maybe that’s why I love this film so much, and yet utterly despise Capra’s You Can’t Take it With You (also starring Stewart and Arthur) from the previous year.  Mr. Smith Goes to Washington is the story of forces beyond the realms of men doing battle for the fate of goodness and honesty.   You Can’t Take it With You is some asshole telling you to quit your job and just, like, be happy and stuff.