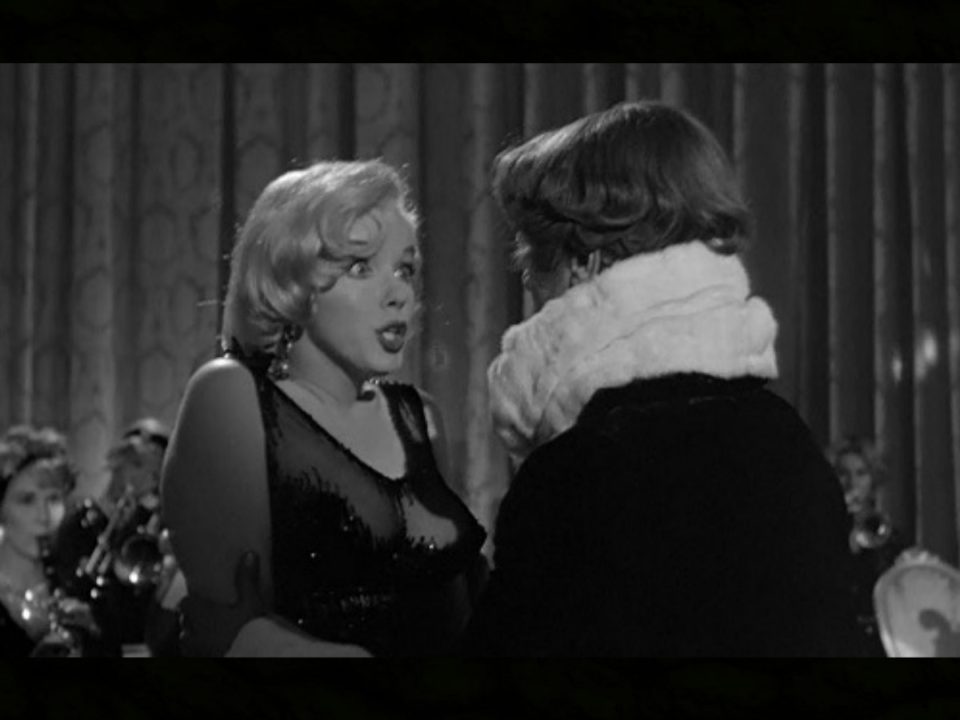 Most of Marilyn Monroe’s films rank quit high on my list of favorite movies, but if I had to pick just one, I suppose it would have to be Some Like it Hot.  Sure, the leads here are basically just another Hope and Crosby “Doofus and the Dick” team–a combo that was always a bit too mean-spirited for me to enjoy completely without reservations.  Of course, the real reason I’m writing about this film today is all Monroe. Even pregnant, overweight, and (by most accounts) a total mess on set, I can’t imagine anyone could watch this film and not find themselves completely mesmerized by Monroe for every single second she spends on screen.

It would be easy to assume the explanation for Monroe’s towering screen presence is simply her beauty.  And, while that is surely part of it, that is far from the whole story.  The world is full of pretty faces, I daresay even some that are prettier than Marilyn Monroe.  However, what so many people seem to forget after hearing the stories of how it took Marilyn 50+ takes to deliver the line “Where’s the bourbon?” is the fact that the woman could act.  And not just act, she was so good she could mop the floor with anyone she shared the screen with.

Monroe had that indefinable je ne sais quoi that let the viewer completely believe in her performances.  Granted, her characters were all quite similar, even her more nuanced performances like in Bus Stop and The Misfits (or today’s film) didn’t stray too far from her standard “persona.” However, her wide eyed breathy innocence had a naturalism that I honestly do not think has been equaled in film either before or since.  Even the shitty films Monroe was in came alive when she was on screen (I’m looking at you There’s No Business Like Show Business).  Add this natural acting ability to her breathtakingly luminous beauty, and it’s small wonder that her screen presence was so hypnotizing.

Of course, none of this says much about what makes Some Like it Hot any better than the rest of her films. And, while the sparkling script is one of the funniest screenplays of all time, and while the great Billy Wilder was operating at the peak of his considerable directing powers, there is still the minor issue of Tony Curtis’ protagonist being a lying, mean-spirited piece of shit.

Though, maybe it helped that Billy Wilder was directing; no other director could so masterfully combine cynicism and romance without lessening the impact of either.  In a Wilder film, you could see human behavior at its worst, you could revel in the most base impulses of humanity and yet somehow love and romance didn’t seem so out of the question either.  And what is more nobly human than the optimistic pursuit of love despite all evidence suggesting that such a pursuit will only end in heartbreak or worse.  Wilder might have been a cynic, but he wasn’t a misanthrope.

Or maybe this is all Monroe’s presence making itself felt once again.  No matter how cynical a story she might find herself in, she was a woman who wore who she was on her sleeve.  She was never anything less than completely genuine and honest, and even if the man she ended up with was a bit of a lying scumbag, by learning the truth and accepting him on her own terms anyway, the viewer too finds a way to accept him.  Monroe somehow managed to make him, dare I say, a bit sympathetic through the sheer power of her performance.  And that is a compliment I can give few actors whose names are not John Wayne.

I think you could write a whole piece on Marlyn’s breasts in this movie. They were pretty spectacular, too! She is absolutely riveting on screen.

I was going to say you need to keep your eyes on the road…but I guess I did make sure to get a screenshot of her in my favorite dress from the movie..