The Special Charm of Thrash and Death Metal 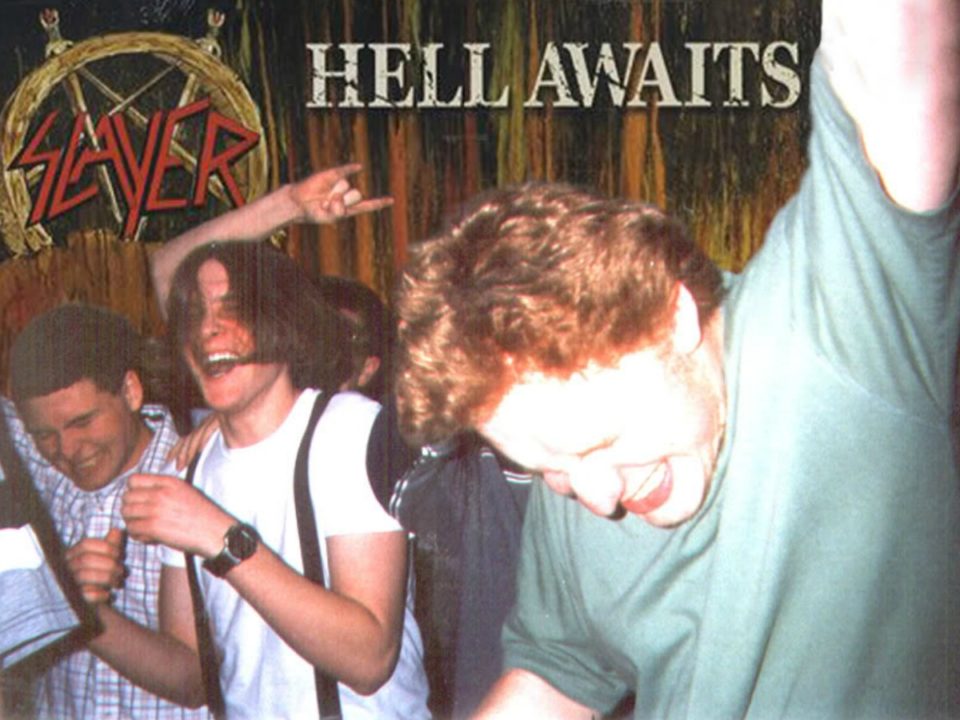 Underground metal is right up there with hardcore gangsta rap and the works of Montgomery Gentry in terms of cringe-worthy offensiveness. Underground/exteme metal is a broad term, I’ll specifically be looking at Thrash and Death Metal (Black Metal is a special case that will be dealt with in part two of this post), some of the more extreme forms of metal from the early 80’s and 90s in this post. Lyrically and aurally there are few uglier forms of conventional music so I thought I’d take a look at the question “why in the world would anyone listen to that stuff?”

As every heavy metal documentary ever will tell you, “it’s all about the energy” and “it really helps to get your aggression out!” Well, metalheads are an even more offensive lot than the music they listen to (trust me…I’ve been to their Mecca, Milwaukee Metal Fest…3 times) so in an effort to distance myself from “my people”, I figured I’d see if I couldn’t come up with something a bit different than the usual responses.

Now, maybe I don’t have a lot of natural aggression, but I am not sure if aggressive music really acts as an outlet for aggression. I mean, it’s tough to listen to Slayer’s Angel of Death without feeling like kicking *someone’s* ass. I’d say Simon and Garfunkel’s Feeling Groovy is probably a better bet if you are looking to calm down. But the visceral, head banging, face smashing brutality that is the backbone of most extreme metal songs has an undeniable charm. And also explains its appeal to young, disaffected males. It appeals to everyone’s inner caveman, to humanity’s repressed violent urges, to the pure adrenalin thrill of rebelling against all societal behavior conventions with wild abandon. So actually, there might be something to the “it really helps to get your aggression out!” argument after all. If the urge to act upon your more primitive, animal instincts is there, then maybe extreme metal IS a good outlet if it gives you the feeling of acting upon those instincts rather than actually going out and putting fist to face.

So maybe I have more in common with your typical metal fan than I might like to admit. I’ve cut my hair, hung up my leather jacket and put the spikes away, but even at 28, I found myself listening to Slayer’s Live Undead straight through twice because damn if it wasn’t like a legal form of crystal meth.

All this so far has dealt with what extreme metal sounds like, but the lyrics and presentation of the albums/band members are parts of the package too. Not every band uses exclusively offensive lyrics as every teenager who still thinks that Metallica writes some “real deep lyrics” on the nature of war in Disposable Heroes and that Megadeth’s In my Darkest Hour’s lyrics are a heartfelt meditation on breaking up will tell you (both good songs nonetheless…and I’m probably being too hard on the lyrics). Still a large number of Thrash lyrics and almost all Death Metal lyrics are exclusively Satanic, gore obsessed hymns to destruction and violence.

Now, I’ve always felt that art should be viewed in a vacuum and it seems silly to let the ideological beliefs of the artist either add to or detract from my enjoyment of their work. It’s the old Wagner argument; the dude hated Jews, should an opera fan let that prevent them from enjoying some of the greatest operatic works ever written? I’m not saying my way is right, every one should answer that question their own way, it’s just the way I view these things.

Of course, the lyrics aren’t meant to offend me, they are meant to offend “the man”, “society”, “the others”. Nothing says establishment more than organized religion, so when Profanatica screams “I vomit on god’s child!” at the beginning of Weeping in Heaven or Beherit screams “Ave Satan, Ave Lucifer” at the end of Gate of Nanna, they attempt to conjure up the most blindingly offensive images they can. It’s the juvenile kind of satisfaction that is derived from whipping the most uptight authority figure you can find into a blind rage with your words.

Obviously none of the hundreds of extreme metal bands actually believe in an entity known as Satan, but he is the most convenient mascot a music such as theirs can adopt. Deicide band members might have made a suicide pact while their lead singer burned an upside down cross into his forehead. But yes, even they are just militant atheists (and, as it happens, all still alive well past 33 years old).

Satan isn’t just a convenient object of rebellious attention though; Satan also symbolically stands for anger, hate, lust, excess and a Faustian will to power; all elements that fit the brutal nature of the music quite well. The disgusting album covers, menacing posturing from the band members and either incredibly gory or over the top Satanic (or both) lyrics from the bands all contribute to the visceral brutality of the music.

Basically the music is all around ugly (my first listen through of Morbid Angel’s Altars of Madness sounded like white noise to my “unrefined” ears–I now realize it is one of the masterpieces of the genre of course!) But there is a power, and at least in the early bands a real artistry and creative experimentation with a new art form. The pounding energy of the music is actually matched quite well by the lyrical excess no matter how silly the lyrics really are (and trust me, I couldn’t name a lot of wordsmiths among extreme metal lyric writers). Not that anyone can really figure out what the hell those guys are screaming anyway (I suspect a lot of them don’t even pronounce the lyrics they write…I’m looking at you Lord Worm).

So despite extreme metal being one of the musical styles with the least lyrical importance, pretty much every 15 year old headbanging his way through Slayer’s Altar of Sacrifice has to admit “learn the sacred words of praise hail SATAN!” has a certain ring to it within the context of that song. Surely even the most lyrically offendable person has to admit that “Enter to the realm of KITTENS!” would just kind of kill the whole song.

That finishes my blog post for “Why I listen to Thrash and Death metal despite everything about those styles of music sounding so awful and why my reasons for liking them are so much different than the disaffected male teens that make up the majority of the fanbase, but as it turns out my reasons are the same!” Tune in tomorrow why I briefly discuss what makes Black Metal so special it deserves its own blog post in part TWO! Until then…bust some Slayer out…you’ll be glad you did: