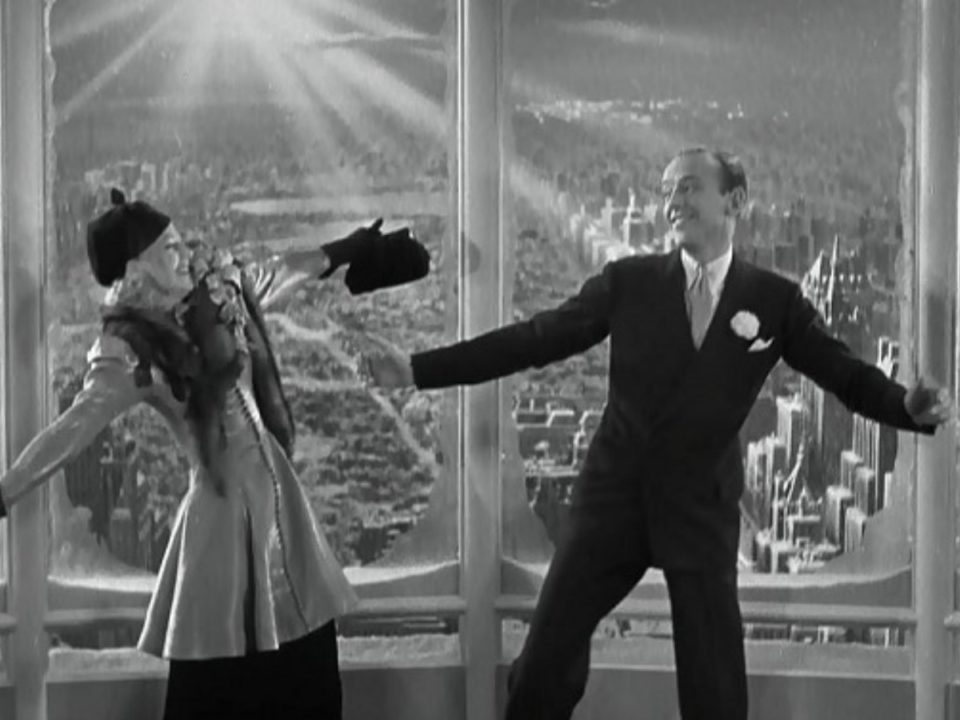 To start, I’ll say that I’ve never liked musicals. I really hadn’t seen any of the “classics” (aside from Westside Story in junior high), but pretty much whenever anyone breaks into song and dance I start counting the minutes until it is over (except for a few exceptions…the song in Rio Bravo is just fine). Hell, I didn’t even much like Woody Allen’s Everyone Says I Love You, and I love Woody Allen.  And don’t get me started on Bollywood (something I loathe almost as much as ska music).So why did I like Swing Time so much? I will admit that the dancing is absolutely amazing, Fred and Ginger look like they were born dancing with each other, and the songs are fine too. But I don’t think that is what makes a good musical.

To me (and this should by no means be set in stone for musicals) it takes a special kind of movie to be able to incorporate singing and dancing seamlessly. If people are going to randomly break into song and dance, the movie (“in-between parts”) should be similarly unrealistic. I’m not saying that there can’t be realistic dialog or anything like that, just there needs to be that “air of fantasy”, that special something that you just don’t see in “real movies”.

For instance, while watching Swing Time, all the elements of a traditional movie plot are there (guy and girl fight, guy likes girl, guy doesn’t know what to do about his engagement, girl realizes she likes guy, they figure it out), but they are played out with an invulnerable lightness. No one is ever REALLY worried about anything–or perhaps I should say that the viewer is never really worried about anything. The “in-between parts” are just as unrealistic as the dance numbers, but (and perhaps this is the trick) they seem to be realistic while you are watching them. It is only in the back of your mind that you realize you have been drawn into a fantasy land where everything turns out OK, where every character gets theirs (good or bad), and if people want to start singing and dancing that is just as natural as if they want to start talking over dinner.

Again, I am by no means a “musical” expert, this was just the first one I watched where I looked forward to the dance numbers and “in-between parts” equally. This post is an attempt to work out why. This could also only apply to these 1930’s musicals, maybe I still won’t like Westside Story or even those Busby Berkley ones…I don’t know. I will definitely be checking them out though, because this is a little corner of cinema that definitely merits some more exploration from myself. I think I would have stumbled across this sooner with the Marx Brothers had their in-between parts not been so great that they completely outshone the musical numbers, and had most of the musical performers not been so insipid and obviously tacked on.

All this musical theorizing aside, Fred and Ginger definitely have “charisma” (or in Ginger’s case “charisma” AND “hotness”), the story, while simple and completely unbelievable in parts (the way one character acts in the end is the most unbelievable thing I’ve ever seen in movies…and yet it worked in this one!) still kept me engrossed, and the comic relief was even deserving of its place. And the very last shot! In a high rise window looking over a studio set of a great city while the sun’s rays burst through the clouds…absolute perfection!

To check out the other films in the “My Favorite Movies” series, just click the link below:

The Wages of Fear