Quentin Tarantino, if you don’t have anything to say, don’t take so long to say it. 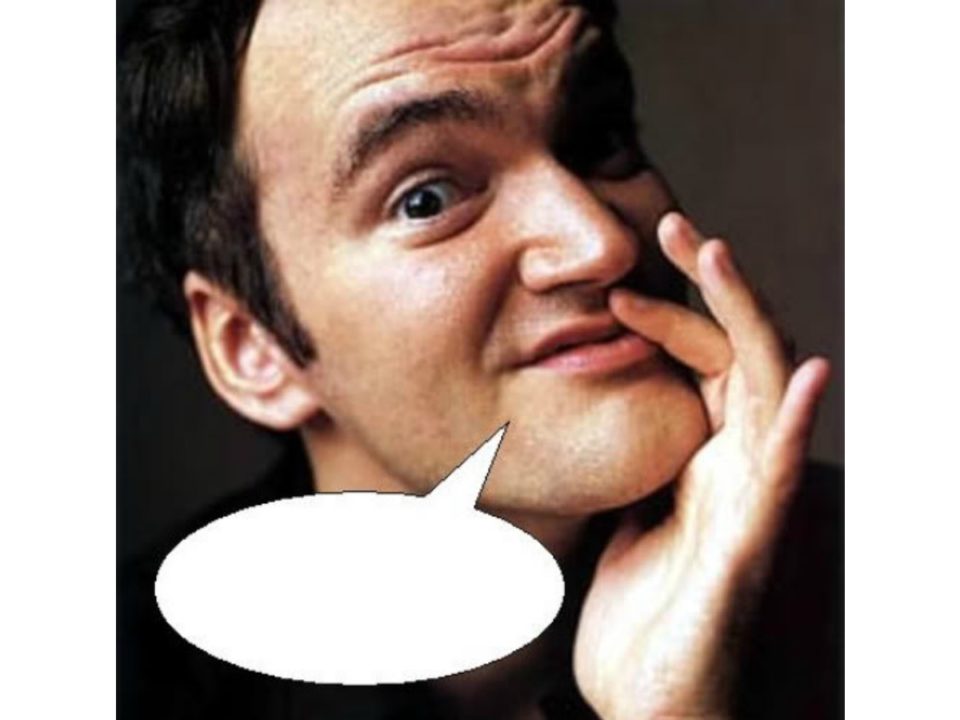 I’ve had issues with “cute” dialog in movies for a while.  I almost turned off Juno after ten minutes and even the dialog from someone like Oscar Wilde can begin to annoy me.  So I have some possibly unfair prejudices in this area (Juno-trashing might be acceptable, but I suppose there isn’t anything wrong with enjoying Wilde’s witheringly witty wordplay).  Still, when a film is full of dialog that serves no purpose other than to “sound cool” I tend to have some issues with it.  And since Quentin Tarantino is currently getting  my cinematic dander up with his dialog I thought I’d write a bit about the thin line between clever and insipid when it comes to film dialog.

Dialog in film is not really bound by hard and fast rules.  It is most commonly used to either advance the plot or tell the viewer something about the characters.  But, even ignoring more abstract uses of dialog in non narrative films (since my criticisms today are primarily about Quentin Tarantino, a decidedly narrative director), there is more to it than that.  The dialog of a film like His Girl Friday (which had a script twice the length of the average script for a film of its runtime) is full of lines whose sole function is to provide comedy (though they were seamlessly integrated into the skeleton of the screenplay) to name just one case of excellent dialog that is extraneous to plot and character development.

So I understand that dialog can have a more than utilitarian purpose.  Still, even if you are trying to do some kind of avante garde Brechtian thing with your screenplay, the dialog should still fit within the framework of your film.  Something like David Lynch’s Inland Empire with its sections of seemingly nonsensical dialog (though it is only a “narrative” film in the loosest sense of the word) works because it follows its own dream logic rules with regards to the screenplay.  Thus, if dialog is to be bound by one rule, it is that it must have some specific purpose (no matter how abstract) bound within the framework of your film.

So what purpose does Quentin Tarantino’s dialogue serve?  It does not tell us much more about his characters since they often all seem to speak about the same hip pop culture ephemera, and the things they say are usually easily interchangeable.  If Tarantino’s dialog does little to advance characterization, it does even less to further the plot as the conversations between his characters are usually extraneous to the narrative.  Granted, entertaining things are said, the “would you give a man a foot massage?”/”fuck you” was pretty good in Pulp Fiction.  And I’ve already admitted that simply writing a funny lines is fine, so what is the problem?

I think part of the issue is that when the characters in other movies like, for instance, High Fidelity (which I thought was pretty good) have a discussion about pop culture, it works because it is in a movie about pop culture (music in this case) obsessed snobs.  So not only is the dialog mostly witty, it also fits.  Yet when the two hit men in Pulp Fiction discuss what you call quarter pounders in France their dialog has no place within the larger framework of the film other than to set up the (again, amusing) line “I don’t know, I didn’t go to Burger King”.

I’ve been using examples of dialog from Pulp Fiction, but I actually don’t mind Pulp Fiction too much.  It is full of dispensable dialog, but not only is it mostly witty, it is also mercifully short and does a decent job of breaking up the pace of a movie that needs a few quiet moments between everything that is going on.  The old Hollywood masters knew how to pace a movie without just inserting nonessential dialog, but on the list of film no-nos I suppose that is a fairly minor one if such nonessential dialogue is at least clever (which Tarantino’s usually is).  At the end of the day Pulp Fiction is still pretty damn entertaining no matter what its characters say as it barrels ahead through all of its plot points.

Unfortunately, with Kill Bill 2, Deathproof and Inglourious Basterds, Tarantino’s films have become less wild entertainment punctuated by superfluous dialog, but rather superfluous dialog punctuated by wild entertainment (or in the case of Kill Bill 1, simply superfluous entertainment).  The opening scene of Inglourious Basterds involves a Nazi officer interrogating a French farmer suspected of hiding Jews in his house.  On the surface there doesn’t appear to be anything wrong with the scene, sure they talk a lot about the quality of the farmer’s milk and pipe smoking, but it is a cat and mouse scene meant to build suspense so it doesn’t matter what is specifically said, but rather what is going on underneath the dialog.  But I suspect if you graph suspense over time (for individual scenes) you get some kind of bell curve and by making the opening scene last (for what seemed like) almost half an hour, much of the suspense that has built up has dissipated by the end.

So not only does it seem like Tarantino just writes interchangeable, hip dialogue just to hear himself talk, he often doesn’t know when to have his characters stop talking.  I don’t have a problem with talky movies, Eric Rohmer is my all time favorite director after all.  But when, in The Aviator’s Wife (for example), Rohmer  finishes the film with a single 40 minute conversation in a bedroom, he crams 10 times the insight of the entire Tarantino oeuvre into that one conversation.  When Tarantino puts a (what seemed like) 40 minute conversation (when they meet their contact in the basement of the bar) in Inglourious Basterds he crams it with a bit of suspense and cute dialog peppered with a lot of self serving references to how much he knows about film.  And honestly, listening to hipsters blather on about pop culture isn’t high on my list of favorite pastimes.