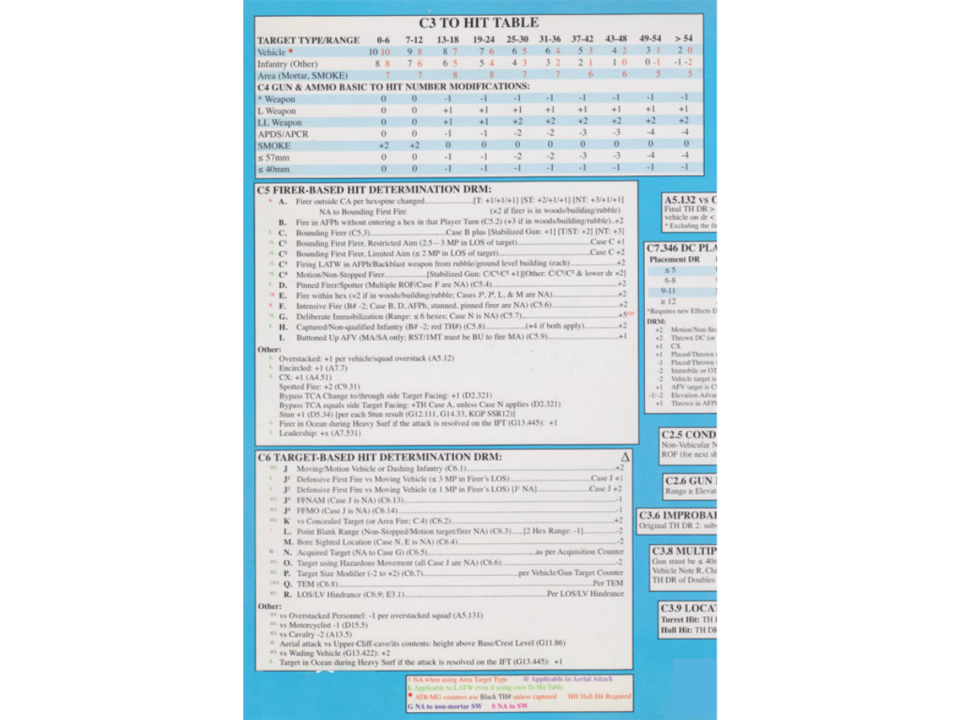 Today I’m proud to finally unveil a brand new direction for www.isleyunruh.com: I’m moving from weekly to daily postings!  It was always a problem of content rather than time (I can only write so much Lord of the Rings fan-fiction before I finally have to admit I’m who writes Lord of the Rings fan-fiction), but it finally dawned on me that I was sitting on a mountain of content with my trusty ASL rulebook.

It’s no secret that I love board games.  Eurogames, card games, Ameritrash, War Games, I play them all, but my all time favorite is ASL (Advanced Squad Leader), the premier squad level World War 2 gaming system.  To some, its 200+ page rulebook of small print acronym laden text can be a bit daunting, so I have decided to try out a new direction for this site and discuss a different aspect of the ASL rules each day for the next year.  Depending on reader response I may make it a permanent feature for many years to come!

Thus, my usual weekly Monday features will be put on hold (except for Middle Earth Monday, of course) until March 31st 2011, as I implement the following new daily features:

MPh Monday – Everything from Minimum Move, to Infantry Overrun, if it involves your squads hoofing it, it will be covered here!

WA Wednesday – Walls–why it’s worth the CX to get there first and get the Advantage.

TH# Thursday – Want To Hit that patrol boat with a mortar from a gutted factory as it travels down the Volga?  Learn how every Thursday!

FRD Friday – Harness the power of fractions to get a handle on your Dummy Minefield secret dr odds!

ST Saturday – Slow Traverse Turrets and how to the the most out of them.

sN Sunday – A special 52 part discussion of everyone’s favorite German AFV Close Defense Weapon System, the Nahverteidigungswaffe and if one is right for you.

I figured that a great way to begin TH# Thursday would be to just begin with Case A of the Firer-Based Hit Determination DRM for the To Hit table.  But since Case A will obviously be an integral part of my inaugural post for ST Saturday, I instead decided I’d start with the Target-Based Hit Determination DRM which, of course, start with Case J.  Since this is a weekly feature I should be able to finish up my discussion of the 44 special cases of both the Firer and Target Based Hit determination DRM sometime next February.  Which is to say, there is no time to lose, so let’s get started shall we?

The “Case J’s” all are all modifiers based on moving targets.  The first Case J is the most basic:

CASE J: MOVING/MOTION VEHICULAR TARGET: Ordnance firing at a Dashing target (A4.63), or at a vehicle which has entered a new hex or used VBM (D2.3) during that Player Turn, or is/was in Motion status.

The distinction that many people fail to miss about the first Case J is that we aren’t just talking about moving Vehicular Targets (despite the capitalized title), but also moving infantry targets provided they are using a Dash move (A4.63)  We’ll cover all the ins and outs of Dash moves on a future Mph Monday, but for now, you just need to keep in mind that:

For infantry, it is as simple as that.  If they are using a Dash move, you can still fire at them (provided they are within the firing weapon’s CA, gyrostabilizer or not) and must take the +2 Case J DRM.  Contrary to the dash rules, FFNAM/FFMO do not apply in this case. Otherwise, it doesn’t matter if the infantry is CXing, on skis or using Hazardous Movement, Case J only applies when they Dash.

For Vehicles it is a bit more complicated.  First one must understand that as far as the ASL rules are concerned, a Stopped Vehicle could still be considered as “in motion” with regards to determining a TH #.  Let’s take a look at the basic rule C 0.8 and try to get a handle on just what it takes to classify a vehicle as “in motion”:

Though it seems confusing that a stopped vehicle could still be a “moving target”, this is specifically what Chapter D, rule 2.13 says:

STOPPING: A vehicle must expend one additional MP in its current hex to stop movement, unless it is ending its MPh under a Motion counter (2.4). If it stops (e.g, to fire or to fake fire), it may begin to move again during that MPh if it has MP remaining, but must pay the Starting MP expenditure to do so. Even though stopped, the vehicle is considered a moving target if it entered a new hex/hexside during that Player Turn or began its MPh in Motion (c.8).

Basically the only time a Vehicle is not considered in Motion for the Case J DRM is if it starts the Mph Stopped and stays Stopped.  A Vehicle in the LOS of the Ordnance taking the shot will cause the shot to be subject to Case J even if it expended a Stop MP and the shot is taken during the DFPh!  The only way to avoid having the Case J penalty is to take your DFF shot during the MPh as a stopped vehicle expends a Startup MP. Other non-movement MP expenditures will not trigger Case J provided the vehicle was not in motion during the current Player Turn.

So there you have it, if you want to fire that 88 at dashing infantry or an in Motion AFV you better have some Acquisition or Bore Sighting because you will get an automatic +2 on the DR!

I’ll see you next week when I discuss Case J1, which, of course, covers those moving targets that are only briefly in your LOS.  Make sure you brush up on your Gun Duel Rules (C2.2401) as they are an important special case!  In case you are NRBH, here is the pertinent section so you can start studying now for next week:

2.2401 GUN DUELS: Vs a non-concealed, non-Aerial DEFENDER’s declared Defensive First Fire attack on it, a vehicle may attempt to Bounding First Fire (D3.3) its MA (/other-FP, including Passenger FP/SW) at that DEFENDER first, provided the vehicle need not change CA, is not conducting an OVR (07.1), its total Gun Duel DRM (i.e., its total Firer-Based [5.] and Acquisition [6.5] TH DRM for its potential shot) is < that of the DEFENDER, and the DEFENDER’s attack is not Reaction Fire (07.2). Neither the +1 DRM for a Gyrostabilizer nor the doubling of the lower dr for other ordnance in TH Case C4 (5.35) is included in the Gun Duel DRM calculation. The order of fire for non-ordnance/SW is determined as if it were ordnance [EXC: TH Case A can apply to non-ordnance/SW only if mounted-on/aboard a vehicle that is changing CA; all such non-turret-moUnled fire is considered NT for purposes of TH Case C, and A.5 applies to any type of FG]. If the ATTACKER’s and DEFENDER’s total Gun Duel DRM are equal, the lower Final TH (or non-ordnance IFT) DR fires first-and voids the opponent’s return shot by eliminating, breaking, stunning or shocking it. If those two Final DR are equal, both shots are resolved simultaneously. Any CA change the DEFENDER requires in order to shoot (5.11) is made before the ATTACKER’s shot if the DEFENDER’s total Gun Duel DRM is less than or equal to the ATTACKER’s; otherwise its CA changes (if still able to) after the ATTACKER’s shot. After the initial Gun Duel has been fully resolved, and if otherwise able and allowed to, that DEFENDER may announce another attack vs that ATTACKER who in turn may declare another Gun Duel; this time the printed ROF of one firing weapon on each side may be included as a negative DRM in that side’s Gun Duel DRM calculation. Only the ATTACKER may declare a Gun Duel [EXC: not if the DEFENDER has done so as per 5.33].

Wow. It took real commitment to type all that up! I don’t think you should *edit*

Though it took real commitment to discover I *edit*, that seems to be the consensus…so, *edited*

This is the best thing EVER. I am SO EXCITED for daily ASL posts! WOOOOOO!!!

Now THAT is the spirit!

I refuse to read this, but I’m sure it’s all very interesting, and you’ll quickly develop a new fanbase. I QUIT THIS BLOG FOREVER.

The sad thing is…I kind of want to write all those features, like, for realz.

I think in time you will grow to love MPh Mondays. Perhaps not as deeply as Mailbag Mondays, but in a more measured, sustainable way.

So let me get this straight – the distinction as to whether or not a dashing infantry takes the +2 Case J DRM or FFNAM/FFMO is whether or not they are under ordnance fire? It’s pretty obvious everyone was thinking it, but someone has to have the balls to ask these questions.

I was about to say this is not quite right, but I guess it basically is…

THOUGH, a dashing unit under infantry fire will take the -2 FFNAM/FFMO penalty, but will also gain the benefit of Area fire which, if you look at the IFT, is basically the equivalent of a +2. Meanwhile, a dashing unit under ordnance fire (as you pointed out) will not receive the -2 FFNAM/FFMO penalty, but is eligible for a +2 from Case J, thus, will be harder to hit with ordnance than infantry fire (which seems to make thematic sense since a dash is meant to represent running quickly across a street).

Of course, this will be covered again in TH# Thursday 4 and 5 (Cases J3 and J4), since the lack of a FFMO/FFNAM penalty to dashing infantry under ordnance fire is not as intuitive as the rest of the rules.

(Also, consider me impressed…now tell me what the Gun Duel rules mean…because I still haven’t worked my way through them!)

Ok, who is the asshole that left me this google search:

“does isley unruh wrongly use the word sight?”

You can’t just call everything a typo.

Ha! I don’t think so, buddy. It took me 20 minutes of reading-comprehension-fail just to formulate a question that you might take seriously. I can’t help but think there might be something wrong with a war game that’s more complicated than actual fucking war 😉

It wasn’t me, but I fully support whoever did it.

So you weren’t the one who also wrote: “does isley unruh not understand what a typo is?”