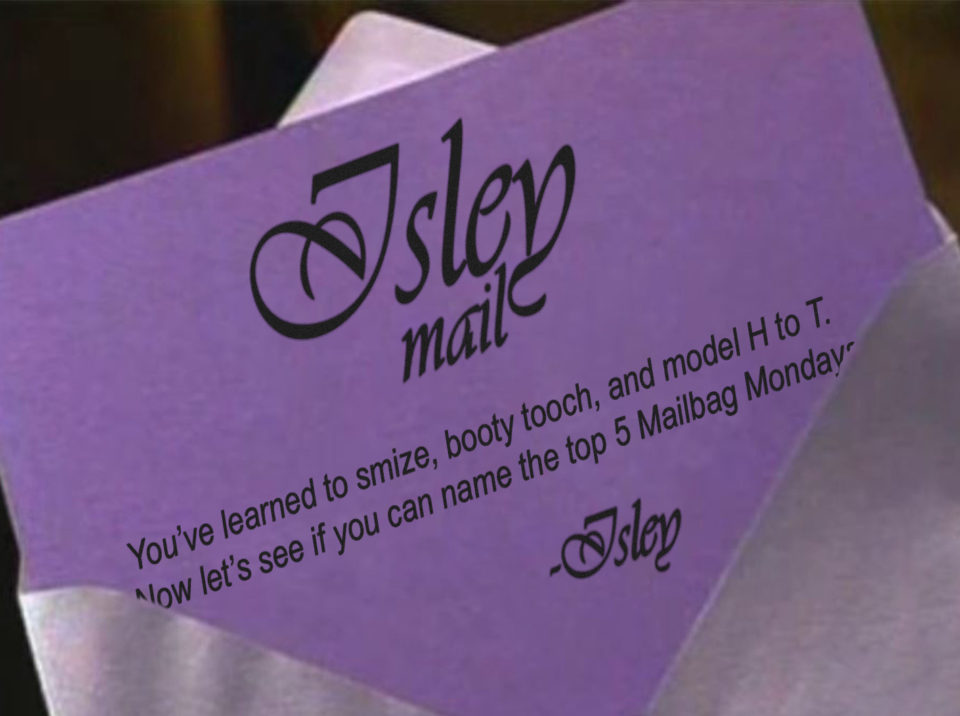 Mailbag Monday was the first “monthly” feature that I created on this website.  It started when I noticed that the google search terms that were leading people here were getting more and more ridiculous (I would never want to assume correlation implies causation, but the search terms did increase in frequency and vulgarity with each post I wrote about jocks shitting in boxes).  Thus I used these search terms as pretend “reader mail” and attempted to answer them directly in a kind of improvised humor feature that I hoped would help me shake up my writing a bit.  Largely it worked as I was able to give short, facetious answers to questions on everything from pancakes to, well, jocks shitting in boxes.  Of course, the drawback here was that the more I wrote about pancakes and jocks shitting in boxes, the more googles search terms I got for those subjects.  So, for the last 20 posts or so I switched over to adding in actual questions from my friends.

I’ve always enjoyed Mailbag Monday, and, despite the samey feel of some of my google searches, it has overall kept me thinking creatively more than most of my recurring features.  So, while it might not be on the FIRST Monday of each month, I will still definitely continue writing this feature from time to time (most likely with just a single question in each new installment).

With that bit of history (and a look to the future) out of the way, I thought I’d try to pull together 5 of my favorite installments of Mailbag Monday.  Because I answer 5 “question” each time, it’s hard to really say what the BEST Mailbag Mondays are, but these 5 have a nice combination of classic answers and overall quality across all answers:

Mailbag Monday started with quick throwaway jokes that were (sometimes) funny enough, but nothing to really write homes about.  With Mailbag Monday 12 (and a few installments leading up to it), the jokes were just as disposable, but the amount of work I put into them (drawing pictures, editing sound clips) gave the whole production just the little bit of extra oomph it needed to become by far the most popular feature on my site (Not that Middle-earth Monday was giving it a run for its money).

Fun Fact – This was not the first time, and was definitely not the last time that I mined the ASL rulebook for “humor” on this blog.  Also, I took that reverse #2 picture myself…I believe I used my nose to push the button.

An example of Mailbag Monday firmly in its classic phase.  By this point the google searches were just excuses for me to find stuff to share that might be of interest–like my old handmade “Black Manta” club card, a suspiciously sincere bit of Julia Stiles fan-art, and pointing out what everyone has always known about Bolt Thrower.  Solidly amusing content (though the “black metals jacket” bit was kind of phoned in), and just enough media to keep things from getting stale.

Fun Fact – That Dazed and Confused bit is a classic example of me getting a google search, and using it as a hazy seque to just post a picture of something only tangentially related that I found amusing.  Which, perhaps, is also what I mean by “phoning it in.”

An example of how using actual questions from my friends enabled me to take a slightly more serious tone on Mailbag Monday while still getting silly with the scatological humor.  This post was also notable for featuring the first use of my “Satanic More You Know” picture, a picture that I plan on reusing as much as possible in the days going forward.

Fun Fact – That buttwiping post has proven to be about the most controversial thing I’ve ever written…who knew so many people wipe their asses incorrectly, and can get so butthurt about it (no pun intended) when you inform them of this.

Opinions may differ, but this one might have made the list for its Lord of the Rings sharting fanfiction segment alone.  Add in 4 other solid to excellent supporting features and you’ve got a real winner.  Best of all, I even ragged on dubiously prolific neo-nazi band Tank Genocide so hard that one of that dude’s friends in France wrote me an unusually polite letter in defense of his buddy which was too amazing not to repost right here:

Hello,
I’ve just discovered your website, after some hours of random surfing, and it’s really nice. Nonetheless, I would to react -peacefully off course- to what you wrote about the (almost) legendary Razor and his main project Tank Genocide.
You’re completely right when you say that he doesn’t sell a lot – well, releasing dozens of, let’s say,raw recordings each year (month?) is not the best way to get rich, even though you have nice mother who buys each of them. But I’m not sure Razor is looking for that, he’s more into a kind of “underground credibility” (even if most people in the BM underground don’t take him seriously) and his NS involvement is not a pose: he’s just like that and does’nt see the point in separating his life from his “art”.
As for the music, things are a bit more complicated in my opinion. Razor has released a lot of things which are for most of them total shit for braindead people and he’s the first to recognize it. The idea is, when you take his whole discography to encompass the process and the result as well, it’s a kind of global approach (one could say I’m intellectualizing things much more than they deserve!).
One thing that’s fun with him is that, even with his overtly nazi past as a skinhead, and although he still has some strong opinions, he’s a nice father and husband, still releasing cassettes with horrible porn/NS covers and song titles like “Breivik was a hero” and so on. I also think he would be very pleased that there is someone in the US writing about him even in a funny way.
Anyway, greetings from France

Fun Fact – For the record, my mom has never actually sewn on any of my patches.  I might have phoned her for sewing machine advice though.

With my first Mailbag Monday with REAL questions, it quickly became obvious just how much better actual questions are than answering the same “silly black metal” google search “questions” every month.  Actual reader questions didn’t always mean a home run, I phoned it in plenty of times over the next 20 entries, but in this first entry I felt inspired even by the simple and nonsensical “questions” that I went with.  I still don’t know what Shena meant with that hairline question…

Fun Fact – I emailed all my friends politely requesting Mailbag Monday questions…Chaddyboy replied with 40 questions in a suspiciously short amount of time.  Thus, his questions were featured quite a bit over the next 20 installments.