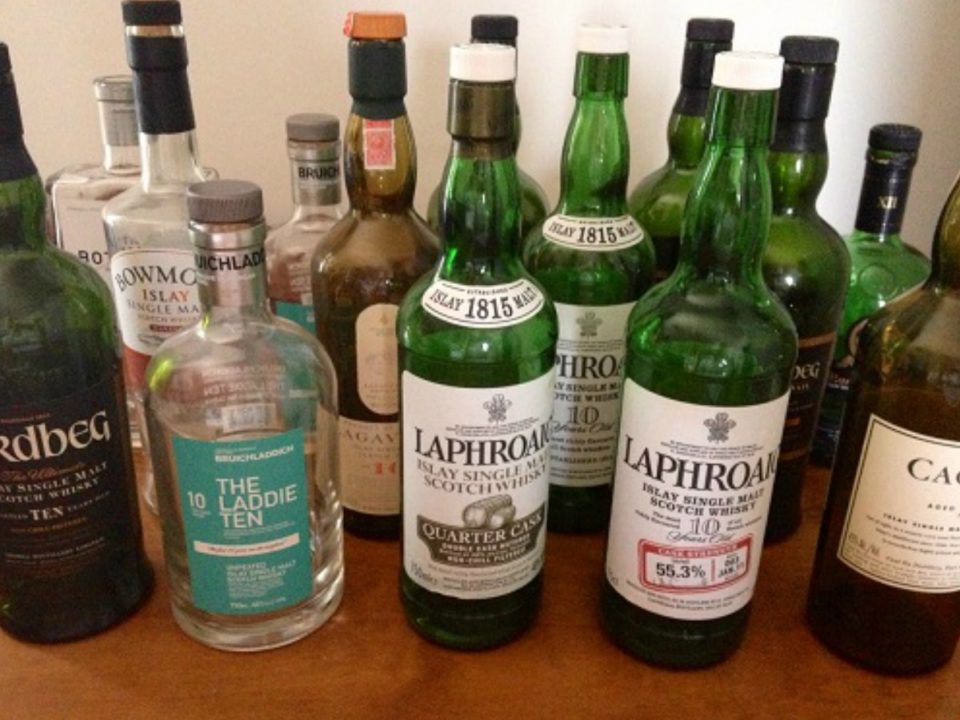 Today I’ll be looking at some of my all time favorite Scotch whisky from the Scottish island of Islay, the best of all Scottish whisky producing regions.

I’ve always been a beer guy/snob, but in recent years I discovered how brilliant single malt Scotch whisky can be.  Though the only two ingredients are water and malted barley, the range of flavors, smells and excreted esters is really pretty astounding.  Some Scotches taste like honey, some taste like grass and some taste like band-aids and rotten leaves mixed with swamp water in an old ashtray full of cigarette butts.  Guess which kind I’ve decided is my favorite??

The basic idea is that on the remote island of Islay (pronounced Eye-luh), fuel for fires was very scarce, so the old whisky producers on the island would cut bricks of peat moss out of the island’s bogs and burn that in order to dry out the malted barely before they made it into whisky.  Thus, the Islay Scotch became known as one of the most heavily peated of all Scotch whiskys, as the barely malt became infused with an overwhelmingly strong iodiney/peaty swamp water flavor.  And since I like anything that has an overwhelmingly strong flavor I was bound to become a big Islay whisky fan (not to mention the fact that the region has a great name).

Other Scotch producing regions, of course, make peated whisky (Springbank’s Longrow is a particular favorite of mine), but the real heavyweight producers of the style can be found on Islay, and thus, I will focus on Islay whisky for today’s IO5M list.

I have factored price into all of my picks today as well, partly because I haven’t tried much high dollar scotch, and partly because a single malt Scotch habit is already probably too expensive for me (expect to spend at LEAST $40 to get a decent bottle of any Scotch). Every pick from today’s list can be found for $40 to $50 if you look around.

There are 8 producing distilleries on Islay, and I’ve only picked bottlings from four of them for today’s post.  Here’s a quick word on the distilleries that didn’t make it to this list:

And now, with the losers out of the way, on to the list: 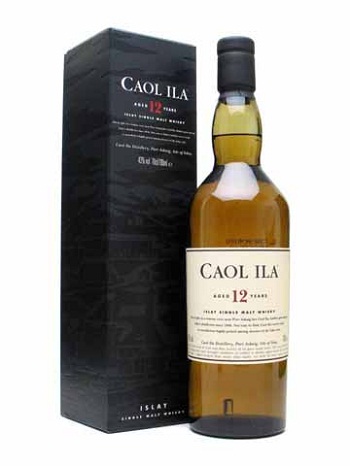 This is a great Lagavulin substitute for the price (~$50).  Very smokey, and with just an all around delicious flavor, a bottle of this is high on my list of bottles to re-purchase.  If it has a drawback, it’s not the most complex scotch on this list, and lacks a bit of Lagavulin’s peat bite, but it’s still a definite step up from Bowmore. 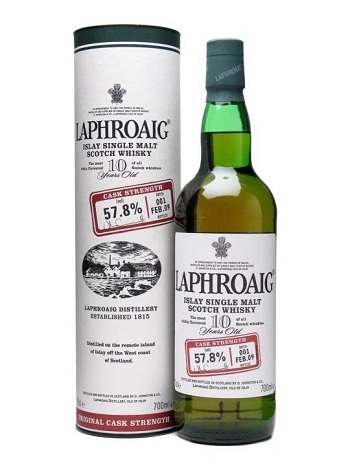 In theory this is just a more highly concentrated version of the standard 10 year old Laphroig (which is also great).  And yet it tastes completely different, an incredibly intense blast of campfire smoke and strong peat that will so overwhelm your taste buds you will almost get a bitter coffee taste to it.  At almost 60% abv, this will numb your tongue a bit and thus you will lose some flavor without a bit of water, but definitely give it a shot neat, it’s like nothing else you’ve ever had in your mouth. 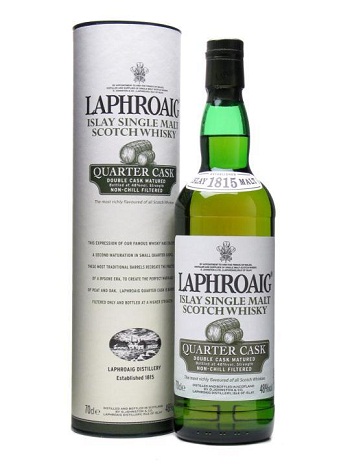 Laphroig markets itself as “the most richly flavored of all Scotch whisky” and they really aren’t kidding.  None of their bottlings are for the faint of heart. This is probably my favorite from them.  Though it doesn’t have an age statement (and is assumed to be only around 8 years old), using a cask a quarter of the size of a traditional cask puts much more of the scotch in contact with the wood and thus it actually tastes much more complex than it actually is.  It’s close, but it edges the regular 10 year old for me (and at around $50 is close on price), and has a lot more bite than the overpriced 18 year old. 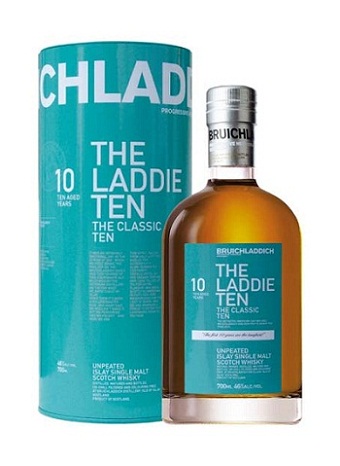 Bruichladdich was a distillery that had closed down and only recently reopened.  This is the first bottling that was aged 10 years from only their own new stock of malts and it is amazing!  Though it is completely unpeated, this is still a pretty intense malt (and, I still taste a bit of peat, probably from the water they used).  Salty, intense, and with an almost fruity edge to cut the seaweed flavors, this is an impressive malt and I look forward to seeing what they come out with in the future. 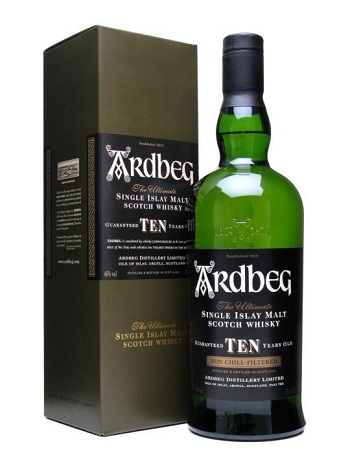 Ardbeg was another distillery that temporarily ceased production until fairly recently.  However, since they have reopened, they’ve produced many of the best peated whiskys out there.  While they get a lot of buzz for their 6-8 year old “no age statement” special cask strength bottlings like Uigeadial and Corryvreckan, those are usually overpriced (around $80) and honestly, not as good as their simple 10 year old base whisky.  As peaty as Laphroig, but without the unpolished edges, this is probably the one bottle I always want on hand and is as perfect as peated whisky can get.

Sure, even with this one, if you even open the bottle around company you can expect to see them gag and cover their noses while asking if someone broke wind, but, if you are worried about that kind of thing, then you really shouldn’t be drinking Islay whisky in the first place!

Oh man, but the Lagavulin 16 is SO good. I think the prices must be a bit higher in Kansas than they are in Virginia, because all of those seem more ridiculous than I remember. I haven’t seen the Bruichladdich, but I’ll have to keep my eyes peeled. I agree with Ardbeg, it’s definitely my favorite of the bunch. Caol Ila is my go-to, however, because it’s the best value.

I hate every Laphroig I’ve tried. I think you nailed it with your description of Ardbeg–Laphroig tends to be a much more unpleasant experience trying to hit the same notes as Ardbeg. It’s my advisor’s favorite scotch, though. He refers to it as “glorious frogs piss.”

We drink a LOT of scotch at the field station over the summer, because it’s so much more convenient than going on 2 hour beer runs every couple nights. At least that’s what we tell ourselves. Reflecting on this, it’s actually kind of unfortunate that people on grad student salaries have such expensive tastes in alcohol…

It’s also occurred to me that as I’ve gotten older I almost exclusively like things that are blindingly spicy or otherwise super strongly flavored. I wonder if I’ve just killed all my taste buds, and only have the capacity to taste the most peaty scotches?

Hey, awesome, I don’t think we’ve talked Scotch before have we?

Yeah, I got a bottle of the Lagavulin 16 in New York for $65, it’s a good $30 more here. I believe everything else on my list is maybe around $45 to $55 depending on what kind of deals you can find…are you finding it for less than that? (actually, I think Caol Ila is the most expensive of my 5 at around $60 in Kansas, but with a 10% discount it comes into line).

I’ve also had good luck online, if you can get enough people for an order (and find a place that ships to your state)…my most recent bottle of ardbeg was like $34 or something I think which was a total steal.

Heh, yeah, sometimes I like the unpolished edges of Laphroig: “glorious frogs piss” indeed! We quickly learned not to start our tastings with Laphroig…not if you want to taste anything else for the next two hours.

You tried any of the limited release Ardbegs?

Also what about non Islays? I’ve enjoyed Tobermoray for a bit of peat, Glenkinchie for a light honeyed one and that Longrow for a serious peated scotch.

Caol Ila is usually around $35 – $40 here. I have a couple of military friends here that seem to get great deals on base, which is nice.

I haven’t tried any of the limited release Ardbegs. In fact, I think I’ve really only tried the youngest of all of my favorite scotches.

I’ve actually only really experimented with Islays. I think this is a bias I’ve inherited from my lab. The only non-Islay whiskey I remember liking much is Talisker. There’s a restaurant here called “The Whiskey Jar” that sells whiskey flights. I really should use that as an opportunity to branch out more.

Next time I’m in town we should split a couple of non-Islay whiskeys!

Isley, why do you and this Brian guy keep spelling your name wrong?

I agree with Ardbeg at number 1, but completely disagree which one. Ardbeg Corry and the Oogie are vastly superior to the 10.

I could see an argument being made that they are better, though it’s tough to compare high 50% cask strength monsters to the regular 10 year. And I feel like when you add in the inflated price tag, the 10 is the better value…maybe…

Talisker is from the Isle of Skye not Islay. It does have similar characteristics though.

If you are going to be pedantic on random blog posts you find on google, at least try to read more carefully before you correct someone…

No love for Lagavulin?
WSS

I have tried it all more or less and the Ardbeg just doesn’t hold a candle to the Quarter Cask,Its dull in comparison. Laphroaig is the king for me. It puts the fire in and tastes like the cold sea.

Lagavulin 16 is fantastic and I think the best Islay classic out there. Lagavulin 12 is even more amazing, and Lag distillers is outstanding also. Ardbeg 10 is a great deal and a peat monster. Bowmore 12 is average and some say tame for a peat islays but a nice drink and good for those newer to the stronger islays. You have to love Laphroaig but 10 is a bit harsh, and Cask strength is better. I have not had it personally but I hear Laphroaig 18 is fantastic.

Ardbeg Corry for sure, but don’t sleep on Laphroaig Cask Strength…both have that medicine thing going. As for Bowmore, their “Darkest” is also nice and represents Islay (pronounced Eye-luh) well. Ardbeg Corry is all you really need…it’s very “chewy”!

We have all of your top 5 in our drinks cabinet, but if we might make a recommendation from here in the Scottish Borders…

Great King Street by Compass Box: A re-invigoration of the blended malt tradition. We love our Islay singles, but we think this one is great!

Yeah, who knows how much something would be in Kansas compared to Japan, but I’ll keep an eye out (even though Bowmore has traditionally disappointed me).

^^ This guy knows what he’s talking about!!

Oh, the day I could buy the laphroaig 30 without a second mortgage: mothers milk. Laga had long been my go to, but now I find a little to ‘dry’ vs ardbeg 10, particularly given price differential. I so miss the old still’s 17! So long gone here in the north east. Bruichladdich is doing some wonderful innovative stuff. All in all,Islay reigns supreme in the world of malt! Variety is the spice of life!

I’ve been experimenting with Islay scotch for a few weeks, decided to get the Ardbeg 10 on a whim. By far and away the most pleasant I’ve tasted between lagavulin 16 or laphroaig 10, close call against the Caol ila. Easy to drink and for sure a great gift…I would agree for the money and quality, you will be hard pressed to taste something as good at the $50 -$100 range.