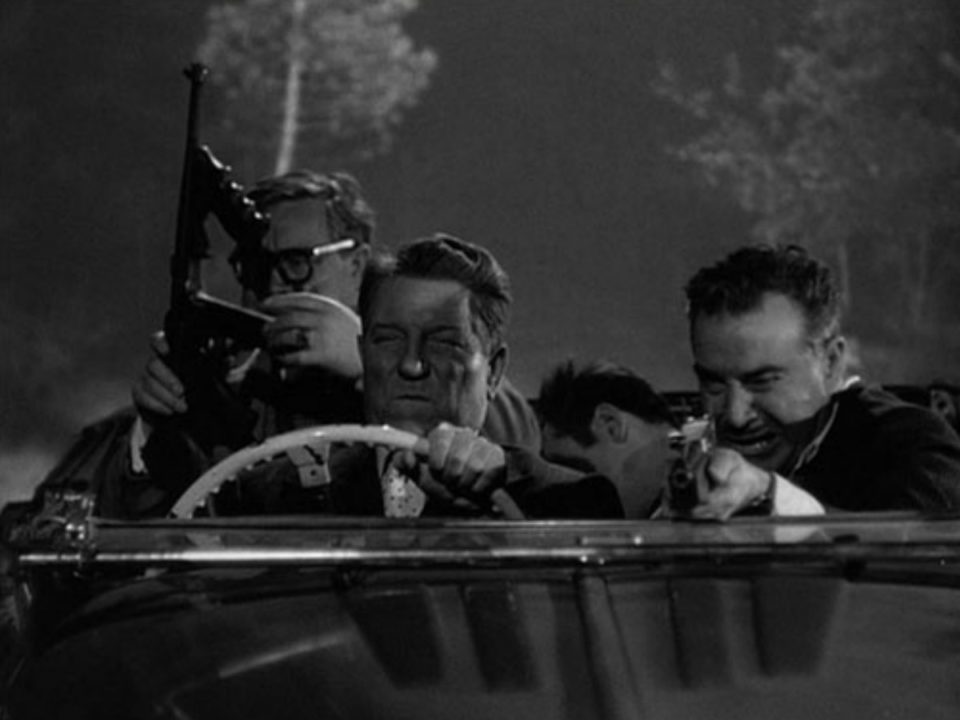 From the very beginning cinema has been fascinated with the character of the gangster.  These onscreen rebels who live outside normal society have undergone many permutations over the years, from hoodlum to organized criminal.  However, my favorite type of gangster is the post High Sierra (1941) professional (and honorable) career criminal and this is the exactly the type of gangster found in Jacques Becker’s 1954 masterpiece, Touchez Pas au Grisbi (Hands Off the Loot).

Touchez Pas au Grisbi is the story of Jean Gabin’s weary gangster Max.  He has just pulled his last big job and all he wants to do is get out with “the loot” and enjoy the fruits of his criminal labors.  Unfortunately, his partner of the last 20 years, Riton, does not share Max’s rigid professionalism and thus begins the tale of how Max loses his loot and his prospects for a peaceful retirement.

Max’s retirement looms large in Touchez Pas au Grisbi.  Max is tired of “the life,” not because he wants to rejoin society or feels any remorse for his parasitic lifestyle, but rather, because he is simply “getting too old for this shit.”  He’s grown bored with the parties and girlfriends a third of his age.  He’s lived that life, and now he wants to try something a little slower.  He’s tired and his body weary.  He has looked around him and decided keep his dignity unlike the other men past their prime who are desperately trying to cling to their youth.

Unfortunately, for all Max’s professionalism, he is only as good as the people he works with–and his best friend Riton ain’t so good.  Because of a mistake made by Riton, a rival gangster (Lino Ventura, completely awesome in his film debut) learns of their last “big job” and takes Riton hostage to be exchanged for the loot.

The relationship between Max and Riton is very well done.  Riton never says he’s sorry, and Max doesn’t go on and on about what a mess he has made of things.  For men like Max and Riton, what is done is done, and them must live with the consequences.  Max’s decision to save Riton after his capture superbly illustrates the “code” that this kind of gangster lives by.   Max knows Riton is a fuckup, but he sticks by him for two reasons.  First, because it was his own choice to work with Riton, and thus, according to his code, the consequences are his to accept as well.  And second, Riton is Max’s friend, and in Max’s business friendship is a rare thing.

Thus, Max, along with his young protege and another old gangster, Pierrot, must ride into glory one last time to save Riton.  You can see the thrill with with Pierrot opens up his hidden crate of machine guns.  You even get the sense that Max, the gangster who has seen it all and is ready to come out the other side, is pleased to be back in his element.  It is a dangerous and bloody mission, but also one that rewards rather than punishes the professionalism of Max.  He charges headfirst into he knows not what, and comes out the other side, hair mussed, but none the worse (or richer) for his effort.  He’s stuck in the game for a little while longer, but when it comes down to it, that’s not the worst thing in the world for guy like Max.

The film is a fascinating glimpse into the mythical world of the career criminal.  Every possible facet of every operation is presented in minute detail, as if the Lord of all Gangsters decided to make the most thorough instructional video ever for new recruits.  Even something as simple as the handoff of the loot for Riton becomes a set piece to rival any famous heist sequence.  And when things go wrong, the ensuing gun and grenade fight is, to put it lightly, rather fucking epic.

So often in these post war gangster films that belong to the High Sierra lineage the protagonists must die in order to show, not the immorality of their actions, but rather their inability to fit into the world around them.  And yet here, Becker seems more concerned with just giving us a glimpse of their world, situated among the rest of us, but lived apart.  Max is an old lech, capable of brutality when it is called for and without a shred of remorse for anything he has ever done.  And yet, because of his adherence to his personal moral code, he is also the most noble character in the film.  Touchez Pas au Grisbi isn’t trying to show the ultimate futility of a life lived outside society.  It is instead just trying to give us a glimpse into a world that exists only on celluloid, where a man like Max is seen to have achieved all he has ever wanted (including a girl from outside his world who he seems to actually like), and yet still says “enough.”  Like all heroes, Max isn’t one of us.  And for that, we love him all the more.