Travels in Middle-earth 74: The Orocarni 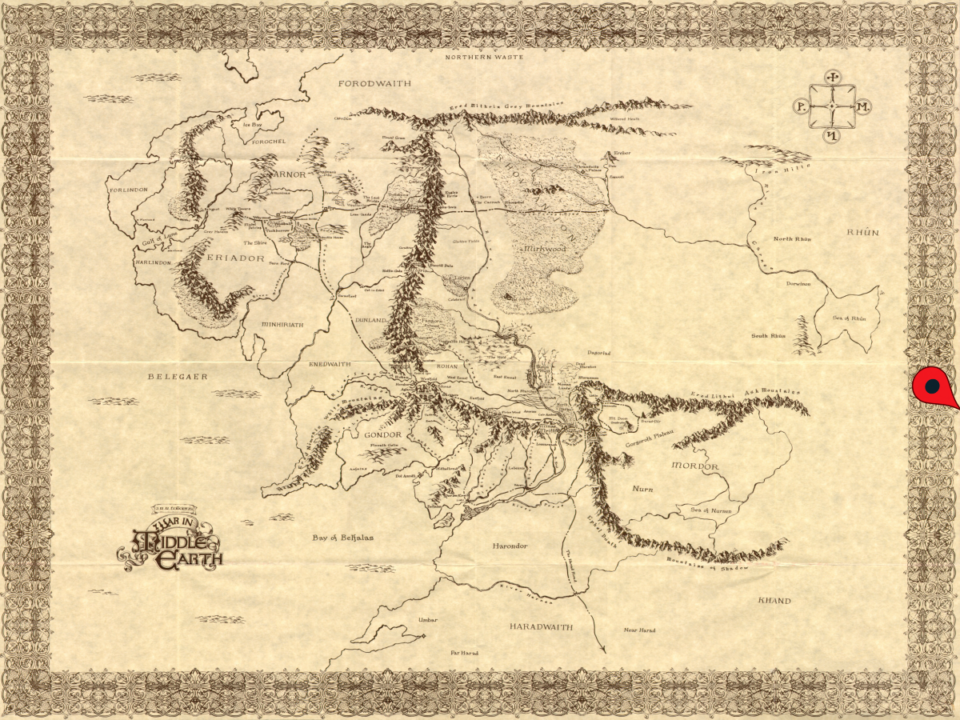 Long ago, in an Age of the Sun far removed from our own, our world was a place of enchantment and lure undreamed of to our current race of Men. However, not all of its wonders have been lost to the mists of time. In this series, I will use advanced crypto-historic techniques to transport you to an elder time–a time of wonder and heroic adventure. For today’s travels, we will journey far to the East, all the way to the Great Red Mountains, the Orocarni.

And on a time it chanced that Oromë rode eastward in his hunting, and he turned north by the shores of Helcar and passed under the shadows of the Orocarni, the Mountains of the East. Then on a sudden Nahar set up a great neighing, and stood still. And Oromë wondered and sat silent, and it seemed to him that in the quiet of the land under the stars he heard afar off many voices singing.

Thus it was that the Valar found at last, as it were by chance, those whom they had so long awaited. And Oromë looking upon the Elves was filled with wonder, as though they were beings sudden and marvellous and unforeseen; for so it shall ever be with the Valar. From without the World, though all things may be forethought in music or foreshown in vision from afar, to those who enter verily into Eä each in its time shall be met at unawares as something new and unforetold.

Though few maps of the elder days detail the lands east of the Sea of Rhûn, last (with the possible exception of the Sea of Nurnen) remnant of the once great Sea of Helcar after the destruction of the War of Wrath, we do have many clues as to its general features, all of which seem to support a recently released reconstruction of the region:

Noted crypto-historians, utilizing primary sources, have noted that the four “lost” clans of Dwarves who dwelt in the Eastern Mountains (Ironfists, Stiffbeards, Blacklocks, and Stonefoots) were separated from their Gundabad bretheren “at distances as great or greater than that between the Blue Mountains and Gundabad.” Combining this information with the few surviving maps of the region and it becomes evident that these dwarven clans dwelt in the Orocarni (The Red Mountains), that ancient range of mountains upon whose southwestern foothills awoke the very elves themselves, far back at the dawn of the world as we know it:

By the starlit mere of Cuiviénen, Water of Awakening, they rose from the sleep of Ilúvatar; and while they dwelt yet silent by Cuiviénen their eyes beheld first of all things the stars of heaven. Therefore they have ever loved the starlight, and have revered Varda Elentári above all the Valar.


In the changes of the world the shapes of lands and of seas have been broken and remade; rivers have not kept their courses, neither have mountains remained steadfast; and to Cuiviénen there is no returning. But it is said among the Elves that it lay far off in the east of Middle-earth, and northward, and it was a bay in the Inland Sea of Helcar; and that sea stood where aforetime the roots of the mountain of Illuin had been before Melkor overthrew it. Many waters flowed down thither from heights in the east, and the first sound that was heard by the Elves was the sound of water flowing, and the sound of water falling over stone.

The forest that blanketed its southern and western slopes was called the Wild Wood, and it was a place of verdant greenery thriving atop new, hungry roots, every burrowing down to those places where no frost can reach. So beautiful was this forest, that, when Oromë, full of the hubris of the Gods, summoned the elves to come dwell with him in Aman, there were those who refused his prideful call:

Many refused the summons, preferring the starlight and the wide spaces of Middle-earth to the rumour of the Trees; and these are the Avari, the Unwilling, and they were sundered in that time from the Eldar, and met never again until many ages were past.

The Avari recognized the beauty of that wild land, and respected their starlit corner of the world beyond all else, even the tree-wrought light of the Valar themselves.