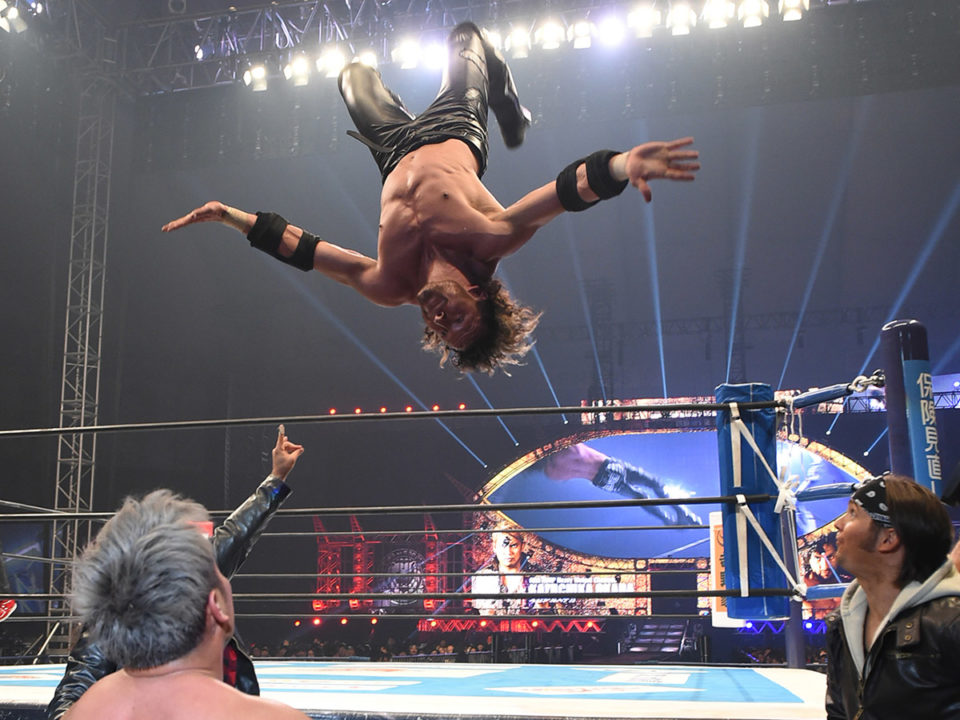 Everyone, at some point in their life, has seen a bit of a professional wrestling match. And, just about everyone probably had the same reaction: “Jesus, that’s fucking stupid, who would watch this?” Well, I regret to inform you: *I* have recently started watching professional wrestling–and I fucking love it.

It really does seem odd to suddenly start watching professional wrestling out of nowhere when one is nearly 40, especially since I never watched it as a kid and thus have no youthful nostalgia to pull me back in. I did briefly watch with some friends around the summer of 2001, but they all moved out the following year and I quickly forgot about it.

Well, I mostly forgot about pro wrestling, there were some elements about that first exposure in the early 2000s that must have always stuck with me like some kind of white trash Ceti eel that never quite got out of my brain:

And sure enough, the utter delight that is Eddie Guerrero’s “the ref is knocked out– time to start cheatin’!” smile would be something that I would think from time to time over the years, but never for long enough to say “I should see if that stuff is still on TV…” However, in the last year, a number of things slowly brought me back. First, John Oliver did a very positive (at least as far as the entertainment value of wrestling itself–less so for the business as a whole) expose on the dire state of general working conditions for WWE wrestlers. Watching, I was again reminded how fun wrestling could be.

Of course, it helped that the first clip Oliver showed was of spoiled cowardly asshole Kurt Angle driving a milk truck down to the ring to spray down Stone Cold Steve Austin–the spot that probably got me watching with more than a casual interest for that summer in the first place:

The next couple of months led me down a youtube hole of old wrestling videos, that eventually led me to casually check out the new promotion AEW last November. Fast forward 3 months, 20 episodes of their tv show, 20 episodes of their Dark show, 6 pay per views, 190 episodes of their sketch show Being the Elite, and one live event…and I suppose you could say I’ve jumped straight into the deep end.

So, what could possibly be so good about wrestling that would compel someone to watch that much of it? I’m honestly not entirely sure, but today’s post is an attempt to answer this question as best I am able.

The standard refrain when one’s wrestling fandom comes up is “wtf, you know it’s fake, right?” However, contrary to what some might say, no one actually thinks wrestling is real. Even the biggest mark on the planet realizes those punches are fake. Hell, even the “IT’S REAL TO ME” guy knows it’s fake, he was just having a “LEAVE BRITNEY ALONE” moment that got a little away from him and was in no way insisting that any of these men were actually fighting.

And really, fake fighting should be a deal breaker. Especially for me, someone with a background in folkstyle wrestling and jiu-jitsu, the vast majority of professional wrestling is an EGREGIOUS affront on how pins, take downs, strikes, submissions, and bodies actually work. Some say wrestling is like watching a movie fight scene, but even the silliest movie fight scenes are far more realistic than anything you’d see in a pro wrestling match, so I’m not even sure that is the answer either.

However, there is something about the fact that you are watching fights, ridiculously staged or not that is kind of appealing if you are someone that likes ass-kicking action movies and, possibly, Badass Books. Sure, the pretend punches might look pretty bad at times, but the kicks and basically everything else, when done right, usually looks amazingly, well, badass:

And, due to half the moves looking like someone just got legit decapitated, they evoke exactly the same reaction in me that I used to have as a kid while reading about Tarzan positively kicking the ass of everyone in the jungle–basically, this:

And there is no denying the ridiculous athleticism involved in professional wrestling. Especially the AEW/indie style of high flying flips and shit, some of the stuff these guys can do is simply jaw dropping–particularly because, unlike a gymnastic floor routine where you land on your feet after a bunch of flips, a pro wrestler always tries to land in a way that looks as painful as possible in order to sell the move as something that would actually hurt were it real:

And, as the “IT’S REAL TO ME” guy will tell you, most of the times, these moves DO hurt, for real:

Seriously, how can you do something like that, to the HARDEST PART OF THE RING, without seriously fucking up your back??

Basically, even though these fights look completely fake, they still impress on a visceral “holy shit how can they do this stuff?” level. Watching wrestling is kind of like watching Jackass crossed with a gymnastics floor routine. In both cases, the fact that what you are watching is REAL contributes a great deal to the appeal–combine them both…and you’ve got pro-wrestling.

The visceral allure of watching over-muscled dudes smashing into each other at high speeds while pretending to fight is only half the appeal however. The other half of wrestling is the world that it builds. Pro-wrestling is capable of telling DECADE spanning stories that build upon each other week after week, month after month, and year after year. Not even long running series like Game of Thrones (ok, maybe The Simpsons) can create worlds with that much backstory. Really, only soap operas (with their non-stop programming and never-ending renewals) are capable of world-building with this level of backstory.

On the other hand, just like how the “fighting” that wrestling does is fake to the point of ridiculousness, most of the “stories” that wrestling tells are not exactly at Breaking Bad levels of complexity. Even the best actors in wrestling, will come off as fairly amateurish when compared to film and TV stars. And for every Golden Lovers storyline (a near decade spanning tale of friendship, love, jealousy, betrayal, and reconciliation) there are 100 “this dude is mad that his girlfriend left him for this dude” stories.

However, just like the stupid looking fake fights, once again, the REALness is what elevates the sometimes rudimentary wrestling storytelling. One of the bigger complaints about WWE is that they force their wrestlers into whatever random storyline the boss decides might work for them at that moment. And, one thing that AEW has excelled at is creating stories for their wrestlers that feel REAL–and they do this by giving their wrestlers creative control over their characters. This doesn’t always work on a company-wide scale, but it excels at letting their characters feel lived-in in a way that pro-wrestling characters don’t always feel.

When Cody, covered in his brother’s blood (real blood, most pro wrestlers prefer not to fake that), reaches out in a heartfelt promo, it feels real because there probably ARE years of real resentment, rivalry, and love behind it:

Of course they planned it, and of course the speech was rehearsed, but the elements of reality behind it come out. Call me a mark, but I think when Cody tears up, the emotion is partly real, in a way that you rarely see in any other entertainment medium. And sure, cases like this are rare, but to some extent, there are elements of this to all of the most successful wrestlers. You believe in them because, despite all the amateurish acting and simplistic story-lines, part of their in-ring charisma is coming from a place of authenticity…even if that place is just that they are deep down “a chill dude that is kind of a slacker”:

That is Orange Cassidy, and he really just hates trying…to the befuddlement of his opponents–and the delight of the fans. If there is a third reason to watch wrestling, it is because, like the milk truck clip that opened this post, the completely over-the-top ridiculous world that wrestling inhabits…is ideally suited for some genuinely hilarious bits of comedy absurdity too.

I’ve done a lot of thinking over the past couple months trying to figure out just what it is I like about wrestling. It really is difficult to pin down (pun intended) just what is so appealing about stupid looking fake punches, bad acting, and simplistic story lines. And, after writing this post, I think the thing that is most appealing about fake professional wrestling…is how real it is. At the end of the day, I guess me and that “IT’S REAL TO ME” guy aren’t all that different after all. Again, call me a mark, but I can’t think of many experiences more thrilling than watching something like this live due to the simple fact that…there’s no way you can fake jumping backwards off a 20 foot cage:

Don’t you want to tell the people about much you love Hangman Adam Page?

“what if Stone Cold did Cowboy shit and also had a lot of feelings”? Does anyone really need his brilliance explained to them? <3