Woman of the Year and The Thrill of it All: Keeping Women in their Place Since 1942 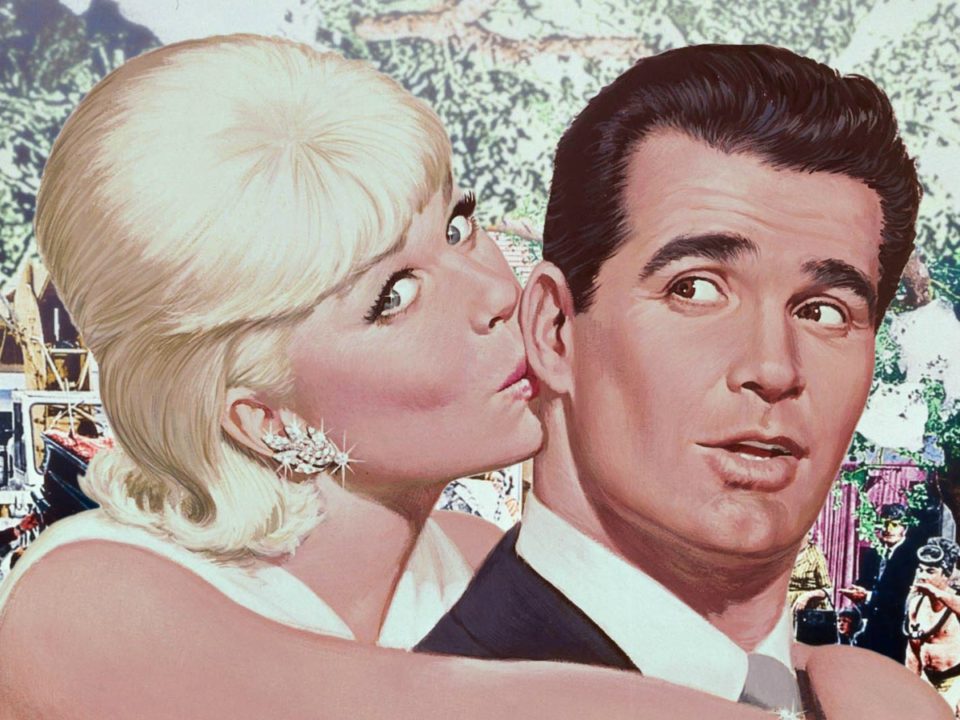 Now I like a good old fashioned battle of the sexes comedy as much as anyone, but it never really sits right with me that the woman always seems to end up “learning her place” at the end of any movie made before 1968. Now I know that times were different and all that, but when so many otherwise good movies end with the female lead returning to the patriarchy the whole thing just feels like a major cop out.

The whole point of these movies are to show the hilarity that ensues when two people with opposing viewpoints who think they are right refuse to back down.  This foundation is scuppered when you set one side up to fail, for the comedic possibilities of an “I told you so” plot are nowhere near as great.

So today I’d like to take a look at a two specific examples of all this with Katherine Hepburn’s Woman of the Year and Doris Day’s The Thrill of it All.  In both movies the central conflict arises from the woman getting a career that (spoiler alert) the woman is forced to abandon by the end in order to be a “dutiful wife” to her husband.  Was it all just a product of the time?  And even if it was, isn’t there a better way to end these movies?  And finally, Doris Day, hot, or not?

Let’s start with Katherine Hepburn and Spencer Tracy’s first movie together in 1942, Woman of the Year.   This is one film that has never quite sat right with me.  Hepburn and Tracy are both highly successful career driven people who fall in love and marry only to be driven apart, not by Tracy’s job, but by Hepburn’s.  After Tracy leaves her she finally attempts to woo him back by going to the kitchen and making him breakfast (which, though it turns out disastrously, I suppose the “thought” of her making the effort to be “a good wife” counted) and he takes her back.

To be fair, he tells her he doesn’t want her to just be his wife, but to be able to find some balance between her career and him.  And indeed he seems to have no problem managing his career and taking care of their adopted son.

So, at first the film seems to be saying that it is ok for her to have her career as long as she maintains some balance just like Tracy is able to do, but subtle bothersome elements lie beneath the surface. Chief among them is the fact that Hepburn becomes almost a caricature of career driven obsession, neglecting her son, ignoring her husband unless she needs him to appear next to her and all together being pretty horrible.

By turning Hepburn into a straw (wo)man, the filmmakers cheapened any kind of commentary they were going to make on strong career driven women and instead turned it into a movie about a woman finding her femininity (in this case: “don’t try to act like a man…you won’t do it right”).

This is not to say that feminine or masculine qualities are not desirabletraits for the respective sexes to display, but this movie goes a step further.  It attempts to equate these traits with real world career and lifestyle choices thus advocating the far more insidious idea that women should not hold positions of power in the world, for if they do they lose all femininity.

So, in all there is a great deal of troubling ambiguity in the sexual politics of Woman of the Year, but it is nothing compared to Doris Day and James Garner’s 1963 film The Thrill of it All.  Doris Day plays the stay at home mom who rocks the boat in her marriage to James Garner’s successful doctor by taking a job doing soap commercials on TV.

Though she becomes a star by “being herself” on TV, it is obvious that her husband has a much more meaningful career both in terms of merit and in the actual dedication and enjoyment he gets out of it.  So from the beginning the deck is stacked against her.  The real problem comes when the hospital psychiatrist tells her husband to fake an affair in order to show his wife what she has driven him to do by choosing work over her wifely duties.

So James Garner goes to great lengths to make Doris Day think he is sleeping with someone else and in the climax of the film she has to help him deliver a baby and realizes how important his job is and what a silly woman she has been and quits her job thus making all well again (without even resolving the fact that she thinks he was having an affair–presumably needing no resolution because it was her fault he did it!)

So here it is the mid 60’s and a woman with a career is still cause for the dissolution of a marriage.  Now, again, this is all pre woman’s lib, so you can’t really complain too much, I’d guess people just thought differently back then.  But part of me wonders about the motivation for making these movies in the first place.  Because while the men who wrote these movies were undoubtedly a bit chauvinistic, I doubt they were diabolical masterminds plotting to keep the country’s women in their places as second class citizens.

Despite the narrow-mindedness of the times I really doubt people thought it was all that funny to watch something designed to show a woman being put in her place.  I mean, on a basic level yes, the same kind of guy who ignorantly loves the Honeymooners because Ralph is always threatening to hit Alice will find the end of The Thrill of it All great, but overall there really isn’t much comedic potential in setting up these women as straw men.  There were plenty of strong female roles even in the early years of Hollywood, and even comedies like Bringing Up Baby where the woman seems to always have the upper hand (which is probably a post for another day  – the annoying reverse sexism of “the man as a doofus” in romantic comedies) were enourmously popular.

In the end I suppose it is just a matter of wanting to make a movie about male female career conflicts but being forced to end with the woman’s comeuppance due to societal conventions.  Women could be strong and independant to a certain degree, but at the point at which they started to get their own jobs you’ll most likely end up with human sacrifice, dogs and cats living together, mass hysteria and the total implosion of society as we know it.

So, with no satisfying solution to explaining these movies perhaps it is best to just move the subject of this post on to judging the female leads based on attractiveness.

So, for the last time, is Doris Day hot? …Katherine Hepburn is obviously not hot.  I mean, I used to think Doris Day was about the unsexiest thing I’d ever seen for a woman who was on the surface attractive.  But I have to admit she’s been growing on me…maybe she could be a little naughty under the foot stamping and self righteous prim and proper attitude.  So what does everyone think, hot, or not?

With that great figure, gorgeous smile, Doris Day is most definitely a hottie!