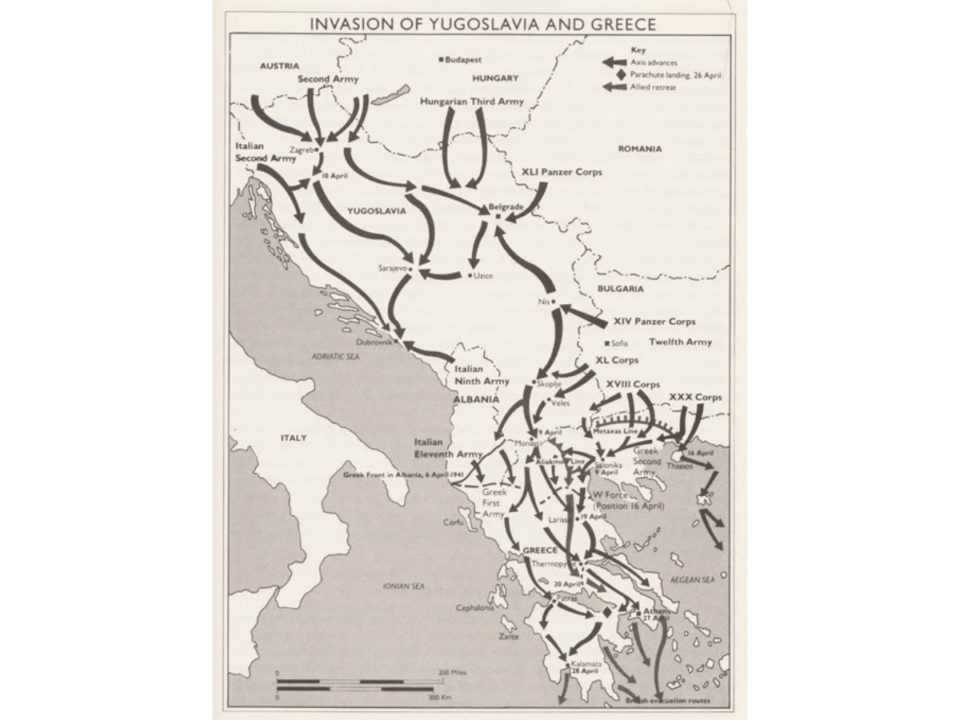 While most people can describe the general details of the Polish and French campaigns in broad strokes (Germany blitzkrieged through Poland…then they did it to France), the Balkan campaign is most often thought of as simply “the blunder that critically delayed the Russian invasion” (which, as I have already written, did not actually delay the Russian invasion since the extended 1941 rainy season would have made a pre June 20th invasion impossible).  But, there is a lot more of interest in the Balkan campaign than its effect on the Russian invasion’s start date, so I thought I’d try to cover the main points today.

By the June of 1940 most of Western Europe had fallen to the Axis.  Germany had quickly subdued Belgium, Holland and France (in addition to Denmark and Norway) after splitting Poland with Russia.  Hitler’s long planned invasion of Russia was his next goal.

However, as the German juggernaut was conquering Europe, Mussolini began to feel a little inadequate.  To date, Italy had only conquered (more like occupied) Albania and Mussolini had decided that he wanted to conquer something else before Hitler got all the good countries.  By the time Hitler had gotten Romania (along with Hungary and Slovakia), an Italian ally, to sign his Tripartite Pact, Mussolini decided enough was enough and decided to invade Greece in October 1940.  Hitler was more than content with his ally’s decision as he preferred to focus on controlling the more inland Balkan countries (Hungary, Bulgaria, Romania) himself.

Unfortunately “Il Duce wants to attack someone too” did not have quite the mythic power of the Nazi propaganda machine’s “thousand year Reich of Germanic pride” to motivate his soldiers.  So, despite outnumbering and, on paper, outclassing their opponents, the overall low Italian morale (along with Turkey’s diplomatic threats to Bulgaria which allowed Greece to call in its Thracian (Northeast Greece) forces against the Italian invasion and thus “unsplit” its army) led to a quite embarrassing Italian defeat.

Cleaning up the Balkans (in this case, primarily Greece), while not essential for Hitler’s Russian invasion, was becoming more urgent as Italy seemed unable to finish the job and the British troops in Greece could eventually threaten Romanian oil fields if the Greeks granted them larger air bases.

Hitler also wasn’t about to let his ally’s embarrassment go unresponded to and decided to commit himself to cleaning up Italy’s mess (something he would have to do more than a few times over the course of the war).  You could say a lot of nasty things about the Fuhrer, but at least you couldn’t ever say that he didn’t have his boy Mussolini’s back.

So how does Yugoslavia play into all this?   By February of 1941 Turkey had withdrawn its threats of reprisal against Bulgarian aggression into Greece and by March Bulgaria had signed the Tripartite pact as well leaving Yugoslavia surround by Axis countries and Greece.  But logistically Albania and Bulgaria would not work for a Greek invasion (Albania could only be reinforced by sea, Bulgaria’s transportation system was too primitive).  It was around this point that Yugoslavia’s desperate pleas for neutrality began to fall upon deaf Nazi ears.

By the 25th of March, with the surrounding countries that were not named Greece growing ever more full of Nazi troops, Yugoslavia finally realized the hopelessness of its position and signed the Tripartite Pact as well.  However, two days later a military coup by Serbian officers overthrew the government and stated in no uncertain terms that they would never bow to Nazi aggression.

This coup, while theoretically a brave stand on principle, was in practice one of the most pointless decisions by a sovereign nation of the war (or at least right up there with Hitler’s bizarre declaration of war on America after Pearl Harbor).  As Hitler put it, “I have decided to destroy Yugoslavia”.  Not only did he now have the diplomatic “right” (against the “illegitimate” government) to move against Yugoslavia, it was a move he was sure to make as control of Yugoslavia’s rail system (which went into Greece as opposed to the Bulgarian rail system) was the last piece he needed for his plan to crush Greece.

On April 6, 1941, the simultaneous attack on Yugoslavia and Greece commenced.  In only two days the million strong Yugoslavian army had been defeated at the cost of 151 German casualties.  As one Greek position after another was outflanked by the German armored spearheads Greece fell in only 3 weeks.  The British troops even tried to make a stand at Thermopylae just like in the movie 300.  But apparently all Persia needed back then was armored tanks as the British were quickly overrun.

Not only had the Yugoslavian and Greek forces been outclassed by the invaders, but they were also extremely poorly led.  The Yugoslavians had tried to evenly defend a thousand mile long border and thus were weak everywhere, while the positions they shared with the Greeks were so vulnerable to outflanking that if one were to collapse, the whole front line would be rolled up (which is exactly what happened).

In all the Balkan campaign had been as great of a success as France and Poland had been.  While it was true that Hitler had not initially intended to occupy Greece, the Greek capitulation was so quick that the increased level of involvement ended up not making much difference after all.  As I pointed out earlier, the unusually long Russian rainy season meant that rather than it being an entanglement that resulted in a massive delay, it was in fact a valuable use of off-time to wipe out a potential Allied base of operations against Axis resources.  There was even time for the successful (though just barely) invasion of Crete to wipe out the evacuees, but that is a story for another post.

As for poor Yugoslavia and their foolhardy defiance; they were subjected to 3 years of occupation, an ultimately ineffective (as I discussed on an earlier post) resistance movement, civilian reprisals and civil war.  But at least they didn’t look like pussies.

If anyone is really interested by all this, I have to recommend John Keegan’s Second World War (where I got the majority of the information for this post), an exhaustive yet entertaining read that will tell you everything you ever wanted to know about World War Two. It also seems fairly unbiased and doesn’t make many outlandish claims.

Can we get some sources cited here? I want to make sure my history lesson isn’t coming from the ASL rulebook.

Are you implying that the ASL rulebook is not a reliable source? I’ll have you know it is the single most complete reference on the guns and tanks of WW2 in print!

Heh, but I get most of my info from John Keegan’s Second World War with random other books and wikipedia filling in the gaps. I added an addendum at the end to this effect.

I suggest you also pick up a copy of Mummy: The Resurrection by Whitewolf. That way you can do a proper analysis and decide once and for all which ranks supreme: tanks or mummies.

If you have any interest in the Manhattan project, I read a really great epic history (the first third of the book is a history of the science leading to nuclear science) of it a few years back: The Making of the Atomic Bomb by Richard Rhodes. If you dig it, there’s also a sequel about the hydrogen bomb called Dark Sun.

I want to make that into a “that’s what she said”. But no matter how I play with it I just can’t seem to make it work.