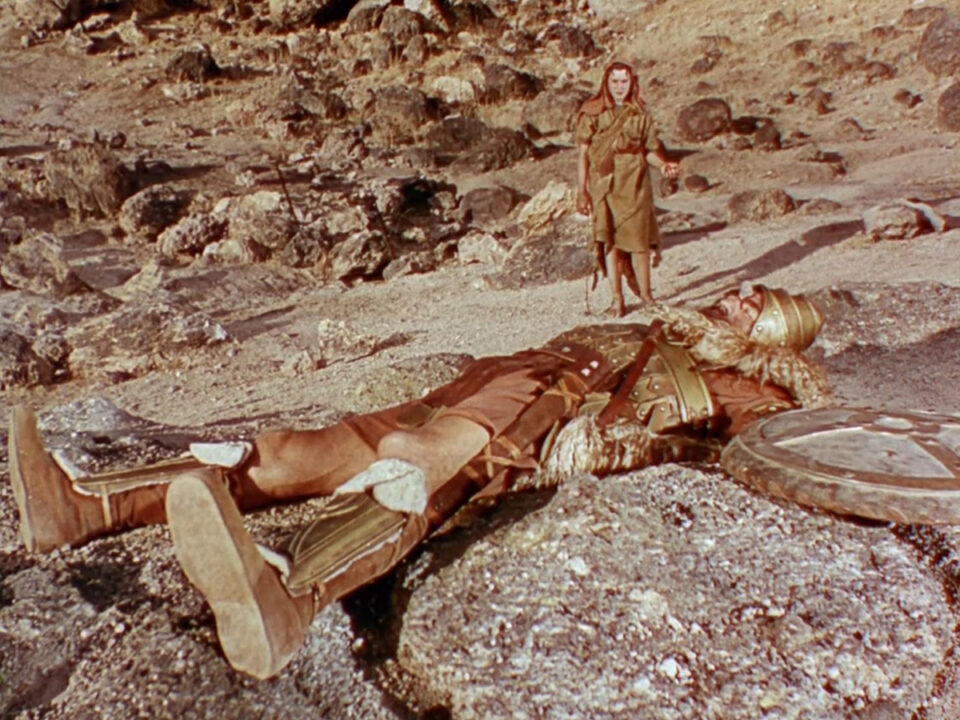 Though I have no formal religious education, I have actually learned a fair bit about Christianity over the years, both via apophatic deduction applied to my metal collection, and, through cinema.  In this recurring series, I feature a classic biblical movie (typically of the “epic” variety), and discuss just what one can learn about Christianity by watching it.  Today, I will look at the a steamy little tale of rape and murder called David and Bathsheba.

Going into the film, I didn’t know much about King David. Only that he was a good dude [Narrator: He wasn’t] who may or may not have been the same David that slew Goliath [Narrator: He was]. I mean, biblically speaking, I suppose he was a good dude in comparison to other Old Testament kings, but, even the sanitized movie version of David turned out to be a rather colossal piece of shit.

So, here are the top 18 (one for each wife David was legally permitted to have) things I learned from David and Bathsheba (1951).

The opening title cards do their best to catch you up, but there is a fair amount of United Tribes this, Ammonites that, Joab him, and Rabbah there before you can even get to the first scene of David leading from the front and shrugging off flesh wounds as he crushes his enemies, sees them driven before them and lusts after the lamentations of their women.

2. There has been a shift in power since Moses.

Last we saw the Jews (CSS 3: The Ten Commandments) they definitely weren’t in charge. Fast forward 300 years and Pharoah has turned into a Beta male weakling that bows to Chad David. Ramses was surely rolling over in his sarcophagus.

Young Absalom and Amnon really seem to be shit kids. I did a little research after the movie to see which was worse…and let’s just say…the “bad one” was shockingly NOT the son (Absalom) who set up a tent to publicly fuck each of his father’s wives in turn in front of the whole city.

4. David was lousy with wives.

He wasn’t still fucking the old ones, but he had more wives than Goliath was cubits tall.

After some light balcony bath-peeping, David used the mutual acquaintance of Uriah (last name Heep?) to slide a few soldiers over to invite his wife Bathsheba over to his palace while Uriah was out on the battlefield. SKETCH. My first hint that maybe this was not a great man (just wait Isley, you sweet summer child).

6. Gregory Peck was an actor in God’s own image.

I realized that if you have a shitty dude that you are trying to get over as the greatest king of Israel, getting Atticus Finch to play him in the movie is absolutely the way to go. Gregory Peck somehow sails right past self-righteous and back to selfless with a few simple wry smiles and that measured deep voice.

Bathsheba seems reluctant to get with David, but it seems the rumor he spread about how he has “never found a woman to please him yet…” finally worked its magic.

In the bible it was a pretty blatant rape…that turned into…love? The movie tried to make everything a little more palatable by explaining that Bathsheba KNEW David would be watching her, thus the bathtime strip tease. And she was only pretending not to want him until she knew he wouldn’t rape her. Which, again, low bar, but I guess this is better than the bible version.

9. David was a voyeur AND an exhibitionist.

David and Bathsheba then start screwing all over the kingdom, including one scene where they prepare to fuck while laying literally 20 feet from some shepherd kid and his flock of sheep. Bathsheba isn’t so sure she’s into the kid watching, but David tells her not to worry:

10. David is an unreliable narrator.

David STRONGLY suggests the whole Goliath story may have been embellished a bit. Maybe the famous giant was, in reality, just a little stocky.

11. Ark of the Covenant’s powers and abilities were formidable.

I didn’t realize this was an Ark story too, but based on its portrayal here, the Ark from Raiders of the Lost Ark was pretty accurate. Though in this movie touching the Ark will just give you a heart attack (RIP the clumsy soldier that bumped into it) instead of melt your fucking face off.

I’m not just talking about his zero interest in his hot wife–maybe he just wasn’t into women, more how completely oblivious he was to David’s all too obvious machinations.

14. David was pro-life only for unborn children.

Like most pro-lifers, David’s dedication to the cause stopped after birth. Once Uriah decides to sleep with his bros in the barracks rather than his suspiciously-into-him wife, David’s next plan is to trick Uriah into Leroy Jenkinsing the Ammonites and then pulling back all his forces (not so fast Uriah) and let the enemy solve his problem for him.

I mean, David is a dick too, so maybe when God said he was a man created after his own image, he knew what he was saying, but the dickish deity let loose a shotgun blast of punishment that hit just about everyone in Israel but David. A drought, a tornado, people dropping like flies all over the kingdom, and then the asshole even kills the newborn baby, which, considering David’s offspring, wasn’t really a punishment. I mean, really, who needs yet another son to grow up only to have all your wives run a train on him in front of the whole city?

Seriously, I haven’t seen such a killjoy since Moses busted up that bitchin’ party at Mount Sinai. Nathan is the kind of guy that absolutely joined the police academy as soon as he got his GED. That dude got invited to NO parties.

17. David’s old and unfuckable wife and Absalom ratted him out.

Though, honestly, I’m not sure anyone needed to tattle since every shepherd boy in the kingdom definitely knew the “secret” too.

Like all powerful dudes that got cancelled, David quickly finds god and all is forgiven. He even tells Nathan how, after repenting he touched the Ark and God spared his life in a sign that all was really forgiven. …touched the Ark in a room (tabernacle) with no one around. Our favorite unreliable narrator couldn’t have made that up, right?