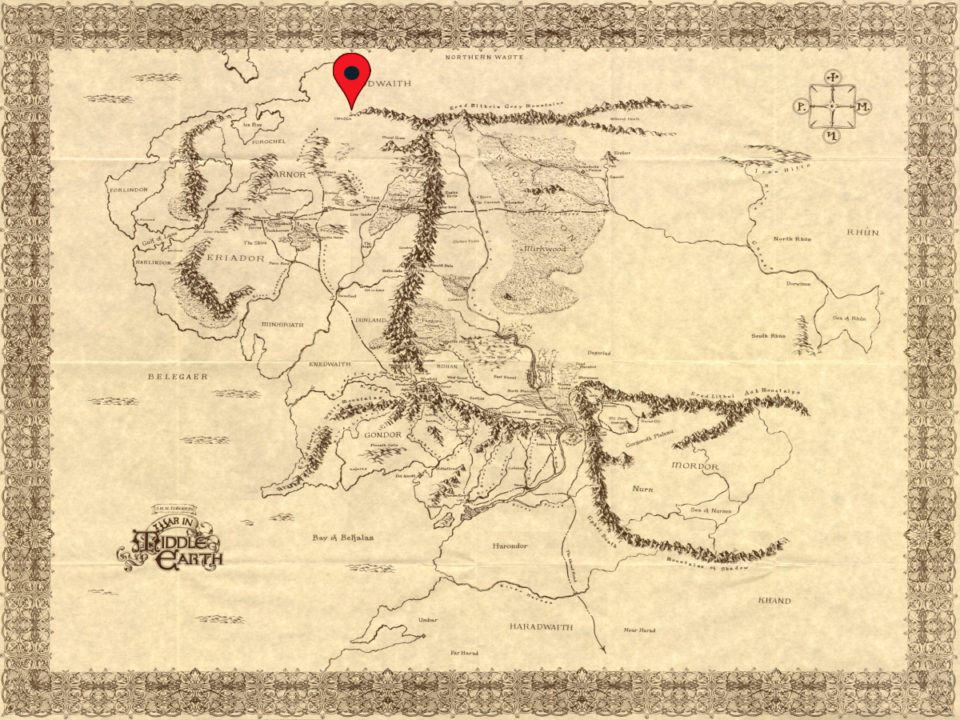 This month I’ll be discussing the Northern lair of the Witch-king, Lord of the Nazgul.

‘What in the name of wonder?’ began Merry, feeling the golden circlet that had slipped over one eye. Then he stopped, and a shadow came over his face, and he closed his eyes.  ‘Of course, I remember!’ he said.  ‘The men of Carn Dûm came on us at night, and we were worsted.  Ah! The spear in my heart!’  He clutched at his breast.  ‘No! No!’ he said, opening his eyes.  ‘What am I saying? I have been dreaming. Where did you get to, Frodo?’

After the defeat of Sauron at the end of the Second Age by the last alliance, many of his servants nursed their wounds in hiding as the centuries passed.  However, when the sons of Earendur divided the North kingdom of Arnor into the three realms of Arthedain, Cardolan and Rhudaur in the year 861 of the Third Age, Sauron’s shattered spirit began to form the seeds of a plan to take advantage of the now split kingdom of Arnor’s weakness.

Around the year 1300 T.A. Sauron sent his most dreadful servant, the Lord of the Nazgul, to found the kingdom of Angmar, the iron home.  It was a cold windswept place on both sides of the northernmost range (which in those years came to be known as the Mountains of Angmar) of the Misty Mountains that stretched out to the Northwest of Mount Gundabad.

The Northernmost peak of the Mountains of Angmar was the site of the Lord of the Nazgul’s fell stronghold Carn Dûm from which he ruled his kingdom as “The Witch-king of Angmar.”  Named for the long red valley at the base of the mountain stronghold, Carn Dûm glowed with an evil red light each sunset.  Such was the power of the Witch-king’s ensorcelments that the savage hillmen that dwelt in the lands about Carn Dûm soon fell into thralldom to his black malice.

Soon after the Witch-king established his new kingdom an opportunity to destroy Arnor presented itself.  With the ascension of Argeleb I, son of Malvegil to the throne of Arthedain, Cardolan and Rhudaur no longer had a direct line of descent to Isildur and thus Argeleb I claimed full rulership of Arnor which led to much strife with the realms of Cardolan and Rhudaur.

Rhudaur soon came under the rule of Northern hillmen usurpers and thus fell under the influence of the Witch-king.  In 1356 Angmar and Rhudaur launched the attack on the Weather Hills that led to the death of Argeleb I.  Though the Weather Hills were defended, the Witch-king attacked with an even greater army fifty years later in 1409 and destroyed the Tower of Amun Sûl (the palantir, as we know, was saved) and occupied Rhudaur until his eventual defeat by a combined force of elves and Dunedain.  It was in this battle that the last prince of Cardolan fell–the same prince in whose burial mound Merry was captured by a Barrow Wight.

Aside from sending out evil spirits to haunt the barrow downs of Tyrn Gorthad after the great plague of 1636, the Witch-king was not to seriously threaten Arthedain until 1974.  At that time he finally captured Fornost and drove its people out.  However, in his pride he met the following year’s counterattack by Eärnur and Cirdan outside the city instead of from within its walls and was thus routed from Fornost.  Before his retreating forces could reach the safety of his fortress at Carn Dûm, the Witch-king was overtaken by the Gondorian cavalry and the elf lord Glorfindel’s forces from Rivendell.  A great slaughter ensued which left not a man or orc of his army alive West of the Mountains of Angmar.  However, the Witch-king’s foul radiance proved fearful enough to cause Eärnur’s horse to flee in terror at a key moment and thus he was able to escape back to Sauron.

Eorl the Young, lord of the Men of Éothéod who were living around the source of the Anduin at the time, soon cleared the lands of Angmar East of the mountains of the remnants of the Witch-king’s evil folk.  And thus the realm of Angmar that the Witch-king had ruled for the last 700 years was abandoned.  However, its evil was not soon forgotten by the inhabitants of the North.  Even during the time of the Lord of the Rings, Carn Dûm, standing high at the head of the red valley, remained a dark place full of lingering evil magics where none would dwell.

Fixed…you are probably right about the routing horse…I was caught up in the thrill of battle when I wrote this this morning I guess!

Heh, thanks, updated…the Tolkien community has been very helpful in proofreading these 🙂

You’ll see a lot of NoJoy comments on these posts, he’s going to be pissed he missed these 😉