Middle-earth Monday 14 – The Mountains of Mirkwood 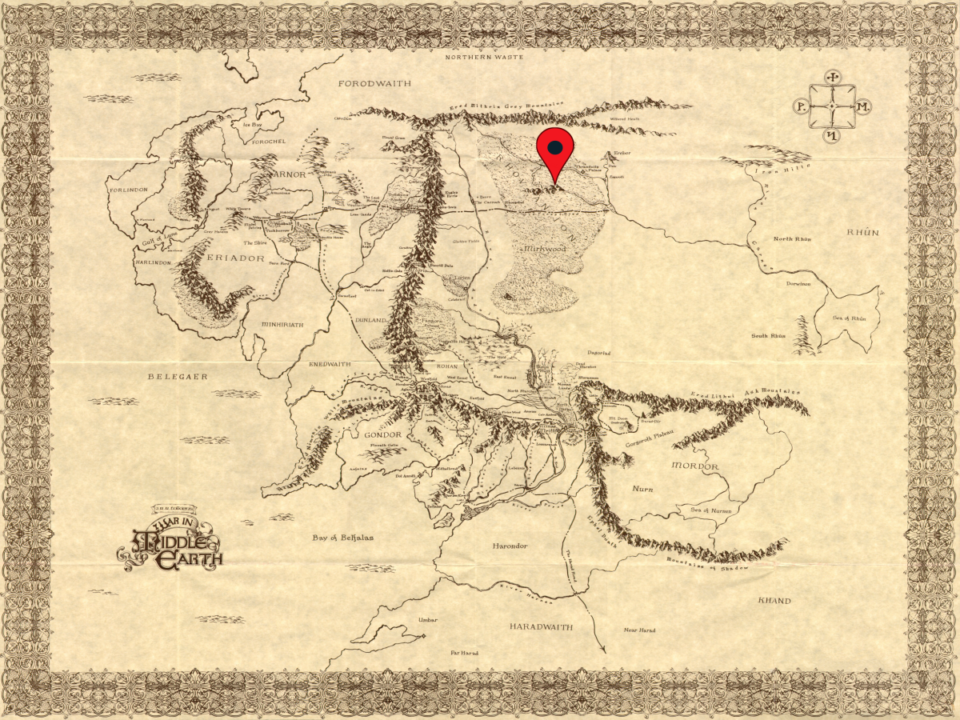 This month I’ll be discussing the hidden mountains deep within the great vast forest of Mirkwood.

We came on his trail and that of some Orcs, and it seemed to plunge deep into Mirkwood going south and west; but ere long it escaped even our skill, nor dare we continue the hunt, for we were drawing near the Mountains of Mirkwood in the midst of the forest, and they are become evil, and we do not go that way.

The dark branches of the great vast forest of Mirkwood hid many things from the outside world, the most obvious of which were the Mountains of Mirkwood.  Perhaps it is a slight exaggeration to call the small range (located in the 80 miles of dense forest between the Old Forest Road and the path that Bilbo and the dwarves took in The Hobbit) “mountains,” but their steep rocky slopes were far too impressive to be called mere “hills.”  Dense fir trees lined their slopes up to their pointed peaks, thus hiding the range from the sight of any tree climbers who might have made it above the canopy to get their bearings.

During the time before the rise of Sauron’s stronghold of Dol Guldor in Southern Mirkwood, the forest was called “Greenwood the Great” and the mountains were called the “Emyn Duir” (the “dark mountains”–so named for their dark trees rather than any fell creatures who may have haunted their slopes).  Elven King Oropher (father of Thranduil, grandfather of Legolas) even dwelt in the western glens at the base of the Emyn Duir towards the end of the Second Age (before his death in the War of the Last Alliance when he prematurely charged the Black Gate).

However, by 1050 of the Third Age, a new power had risen at Dol Guldor and many fell creatures came to inhabit the once great forest and twist its branches to their dark ways.  The mountains with their many crags and hollows were especially infested with the twisted serpents of Sauron.  The forest was called Greenwood the Great no longer, instead it was called Taur-nu-Fuin (the forest under night) and the mountains came to be known as the Emyn-nu-Fuin (the mountains under night).  In the aftermath of the War of the Ring when the shadow proved to be but a passing thing and the evil was driven from the forest and the small mountain range, Thranduil and Celeborn renamed Mirkwood “Eryn Lasgalen” (the wood of greenleaves) while the mountains reverted to their original name.

However, it was not simply the evil of Sauron that gave the mountains their mysterious reputation.  Within their fir lined slopes lay many other secrets far older than any one, man, elf or orc suspected.  As just one example, somewhere, deep in their rocky slopes, was the wellspring for the enchanted river that caused sleep to overcome anyone who was immersed in its dark waters.  The trees of Mirkwood held many secrets, and, despite their size, the mountains of Mirkwood were the least of them.

And am I right? Oropher is totally the original Leroy Jenkins…

I’m sure he meant well. He probably just wanted to level up.